Charles Webster Hawthorne (1872-1930) was born in Illinois but raised in Maine. His father was a sea captain. When Charles was eighteen, he went to New York, worked in a stained glass factory by day and studied at the Art Students League at night. His early teachers were George de Forest Brush and Frank Vincent Dumond. His biggest influence however was William Merritt Chase.

Chase founded the Shinnecock Hills Summer School in Long Island, NY in 1891. Hawthorne became one of his pupils and eventually worked as his assistant for several years. Chase was renowned for his outstanding demonstrations, but it is noted that Hawthorne surpassed him in this ability. Hawthorne opened his own summer school in 1899. The Cape Cod School of Art was the first outdoor summer school for figure painting. Because of his exceptional power as a demonstrator, students came to realize what a great gulf there was between them and a master. Seeing the perfectness of his first spots of color…and that they could be so stated…caused them to implicitly trust his teaching. His outdoor classes were huge, by 1915 he had 90 students enrolled. Students could stay in a Provincetown boarding house and rent a studio for $550.00 per year.

I wrote an extensive article on Hawthorne and his teaching in an earlier blog. This one will add additional insights into his teaching. You may access the earlier blog post at the end of this one. (Click images to enlarge) 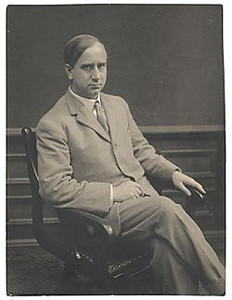 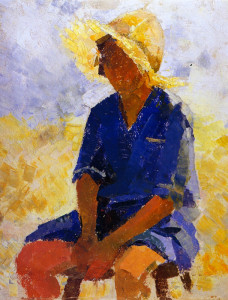 “You must feel the beauty of the thing before you start. You cannot bring reason to bear on painting – the eye looks up and gets an impression and that is what you want to register.”

In the following quote, Hawthorne seems to indicate that “reason” is a hindrance to excitement, and aesthetic emotion; of course, I disagree. Here’s what he says, “Good painting is an excitement, an aesthetic emotion – reasonable painting destroys emotion. Painters don’t reason, they do. The moment they reason they are lost – subconscious thought counts.”

Don’t strain for a grand subject – anything is a painter’s fodder.

“Don’t paint thinly as a student – later you will, but there will be something lacking unless you first learn to paint with more pigment. Paint with freedom, it gives you more mastery of the nature of paint. Make a lot of starts; wait till later to try to finish things. Do three or four of these studies every day, and leave the picture making to those who call themselves artists. First become the painter and the artist will take care of itself. Paint with a broad firm brush, loaded with color, noting values frankly. The feeling for color will come and grow. Swing a bigger brush; you don’t know what fun you are missing.” 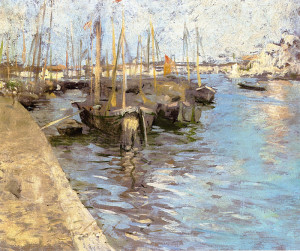 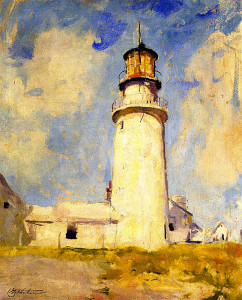 “We must all teach ourselves to be fine, to be poets. Spend a lifetime in hard work with a humble mind. In his attempt to develop the beauty he sees; the artist develops himself.”

Oil painting has its limitations. We can’t paint nature; it is all a big prevarication, but we have to tell a convincing lie. You can make only a sign language for sunlight.

“Separate into big passages of light and shade. Get the big simplicity of foreground in relation to the mass of sky. Work for simplicity more. Keep the lights together, the darks together. Gather together the big lights and shadows, don’t break them up.” 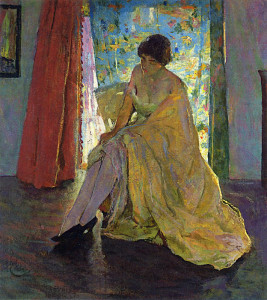 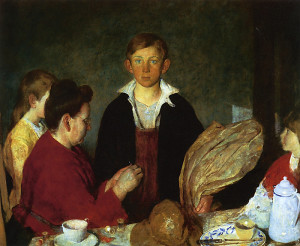 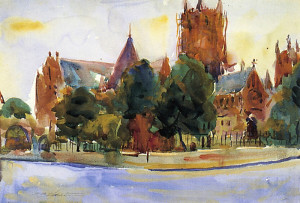 Hawthorne recommends that painters have settled in their mind what interests them most about a subject. “There isn’t room in your consciousness for more than one sentiment about a thing. Tell that one.”

As a test to anyone who thinks he can paint pretty well, let him take a dishpan, fill it half full of water and put a slice of lemon in it or something to give surface, and try to paint it to get some quality in it.

“Be always looking for the unexpected in nature, do not settle to a formula. Get into the habit of doing what you see, not what you know. Human reason cannot foresee the accidents of out of doors. Humble yourself before nature, it is too majestic for you to do it justice.”

“The first color you put down influences you right straight through. Do not put things down approximately – you will start with a wrong note of color and unconsciously key everything to it, making all false.”

Painting is just like making an after-dinner speech. If you want to be remembered, say one thing and stop.

“Have a humble attitude. To see things simply is the hardest thing in the world.”

It’s almost here! To be released in November. Click HERE for a pre-release discount. It’s going to change the way you think about color. 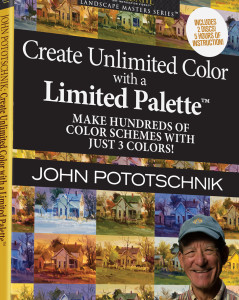