In 1990, after 45 years, I was able to visit the place of my birth for the first time…38 Treverbyn Road, St. Ives, Cornwall, England. I not only wanted to see where I was born but I was also interested in the artistic heritage of St. Ives, and that of the nearby town of Newlyn.

I have wondered what my life would be like today if I had remained in St. Ives. What would I look like, would my skin be ruddier and my eyebrows bushier, how would I sound, would I be an artist, how would my beliefs and attitude differ, who would be my friends?  It’s all interesting to contemplate, but of course, none of the questions can be answered. I do, however, appreciate being linked to the artistic heritage of St. Ives in Cornwall County.  (Click images to enlarge) 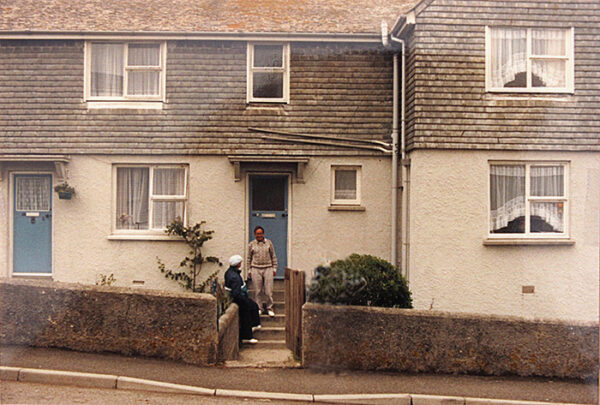 Right there on the upper floor to the right is where I was born. My mother was 13 when her parents and four siblings moved into this place. It was one of a large group of houses built by the St. Ives Town Council. Number 38 was one of three houses located in one of these buildings overlooking St. Ives Bay. Years later my father, stationed in England with the US Army, met my mom, they married in St. Ives…and the rest is history.

Just twelve miles south of St. Ives is Newlyn.  Newlyn and St. Ives, in the late 1800s, were important art centers. Artists were drawn to these remote fishing villages for their light and natural beauty. There in southwest England they could  live inexpensively, focus on the life of the local fishing community and the everyday workings of the harbor and dock. Newlyn, and its artists, became identified with Naturalist movement. 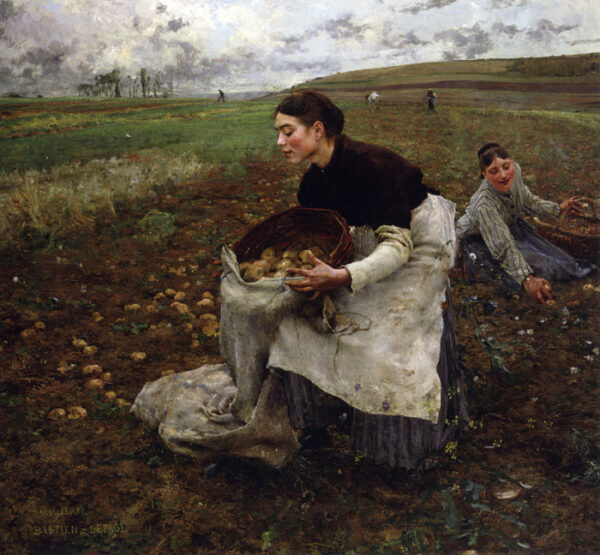 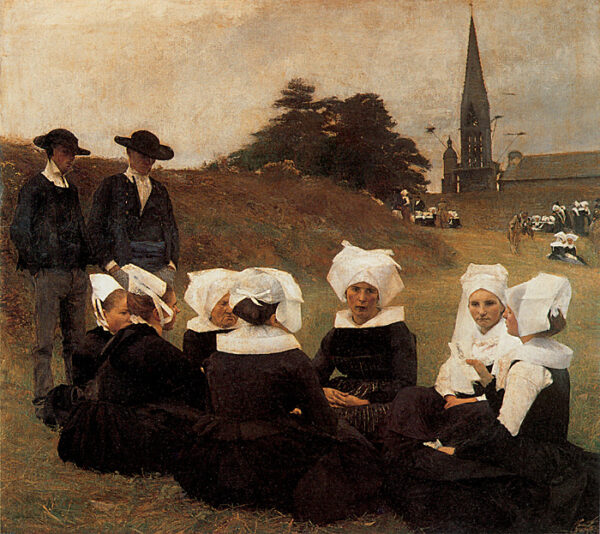 Naturalism (late 1870s – early 1890s) was primarily a French movement that spread rapidly across Europe. Jules Bastien-Lepage, although not directly associated with any of the ‘schools’ of Naturalism, became a figurehead of the international movement. (When Lepage died at the early age of only 36, his dear friend, Pascal-Adolphe-Jean Dagnan-Bouveret, carried on the tradition). Lepage depicted the landscape and inhabitants of his native region with an accuracy and intensity that was almost photographic. That, with other criticism, actually became one of the loudest objections to the Naturalism movement. Remember also that several art movements were vying for the public’s attention and acceptance at the time: Classicists, Romantics, Realists, Impressionists, and Naturalists. Not surprising, all were being criticized for one reason or another.

“The work is too factual, too scientific, too photographic, too closely linked to the academic tradition, lacks personal expression, is an obstacle to innovation, and is more concerned with method rather than content. The naturalist merely paints the spectacle of life around him, its vices and ugliness, its beauty and sweetness, not preferring one to the other and commenting on neither.”

The Naturalist’s goal was to capture a “slice of life” through images that were linked to country or urban life. They selected themes of daily life often featuring working people, depicted in a non-sentimental way…warts and all. Because of their stated goals, landscape was only viewed as a stage for the depiction of the human figure. They sought to achieve “nature in landscape, character in portraiture, and humanity in genre painting”. To achieve this phenomenal realism, some of the artists built outdoor glass studios (much like a greenhouse) in which they posed their models and produced detailed studies of them in a controlled rustic setting. 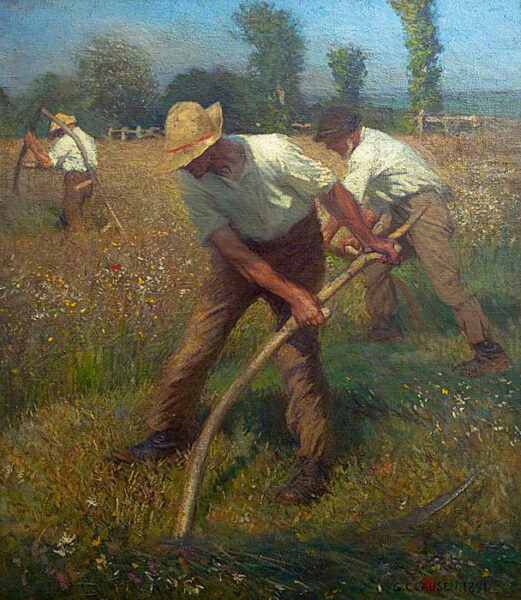 In defense of the Naturalists, much like we do today, they were only taking advantage of the latest technological advancements being made in photography. They may be considered the first photo realists. Using photos, combined with drawings, oil sketches, and finished oil studies of their subjects done from life, they were able to construct very detailed, highly refined, sometimes life-size paintings from this material…a new type of painting never before seen was the result.

I think the major difference from the Naturalists and many working from photos today is that the artists of that day were academically trained. They possessed a mastery of drawing, human anatomy, and composition that provided a solid foundation for their use of photography. The photo was only a source of note taking that enabled them to achieve a level of detail and refinement that stunned the art world of its day. 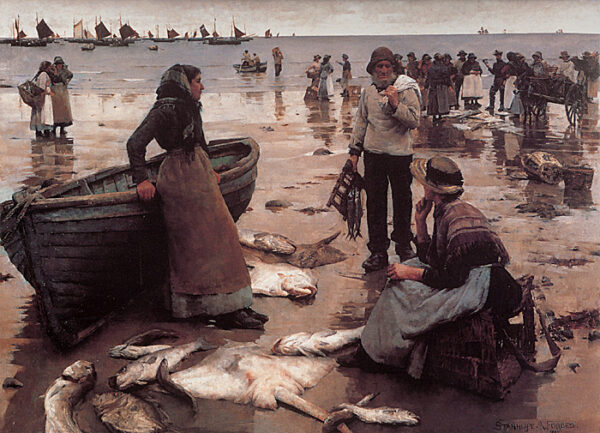 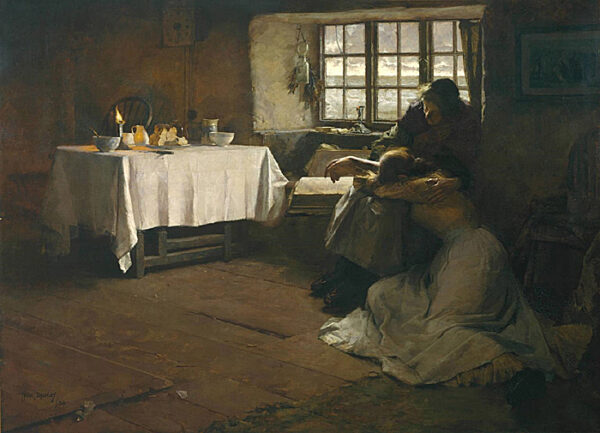 The Newlyn School, founded by Stanhope Forbes and Walter Langley, was a powerful representative of the Naturalist movement in England. Along with Forbes and Langley, George Clausen and Frank Bramley are also my personal favorites from that tiny art colony based in Newlyn. 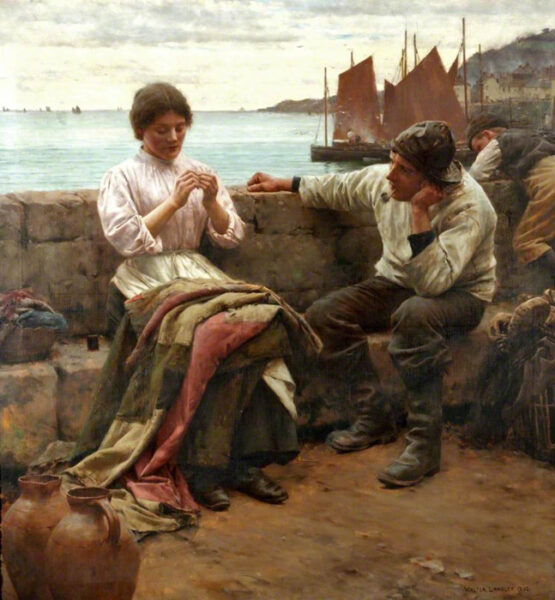 Arriving in Newlyn, I was most anxious to seek information concerning these artists. I hoped to see their original paintings and maybe even be able to connect with painting instructors working in the tradition of these great painters.

I did locate the Newlyn Art Center. There was a plaque, commemorating Mr. Forbes, on the building’s facade. The great optimism with which I entered the art center was quickly dispelled when I noticed the walls covered with the most disagreeable abstract expressionist paintings. Upon inquiring about Stanhope Forbes and the Newlyn naturalists, the very knowledgeable director said that the “Newlyn School is a thing of the past. It had its day but is now, I suppose, ‘old hat’. Also, there are no artists of their quality around anymore.” 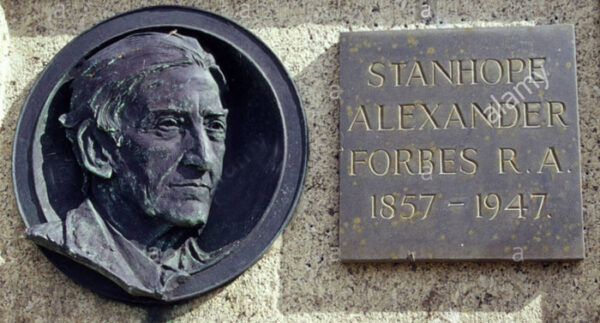 Following Impressionism, the move toward ever more “modern”, non-representational works, won out. Naturalism, like many art movements before it, ran its course. Sound training eventually became a hindrance if one wanted to be free to express themselves. This led to almost a century of various “isms”, many of them of little worth.

Today, things are changing. Many ateliers have sprung up that are embracing the academic training of the French Academies. Young students are hungry to learn the long established methods of the masters. Realism is finally on the upswing. The young generation coming up is already producing some incredible work.

Source for some of this article: Beyond Impressionism, the Naturalist Impulse, Gabriel Weisberg – Harry N. Abrams, Inc. 1992