The Naturalism movement swept through Europe and lasted for only a brief 20 years. It began in France in the late 1870′s and by the early 1890′s was already in decline. The godfather of the movement was the brilliant Jules Bastien-Lapage, who died at the young age of only 36, and yet he fathered a very amazing group of devotees throughout Europe. 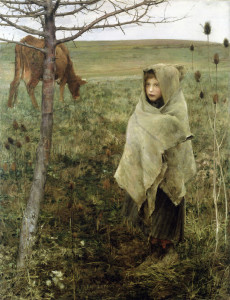 At the same time, another group of young artists dubbed, Impressionists, were also on the move. They had grown restless and tired of what they considered to be the same-old worn out traditions of the French Academy. Feeling that the Academy works had become too “predictable”, a tension was created between the old academic way and a new way.

Adding fuel to the growing tension was a rising middle class anxious to purchase art they could relate to. They sought images that represented their daily lives. As scientific discoveries increased, writers and critics began calling for the “Modern”…for change…for an art that reflected the times. At first the Impressionists were ridiculed, but in time art critics, journalists, even collectors began to shift their support to those expressing discontent with the academic tradition. 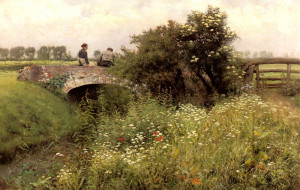 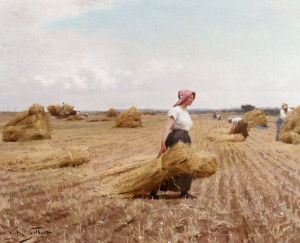 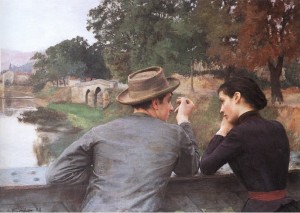 Out of this unsettled state, and wanting to tap into that burgeoning source of collectors, two very different responses arose… Naturalism and Impressionism. Today we hear little or nothing of Naturalism while Impressionism and plein air painting is the rage.

With the writers and critics coming down on the side of the Impressionists, the negativity directed toward the Naturalists was intense. As recorded in Gabriel Weisberg’s book, Beyond Impressionism, the Naturalist Impulse, the Naturalists were criticized as being out-of-step with new directions, regressive, obstacles to innovations, devoid of imagination, and lacking courage and initiative. However, the major criticism was that their work was too literal and “boring as a photograph”. Photography was criticized as being “the bane of creative imagination, killer of invention. 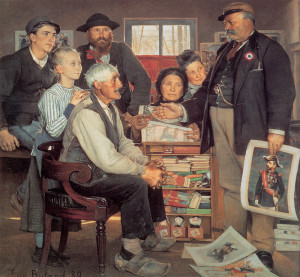 The Naturalists were only taking advantage of the technological advancements being made in photography. They may be considered the first photo realists. Using photos, combined with drawings, oil sketches, and finished oil studies of their subjects done from life, they were able to construct very detailed, highly refined, sometimes life-size paintings from this material…a new type of painting never before seen was the result.

These artists were academically trained. They possessed a mastery of drawing, human anatomy, and composition. Photography became a source of note taking and enabled them to achieve a level of detail and refinement that stunned the art world. The Impressionists on the other hand, (especially the “isms” that followed them) eschewed the academic training that produced some of the greatest works of art in human history. 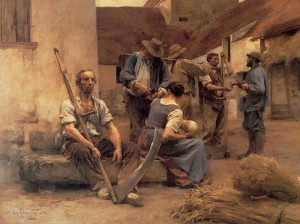 The Naturalist’s goal was to capture a “slice of life” through images that were linked to country or urban life. They selected themes of daily life often featuring working people, depicted in a non-sentimental way…warts and all. Because of their stated goals, landscape was only viewed as a stage for the depiction of the human figure. They sought to achieve “nature in landscape, character in portraiture, and humanity in genre painting”.

To achieve this phenomenal realism, many of the artists built outdoor glass studios (much like a greenhouse) in which they posed their models and produced detailed studies of them in a controlled rustic setting. The criticism of their work did not let up and eventually led to their demise. It was just too factual, too scientific…too photographic. As a result of all this criticism, some of the painters began to disguise their working methods, wanting to leave the impression that their work was in fact created without photographic aids. 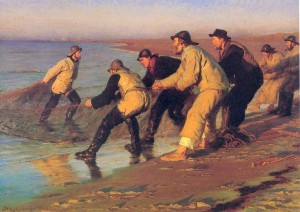 Well, the move toward more and more “modern” won out. Sound training eventually became a hindrance if one wanted to be free to express themselves. This led to almost a century of various “isms”, many of them of little worth.

Today, things are changing. Many ateliers are springing up that are returning to the academic training of the French Academies. Young students are hungry to learn the long established methods of the masters. Realism is finally on the upswing. The young generation coming up is already producing some incredible work.