There is a credible account of a Jewish woman, many many years ago, giving birth to a son which she wrapped in strips of cloth and laid in a manger. Her husband to be had tried to find them a room in a local inn, but there were none available, so a nearby stable was the next best thing.

Out in nearby fields shepherds were watching over their flocks, that were just starting to bed down for the night, when out of nowhere this incredible blinding light appeared, stunning and terrifying the men. The shepherds claim they heard a voice say, “Don’t be afraid. I bring you good news of great joy that will be for all the people. Today in the town of David a Savior has been born to you; he is Christ the Lord. To prove it, go on into Bethlehem and you’ll find a newborn boy wrapped in strips of cloth and laying in a manger.” How weird is that? Apparently, they did just that and found it exactly as they were told.

Old documents say this baby was God Himself…being in His very nature God. Being God and yet being made in human likeness, found in appearance as a man. To pull that one off required quite a stepdown for God, don’t you think? It’s kind of like being President of the United States and willingly trading places with the guy that keeps the bathrooms clean. Wow, I don’t know! That’s the stuff of mythology, but, the story has prevailed.

The baby grew into a man. It’s recorded that He did many mind-blowing things. Many looked to Him, believed Him, and trusted Him. Others hated Him and eventually killed Him. He claimed all this was going to happen. He also mentioned that He would come back to life in three days…all as a way to atone for man’s sin…and there’s plenty of that going around.

It all sounds pretty preposterous to me, even irrational and improbable…certainly illogical. But, you know what? I believe every word of it. There are lots of things in our limited humanity that we don’t understand; that doesn’t mean they never happened, are untrue, or impossible. 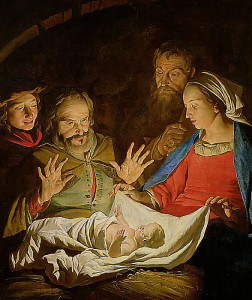 I’m just thankful God loved us enough to come, to serve, to teach, and to provide for our salvation and forgiveness from sin…something we all need. On top of that, when believing and trusting Him, we gain eternal life.

As irrational, improbable, and illogical as that sounds, it’s darn good news.

Have a blessed Christmas and New Year.