There are few places that appeal to me more as an artist than New England in the autumn…particularly Vermont. Well sure, there’s Holmes County, Ohio, small town America, and Europe as well…but there’s something special about New England. I’m sure much of the attraction is that it’s so different from Wylie, Texas. I’m really drawn to the rolling terrain, abundance of trees, appealing architecture, and beautiful vistas.

I came upon this surprise scene near Londonderry, Vermont; rounding a curve, there it was…a multi-story yellow house near the road’s edge in beautiful afternoon light, begging to be noticed. The appeal for me was not only the structure itself, but also its striking color amidst all the abundant foliage. 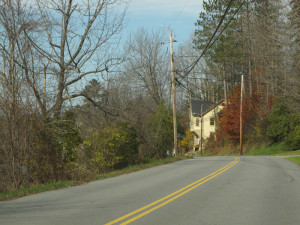 Back home in the studio, when scanning photographs on different occasions, there was always a pause when this photo appeared…a good indication of its intrinsic appeal. A decision was finally made to do a large vertical painting of the subject for the “Local Masters” show with John Cook, currently on view at Southwest Gallery in Dallas through June 2017.

I had been making copies of some of Camille Corot’s (1796-1875) work around that time and was very attracted to his selection of colors, which directly influenced the color choices for my piece. 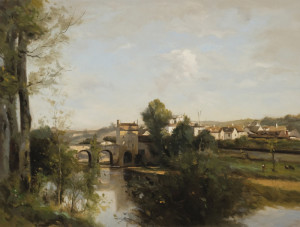 Once deciding to create this painting, a rough color study was done to establish the composition and color scheme. Based on the study, a 64” x 48” canvas was selected, which turned out to be the largest painting in the show. 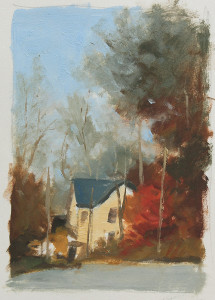 With the canvas selected, the scene was drawn on the canvas with a brush using Raw Umber; this was followed by a monochromatic block-in which established all the values (similar to the example below). 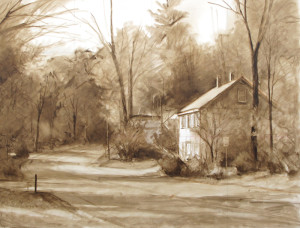 Following the block-in, color application began. The house was painted first, followed by some of the surrounding area. At that point I began to feel very uncomfortable with the painting…the house being very large and flat in value and color. I thought the color study worked fine but when enlarged to 64” x 48”, it was a whole new ball game. What to do became the all-consuming question, that’s when I decided to experiment with varying the direction of light. Not being sure how the shadows would fall, or how the temperature of light would change on the structure, I decided the best solution was to build a model. I used white foam-core board because it most clearly provided the information needed. 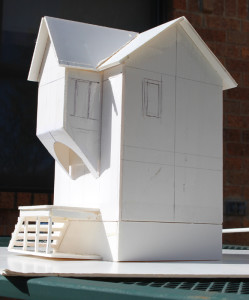 Studying the existing light of the reference, I decided to put the front of the house in shadow, which necessitated using some imagination when creating a shadow pattern on the side of the house. 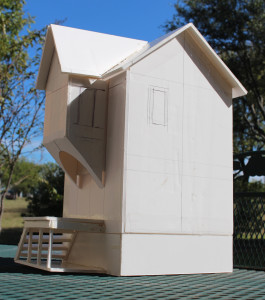 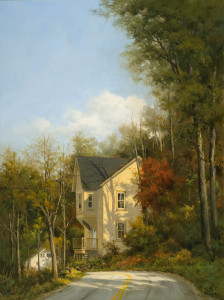 The painting required a number of these imaginary adjustments to be made. The final difficulty…it became necessary to sit on the floor in order to paint the lower sections because studio ceiling height prevented raising the painting to a comfortable position.

I find painting large canvases to be a significant challenge; this one was no different. I’m thankful for a good outcome.

I am very pleased to announce the release of my first instructional DVD, Limited Palette Landscapes, professionally produced by Liliedahl Art Videos. The video contains over 15 hours of instruction and follows my painting process from selection of the canvas to the final brush stoke. For a detailed description of the video contents, including a short video…and order instructions…please click HERE. Thank you in advance for adding this DVD to your video library. Upon viewing, if you would kindly share your comments with me, I would greatly appreciate it. THANK YOU.