Above is the view from the front gate of the house in which I was born…just a few years ago. I wonder from time-to-time what my life would be like today if I had grown up in this English coastal town of St. Ives, not far from Land’s End on the southern tip of England.

St. Ives is there, just north of Newlyn, on the opposite coast.

Would I still be an artist? How would my beliefs and attitude differ? What would I look like? Would my skin be ruddier and my eyebrows bushier? What would I sound like? Who would be my friends? Interesting to contemplate but of course, none of the questions can be answered. 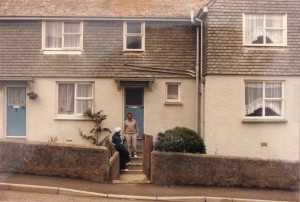 House in which I was born in St. Ives, Cornwall, England. Some obvious remodeling has occurred since then.

I was born at 38 Treverbyn Road, right there on the upper floor to the right. My mother was 13 when her parents and four siblings moved into this place. It was one of a large group of houses built by the St. Ives Town Council. Number 38 was one of three houses located in one of these buildings overlooking St. Ives Bay. Years later my father, stationed in England with the US Army, met my mom, they married in St. Ives…and the rest is history.

My mom recorded in her memoires her recollections of the house.

The kitchen was large and afforded ample space at our large dining table for all seven family members. The black Cornish range in the kitchen was heated with coal and was the only cooking unit in the house. It included a range surface top and oven. Above this was a range length grilled rack which was a suitable place for the homemade bread dough to rise. On ironing days the clothes were stacked there after ironing, to “air out” as Mother used to say, because without this extra airing our clothes felt damp due to the rainy climate in England.

The sitting room faced the back garden and was comfortably furnished and a rug covered the floor. There was a wall fireplace in which coal was burned; other than the coal fires there was no other source of heat in this modern house.

A few leaps up the steep staircase took us to the bedrooms. There was a bedroom for the boys, one for the girls and the room our parents shared. The bathroom upstairs consisted of a bathtub and a wash basin with hot and cold running water, heated in a downstairs tank called an emersion heater. The lavatory (flush toilet) was a separate, cement floored room at the right of the back door, which exited from the scullery. It had an iron tank up close to the ceiling which made a gluggedy-glue-glue-glue noise when you pulled the chain attached to it. The entire house was gas lit. We lit the mantles when darkness fell, and so the oil lamps, which had served us for so many years were stored away.

My first return visit to England was in 1970 to Leicester, while representing the US in the World Road Racing Championships of cycling. At the time I didn’t get to see much, didn’t get to meet any of my relatives, nor did I realize I would eventually become a fine artist. It was all about racing.

So, when I returned for the second time in 1990, well into my fine art career, it was about meeting all my aunts, uncles and cousins…and a lot about painting. I probably took close to a thousand photos and did several plein air paintings which are still sources of reference to this day. 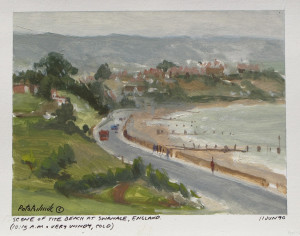 In 1990, I had just discovered that I could create my oil studies on paper. Prepared with an acrylic gesso ground, these 5.5″x 8.5″ sheets made transporting finished work easy. This is a view just down the road from my Uncle’s place in Swanage. 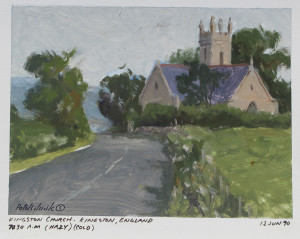 The roads were very narrow. We had our rented car parked as far to the left as possible…right up against the hedge…and yet still partially in the road. The car’s opening sunroof proved valuable for shooting photos. 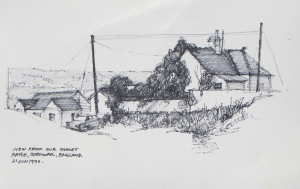 Besides seeing where I was born, one of my main goals was to go to Newlyn. I first heard of the Naturalist painters when Southwest Art magazine did an article about me in 1989. Later I learned that Newlyn was the hot spot in England for this movement.

Begun in France about the same time as Impressionism, it dominated the Paris Salons for a short time in the late 1800’s. A loyal group imported the principles to England, and Newlyn became the perfect spot to achieve their goals. 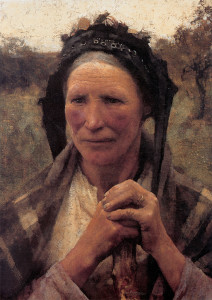 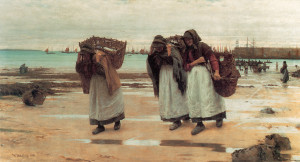 Sir George Clausen, Stanhope Alexander Forbes, Walter Langley and Frank Bramley became my immediate favorites, so in going to Newlyn I was not only hoping to see their work but also wanted to locate art instructors who were descendents of the teaching of these men.

I did locate the Newlyn Art Center/Orion Gallery and on the building’s façade was a plaque and portrait of Stanhope Forbes. He obviously had become the premier representative of the Naturalists in England. 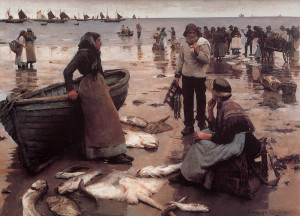 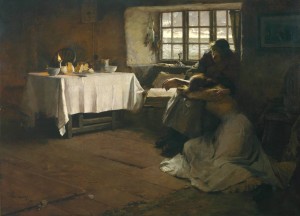 Inquiring inside and anticipating an opportunity of viewing great works of art, I was sorely disappointed to see not one piece. The walls were filled with abstract expressionism. I was told that the work of these men was a thing of the past, “We have moved on”. So, after purchasing several postcard reproductions of their work, I too moved on.

The painters came to Newlyn because of the rustic environment and a plethora of no nonsense, working class folk that made excellent models. Of all the art movements, the Naturalist and Barbizon traditions are my favorites. 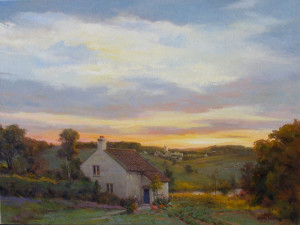 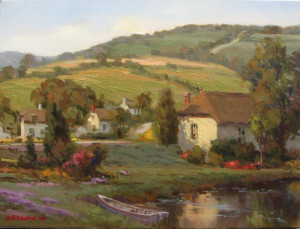 As things like this tend to go, artists come, popularize an area, tourists come, retail shops and go-kart tracks spring up, artists move. Now Newlyn is a favorite among tourists and the Naturalist painters that made it notorious are forgotten.

Now that’s my story and I’m sticking to it.

For more on the Naturalist movement and some of its great painters, please see my recent blogs HERE and HERE...and if you’d like to know what my absolute all-time favorite meal is, and it’s Cornish, please click HERE.

One of the favorite books in my library is Beyond Impressionism, The Naturalist Impulse by Dr. Gabriel P. Weisberg. You may purchase it HERE

Next week: An interview with the remarkable David Gray

(For details on each of these workshops, please click HERE)