“The word of God is living and active and sharper than any two-edged sword, and piercing as far as the division of soul and spirit, of both joints and marrow, and able to judge the thoughts and intentions of the heart. And there is no creature hidden from His sight, but all things are open and laid bare to the eyes of Him with whom we have to do.  (Hebrews 4:12-13) 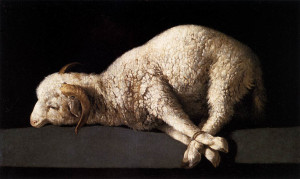 The Lamb of God

The Deity of Jesus Christ

The Word Made Flesh

And the Word became flesh, and dwelt among us, and we saw His glory, glory as of the only begotten from the Father, full of grace and truth. John (the baptizer) testified about Him and cried out, saying, “This was He of whom I said, ‘He who comes after me has a higher rank than I, for He existed before me.’” For of His fullness we have all received, and grace upon grace. For the Law was given through Moses; grace and truth were realized through Jesus Christ. No one has seen God at any time; the only begotten God who is in the bosom of the Father, He has explained Him.  (John 1:14-18)

Now when Jesus came into the district of Caesarea Philippi, He was asking His disciples, “Who do people say that the Son of Man is?” And they said, “Some say John the Baptist; and others, Elijah; but still others, Jeremiah, or one of the prophets.” He said to them, “But who do you say that I am?” Simon Peter answered, “You are the Christ, the Son of the living God.” And Jesus said to him, “Blessed are you, Simon Barjona, because flesh and blood did not reveal this to you, but My Father who is in heaven. “I also say to you that you are Peter, and upon this rock I will build My church; and the gates of Hades will not overpower it. “I will give you the keys of the kingdom of heaven; and whatever you bind on earth shall have been bound in heaven, and whatever you loose on earth shall have been loosed in heaven.”  (Matthew 16:13-19)

Jesus’ Proclamation of Himself