For most of the 1990’s I did a series of paintings (one per year) celebrating the United States becoming an independent nation, one nation…under God. The series was based on the song “America”, written in 1832 by Samuel F. Smith. I will present four of the paintings over a four week period. This is the second in that series. I think it’s time to once again reflect and refresh our minds with what’s really important. 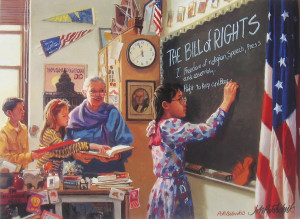 When this painting was created, my purpose was not only to do a beautiful painting and celebrate the wisdom of our Founding Fathers, but also to sound a warning that our freedoms are in jeopardy. Now, things have changed. The warning has become an alarm. Please consider the following comments I made back then concerning this painting.

Because many of the early colonists were concerned that the Constitution did not specifically assure them of certain rights, a Bill of Rights, generally recognized as the first ten amendments, was written to alleviate those concerns. It was ratified on November 3, 1791.

“Sweet Land of Liberty” gives thanks for our American heritage. The model of the Santa Maria recognizes what was then the 500th anniversary of the discovery of the Americas by Christopher Columbus. The banner of the Statue of Liberty proclaims that we are a melting pot of many different nationalities free to immigrate (legally) to these shores and plant roots in American soil. The White House banner remembers more than 200 years since its construction.

The clock, its time approaching twelve, is a warning that the freedoms we have enjoyed and taken for granted are in great jeopardy. The Bill of Rights, written by our Founding Fathers, has been repeatedly reinterpreted by the Supreme Court until it has lost the intent of the original writers.

Patrick Henry said, “This nation was founded on the Gospel of Jesus Christ.” Those establishing this country took for granted that America was to be a Christian nation founded upon Christian principles. Freedom of religion was the freedom from one denomination ruling the nation. It did not mean a nation free from religion. Nor did it mean, as interpreted in Engel vs. Vitale, 1962 that the Church and state must be separate. Prayer now is discouraged in the schools and in 1980 the Ten Commandments started disappearing from the walls of the classrooms.

The Founding Fathers knew what would make and keep America strong but we have sadly cast off our moorings. James Madison wrote, “We have staked the whole future of American civilization not upon the power of government, far from it. We have staked the future of all of our political institutions upon the capacity of each and all of us to govern ourselves according to the Ten Commandments of God.” Let us not forget. My Country, ‘Tis of Thee.

A high-quality print of “Sweet Land of Liberty” is available for purchase. Please contact the artist for details.