It was 43 years ago that I left California to begin a new life in Texas. I had just been discharged from the Air Force, had been married for only seven months, and was about to

see if I could make it as a freelance illustrator in Dallas. My wife was already there, so the non-stop drive from Los Angeles, in my little Datsun, didn’t seem like a big deal.

I remember arriving in California. It was June 1968. An exciting, wonderful adventure was about to unfold. I had just graduated from Wichita State University with a Bachelor of Fine Arts Degree. A few days earlier, gold bars had been attached to my ROTC uniform and I was to report for duty at SAMSO, the Space and Missile Systems Organization, in El Segundo.

I was fortunate to get this assignment. Information Officer was the title and the responsibilities covered public and internal information…and community relations. Being an athlete and a wanna-be illustrator, California was the place for me. All the armed services had their athletes training in California in preparation for the Olympic trials, and what I considered one of the best art schools in the country was in Pasadena. So going to California enabled me to fulfill my Air Force duties as Information Officier, attend Art Center College at night and compete with some of the best cyclists in the United States. It was all a dream come true. 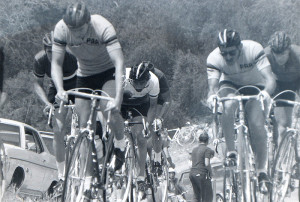 Attacking a hill in a Rose Bowl race with teammate Dave Christopher. I’m on the right, also in a PAA jersey.

Even though Air Force duties were structured, California represented freedom, sunny beaches, pretty girls, neat cars, carefree living, fun, and excitement. The Beach Boys seemed to express best the emotions I felt about the state. California was the place to be in the 60’s…and I had made it. When I arrived it was sunny, it was beautiful, and I saw palm trees lining the streets.

After many years, my wife and I were finally able to return a couple of years ago.  While making the drive down the coast on Highway 1 to our destination, many of the same emotions and memories of 40+ years ago swept over me. It was so good to be back. It was sunny, it was beautiful and palm trees still lined the streets. 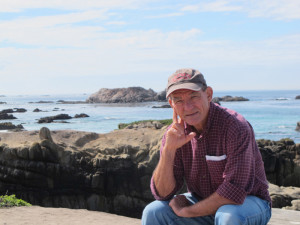 Rapidly fluctuating light, to paint or not to paint…that was the question. 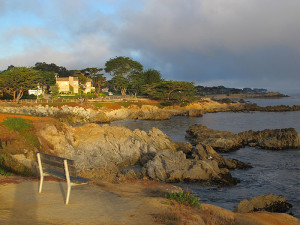 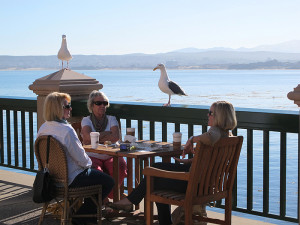 Just waiting for the smallest crumb to be dropped.

Now I was returning, not as an athlete, nor a wanna-be illustrator, but as a seasoned fine artist hoping to capture the “essence” of what makes California, California. Our destination was Monterey. 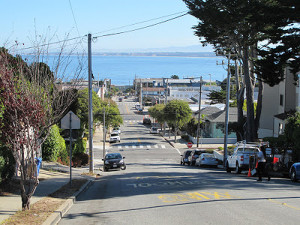 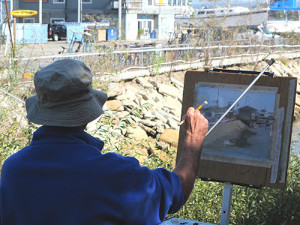 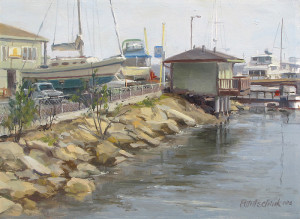 Our base remained the same for all nine days. That’s the way I like it. It takes time to really get the feeling of an area, and I’m not saying I did. Only time will tell as paintings are created from the trip. 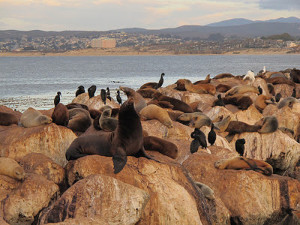 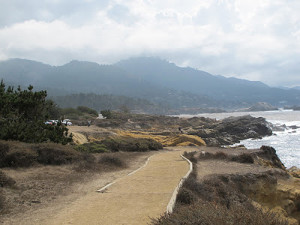 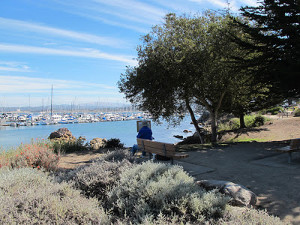 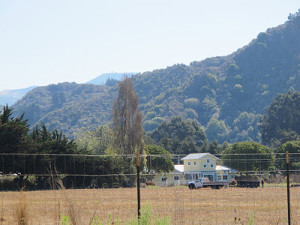 We took the famous 17-mile Monterey Peninsula drive which included, Pacific Grove, Carmel, and Pebble Beach… all awesomely beautiful. Another day was spent at the Point Lobos State Reserve, a magnificent area that at times can even be eerie in its wildness,  displaying a sense of other worldliness. We visited many Carmel art galleries. The place was packed with people the day we visited, and we had to park many blocks away from the town’s core. Beautiful work in many of the galleries, but far and away my favorite gallery was the Dawson Cole. co-owned and designed by internationally renowned sculptor, Richard MacDonald, the gallery is a testament to his exquisite taste and genius. 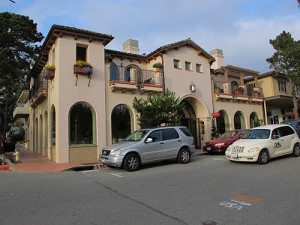 Other points of interest, and wonderful painting opportunities, were found in the Carmel Valley, the Fisherman’s Wharf area of Monterey…and in the variety of street scenes and architecture found throughout the peninsula. 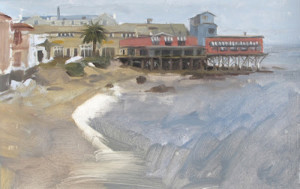 The painting in process. 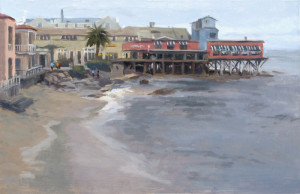 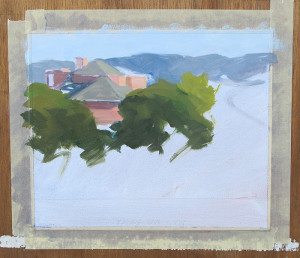 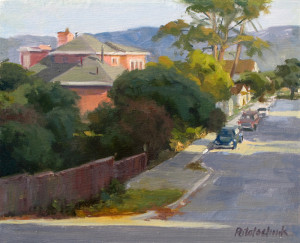 Since returning home, paintings of California have continued and will continue to be produced. Here’s the most recent one. Stay tuned to see what’s next. 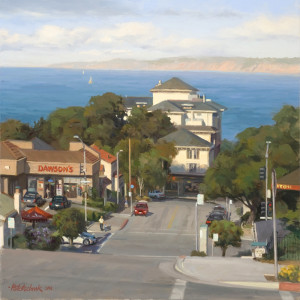