In the mid 1980’s, I had the privilege of meeting Rudy Colao while Newsletter Editor for Artists and Craftsmen Associated (ACA), an important Dallas based art organization founded by Bill Hummelbaugh and Ramon Froman in 1954. Rudy was a favorite of ACA, as we invited him to Dallas many times in order to teach and demonstrate his working methods. My wife and I had him to our home for dinner during one of his Dallas visits and enjoyed a memorable, fascinating, and entertaining evening of conversation. I remember him to be a humble, gentle and kind person. He will be missed. His wonderful paintings added beauty to this world.

He primarily painted from life and was most noted for his still life and floral paintings, however he was also very accomplished depicting landscapes and interior scenes. 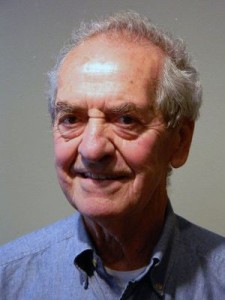 Below is his published obituary:

Rudy N. Colao, died suddenly on Saturday, October 4th while on his way home from one of his frequent walks to downtown Rockport. The news came as a shock because just a short while before he was to all appearance in good health and spirits and was planning to attend an event that evening at the Rockport Art Association. He was 86 years old.

Rudy was born in Peekskill, New York, the eldest of the four children of Rudolph Colao and Philomena (“Minnie”) DeMaria. He attended the local schools there and was drafted into the US Army at the end of WWII. After that he attended the Art Student’s League in New York City on the GI Bill. There he studied painting under his revered teacher Frank Vincent DuMond. Here he also formed many life-long friendships and met his future wife, Camila McRoberts. 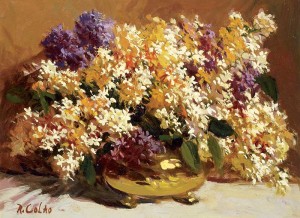 After art school and marriage they started a family and settled in Manhattan in a landmark building commissioned by a group of artists including Frank DuMond and Childe Hassam at the turn of the 20th century. Rudy worked as an artist, participating in the “Village Show” in downtown Manhattan in the early years, occasionally teaching classes and enjoying an active social life with friends from art school and their upper West side neighborhood. At this time he painted almost exclusively florals and still-lifes. 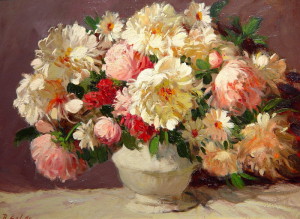 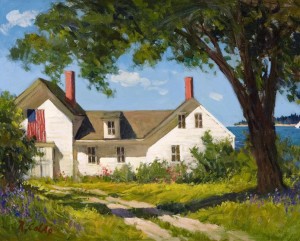 In 1971 he left New York with is family and moved to their summer home in Canaan, New Hampshire. He had a space in one of the barns on the property converted into a studio, which he successfully used as the subject of a series of paintings.

They divorced in 1976 and Rudy moved back to his old neighborhood in New York where he used the studio in his apartment as the subject of more paintings. During this time he reconnected with old friends, met new ones, travelled to Europe and came up to New Hampshire to visit and spend holidays with his family. At this time he had his paintings featured in galleries around the country, and occasionally held workshops in the Southwest. 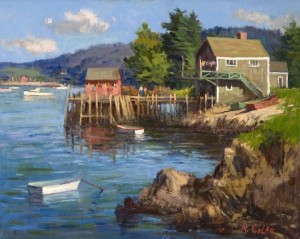 In the early 90s he moved to Rockport, MA, an art colony which he had first visited in the 1950s. He established himself there and became an integral part of the art scene. During his years in Rockport he painted landscapes and seaside scenery in addition to florals and still-lifes.

In 1999 he bought a dilapidated but historic house and had it renovated with the addition of a new studio section where he continued to work until the day he died. He went on several painting trips to Europe with local groups, frequently visited his family in New Hampshire and Vermont, and kept involved with the art scene in Rockport and Gloucester, exhibiting his work in regional galleries and winning prizes in area shows. 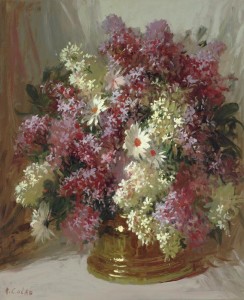 Rudy was very sociable and good natured, always willing to be helpful to others and had a lively sense of humor. He was full of vitality and enthusiastic about his interests in people, language, culture and art. He especially enjoyed listening to – and sometimes attending – the opera. Some of his favorite reading was Alan Abelson’s columns in Barrons and The New York Review of Books (co-founded by a former neighbor). Painting and his family were the centerpieces of his life. In the early 1980s he began to take a serious interest in Zen Buddhism which he maintained for the rest of his life. He is featured in a couple of magazine articles and in Who’s Who In American Art.

He was predeceased by a younger brother and sister as well as his former wife and good friend Cam and their daughter Meg. He is survived by a younger sister Renee, his daughter Marta and her husband Jeff Pentland and their three children, Lilian, Harry and Camila of Hartland, VT and his son Will of Cannan, NH.

There will be a private burial in Canaan. Contributions in his memory may be sent to the charity of your choice.