I just returned from three days of plein air painting in the Flint Hills of Kansas. I remember, as a young boy, passing through the area several times a year with my folks on the way to visit my grandparents in Pittsburg, Kansas.
The Flint Hills were first given the name in 1806 when explorer, Zebulon Pike, referred to the soil as being “flinty”. Early European settlers found plowing pretty much impossible because of a thick layer of underlying bedrock made up of flinty limestone. As a result, the region is sparsely developed and represents the last expanse of intact tallgrass prairie in the nation…and the best opportunity for the sustained preservation of this unique habitat once covering the great plains.
Millions of American Bison once grazed the area. Today one sees mainly cattle, but bison are also being reintroduced to the area.

Flint Hill Painters
Back row L>R: Kim Cassbeer, Cally Krallman, Judy Mackey, Debra Groesser
Front row L>R: Marc Hanson, John Pototschnik, Joseph Loganbill, Susan Lynn, Dick Sneary, Michael Albrechtsen, (Not shown: Phil Starke)
Painting in the Flint Hills is not easy. It’s not the kind of place in which you can just show up and discover incredible motifs over every rise and around every corner. Trees, structures, even vistas can be difficult to find. Horizontal is the word that comes to mind when in the Flint Hills…layer upon layer of rolling horizontal lines. I think all of us artists sought verticals and diagonals to add balance to our compositions.
Although this is the third time I’ve painted the region, getting to the essence is not an easy task.
Shown here are my attempts. 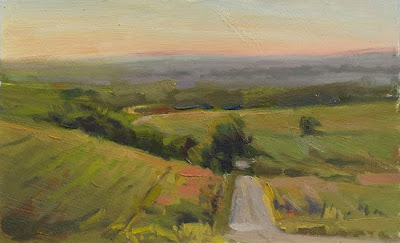 Kim Casebeer organized this paint out and she wisely knew we would all like to experience a Flint Hills sunset. So, late one afternoon our Flying W Ranch hosts had us all pile into a 1956 Ford grain truck and they drove us to a high point. All of us painted this amazing vista as the light rapidly changed. The challenge was sticking with the original motivation and not “chasing the light”, as artists often say. I was guilty of this amateur mistake as I continually warmed up the landscape in order to keep up with the descending sun. 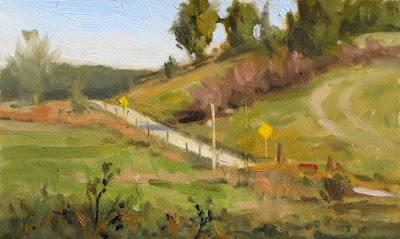 Mike Albrechtsen and I found this view. It was also one that Marc Hanson painted. Appealing textures, color variations, and rise and fall of the land were sufficient motivations for attempting this painting.

I enjoy painting farm scenes that include silos. While Marc and Michael painted a large pond just off to the right, I decided on this view.

Black and white ladies with large udders enjoyed dancing in the nearby pond but they gradually worked their way toward me. Ever so curious, nudging ever closer, they pressed in until I almost couldn’t move. They checked out everything. I felt my whole set up was in danger of going down. My loud warning to, “Go away”, fell on large, deaf ears. However, somehow I knew they must have approved of my work as they flipped their tails and nodded their heads. I hung in there and they eventually grew bored with my efforts to capture their home turf.

This is the view from the bunkhouse area of the Flying W Ranch. Painted early one morning, I was attracted by the long shadows and the winding road inviting one to see what’s around the corner. 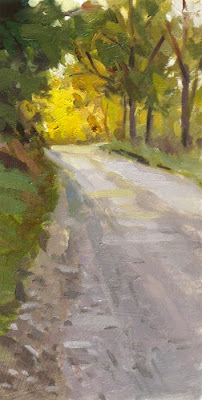 On our last evening together, many of us painted on Coyne Creek Road. I found this location extremely appealing and sought to create an unusual composition. I was painting while standing in deep shadow so was totally shocked when I saw the painting in natural light. It was way too light and did not capture the observed mood at all. Back in the studio, I darkened values in an attempt to get closer to reality. 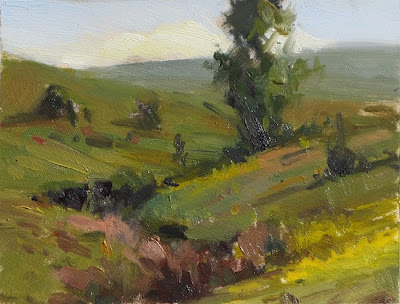 One of the difficulties of painting during midday is the flatness of the light. This painting gave me fits. I had to take significant artistic liberties just to get to this point. 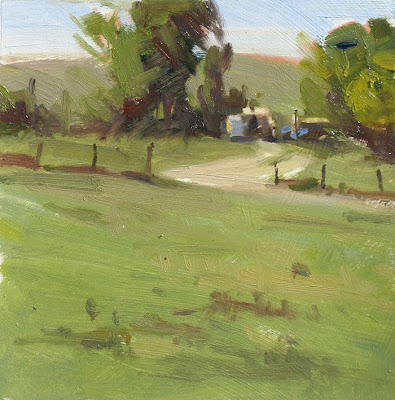 This was a very quick study done just prior to leaving on our sunset excursion. It’s a view from a distance of the bunkhouse area. I liked the simple composition.
Next week I hope to show the favorite paintings produced by each of the plein air participants.
If you would like to receive my monthly newsletter, please click HERE
Tweet
&description=Plein Air Painting in the Flint Hills" data-pin-do="buttonPin" data-pin-config="beside">