As I mentioned in last week’s blog, I had the distinct privilege of enjoying three days of plein air painting in the Flint Hills of Kansas with a great group of talented artists. You may read the account of my experience HERE.
The participating artists came from Minnesota, Arizona, Nebraska, Kansas, Missouri, and Texas.
As promised, I would like to share with you the work of these talented folks. I asked each of them to select that one painting, produced during our time together, for which they were most proud. Also they were asked to explain what inspired them to paint their chosen motif and what were the challenges they experienced.
I believe you’ll enjoy their responses. 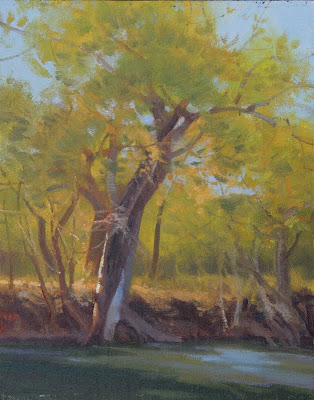 Reflecting Blues – 10″x 8″ – Oil
“I chose this spot because of the blue reflecting on the spot of the tree where the bark had fallen off. It was interesting to try and figure out where it was receiving such a blue cast since the water in front was green. I am sure that it received some reflected light from the water but even more accurate is that the only place it received color was from the sky to my back. It was hard to keep this as the one thing that interested me since I was tempted to paint the back light that came through the trees as the painting session went on.”
Michael was encouraged by his Mother and Grandmother to pursue art, rather than the family occupation of mechanical engineering. Graduating from Utah State University with a Master of Fine Arts degree, Albrechtsen was snatched up by Hallmark in Kansas City. He worked there for many years using his experience as a landscape and figure painter in the creation of speciality cards.
To view more of Albrechtsen’s work, please click HERE. Timber Hill – 9″x 12″ – Oil
“After painting here during our group sunset paint out, Cally and I decided to try it again but from a different angle. During the sunset paint out the back hills seemed to have more of a gray tone and we noticed that the next night they were more violet which is what I like to see. Interesting how the temperature can change from day to day. The biggest challenge this time of day is to capture the values and temperature you see in a short time frame and avoid chasing the light.”
Kim was born and raised on a Kansas farm. She received a BFA from Kansas State University and has worked as a graphic designer and art director. She spent her evenings and weekends developing her fine art. Now she is a Master Signature member of American Women Artists and a Signature member of the Oil Painters of America and the Pastel Society of America.
To view more of Casebeer’s work, please click HERE. 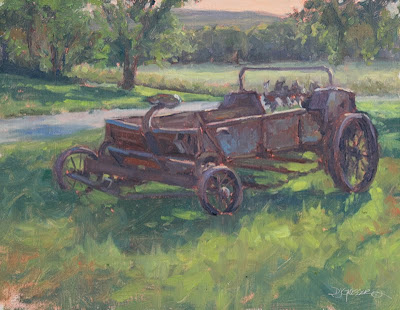 Back in the Old Days – 11″x 14″ – Oil
“I love painting old farm implements and old cars/trucks. More often than not, it’s not so much the subject matter that attracts me but the way the light and shadows play upon the subject and in the scene. That was the case with this old “wagon”. I was attracted to the rim lighting on the top edges of the wagon, the negative shapes of the wheels, and the glow of the light patterns on the grass beneath it. The light was beautiful in the background as well. My “challenge” on this piece was after it was finished actually…I found out that what I thought was some kind of wagon used to disc fields was actually an old manure spreader! I think I would have painted it anyway in spite of what it was. Just goes to show, through the eyes of an artist very ordinary things can be made beautiful.”
I didn’t realize it until now, but Debra and I were both born in England. After Deb completed college, she worked as a graphic designer. As a fine artist she has attained Signature membership in the American Impressionist Society, Plein Air Artists of Colorado and the American Plains Artists. She’s the mother of five children and has seven grandchildren.
To view more of Groesser’s work, please click HERE. 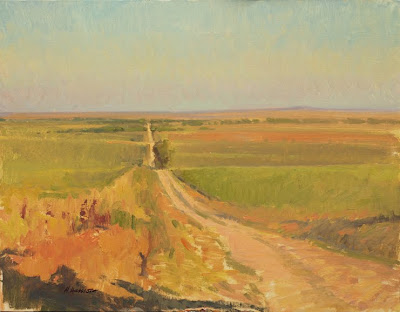 Road to Bazaar, KS – 14″x 18″ – Oil
“The most impressive visual idea that I was left with from our trip to the Flint Hills was that of the amazingly huge expanses of empty landscape, with rolling, grass covered ground occasionally broken by a few trees. It seemed like a land still lost in the throws of times past when bison and native peoples lived and survived on it. About the only clue that you’re not standing in a land lost in time are the ever present flint covered roads that bisect the land and connect remote regions to the little towns that sprinkle the area. The painting is of that idea. I had to paint it fast as the sun was setting behind me. Because of that I painted this quite thinly and almost as if I were sketching quickly with the brush, writing down the information as much as rendering the actual subject. By the time I had the surface covered, the sun had dropped below the horizon to my back and I was done.”
One of the reasons Marc is a visual artist is that it has always been more effective for him to share his excitement about the natural world through visual means, painting and drawing, than through writing or speaking of it. Hey, I think he did a great job of explaining his painting. He is a Signature member of the Oil Painters of American and earned the bronze medal for his work in the most recent national show.
To view more of Hanson’s work, please click HERE. 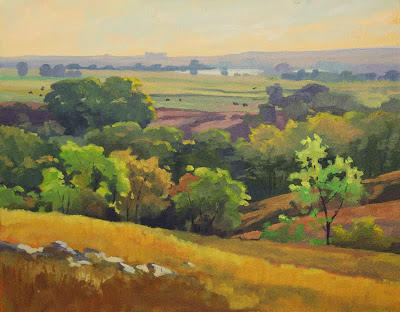 Subtle Changes – 11″x 14″ – Acrylic
“This was painted on Saturday morning. The most challenging thing was painting plein air in acrylic. I have to paint “swiftly” in order for the paint not to dry before I have a chance to blend it, unlike oils you can blend all days long. I was happy with my results! It is difficult to capture the vastness and depth of the area and truly represent the atmospheric perspective…always a challenge.”
Cally earned a BFA from Washburn University. She is also a very talented lyricist and songwriter. In just five years she has written over 200 songs. She has also produced four CD’s, her latest being “Some Kind of Magic”. You can check out her music here.
To view more of Krallman’s work, please click HERE. 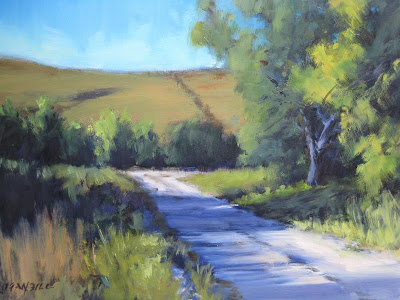 Morning on Silver Creek Road – 8″x 10″ – Oil
“We all have experienced the exciting feeling of being up early, hunting for a scene and not wanting to waste the early daylight. There were plenty of country road possibilities and the temptation to feel that around the next corner was going to be the best scene. I drove past this spot initially and then came back after getting a rear-view mirror glimpse. Here I found a combination of, interpolating light and cast shadow, taller trees in the mid-ground, and a view of the rolling pasture expanse that is iconic for the Flint Hills area. I thoroughly enjoyed the beautiful quiet morning – trying to capture the serene feeling of cool shade and emerging warm sun.”
Joseph majored in art at Bethel College and has served as Director of Carriage Factory Art Gallery in Newton, KS. He is now devoting his time to creating fine art. He believes art can serve many valid purposes. He feels when he paints that it is a healing experience as he is enveloped in that world of concentration, away from other concerns. 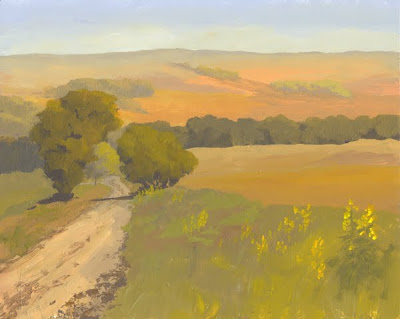 View from Sharpes Creek Road – 8″x 10″ – Acrylic
“What originally caught my eye was the pair of misshapen trees, and the way they formed a kind of gateway to the disappearing road. The longer I stood there looking at them, however, the more enthralled I was with all the beautiful and very subtle color changes happening in the hills beyond. I think I repainted that background about three times on the spot trying to capture those colors, so I’d have to say that was both the challenge and joy of painting this piece.”
Susan earned a BFA from Kansas State University. She is a Signature member of the Missouri Watercolor Society, and Painters of the American West and Midwestern Prairie. When painting she considers her compositions as interpretations of the landscape rather than strict depictions.
To view more of Lynn’s work, please click HERE.

Judith Mackey – Cottonwood Falls, KS
Judith is a native Kansan who resides in the Flint Hills. She probably knows this area better than any of us. She’s been a professional artist for more than 40 years. She is mostly self taught. In approaching her work, Judy first abstracts her subjects mass and form while on site. The piece is then refined in the studio by adjusting the composition and values, and selecting significant details. When painting the Flint Hills, Judith principally depends on her intimate knowledge of the area…the place she lives and loves.
To view Mackey’s work, please click HERE. 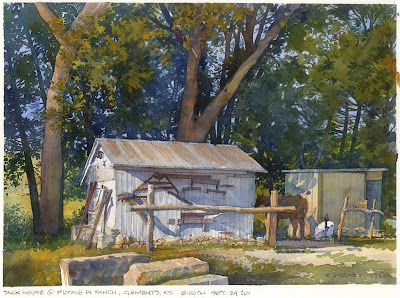 Tack House – 10″x 14″ – Watercolor
“These two buildings were just outside of the cabin (Calaboose) that my wife, Susan Lynn, and I stayed in. The one on the left is the tack house…the one on the right was our bathroom, without unfortunately any hot water. I like subjects with character (usually means something man made in them) and I thought these had lots…really reflected the Flying W Ranch. That along with the striking contrast of the two structures in the late afternoon sun against the dark background of trees caught my interest immediately. The challenge was pulling all the complexities together.”
Dick is a registered architect and has been an architectural illustrator for 30 years. His beautiful work has won many awards. He is President Emeritus of the American Society of Architectural Illustrators (ASAI).
To view more of Sneary’s work, please click HERE. 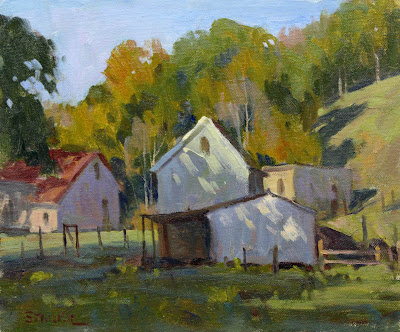 Farm Near Cottonwood Falls, KS – 10″x 12″ – Oil
“This was painted early in the morning. I was looking for anything but the rolling flatness of the Flint Hills, so I came upon this small farm and liked the variety of shapes in the barns and the dappled light. The hard part was the time aspect, trying to get an accurate drawing of the structures before the light changed and deciding what’s important and what’s not.”
Phil’s original plan was to enter the field of advertising as an artist but decided to switch to the fine arts. He studied at the American Academy of Art in Chicago.
To view more of Starke’s work, please click HERE.
If you would like to receive my monthly newsletter, please click HERE.
Tweet
&description=Plein Air Painting in the Flint Hills 2" data-pin-do="buttonPin" data-pin-config="beside">