Spent a wonderful day with my friend Gary Klingemann this week. We’ve been talking about getting together for about a year in order to paint. During that time we discovered we have many things in common, including similar spiritual and political beliefs. But, we also have a similar English heritage…military Dad’s meeting and marrying English women. I was born in England. Gary was born in Albuquerque, but at three months he was back in England because of his Dad’s reassignment. He spent the next 14 years in England except for a short stint in Spain. 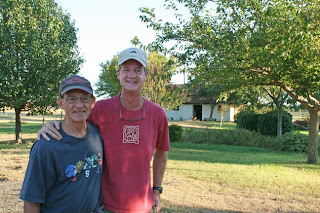 Mutt and Jeff
During those 14 years he became a very good soccer player, eventually playing at the semi-pro level in the United States. He earned two coaching licenses, one from England’s Football Association and the other from the United States Soccer Federation. He met his wife, Shelly, while coaching a soccer camp in the states. 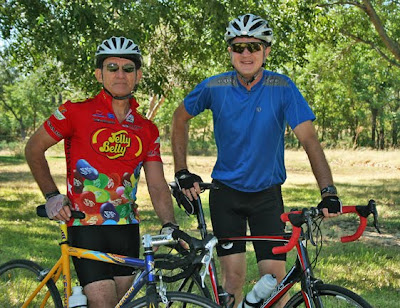 Just after returning from a 225 mile bike ride
(Well, OK…25 miles)
Another commonality we both share is a love for cycling. I raced for 12 years and was in the 1971 World Championships in Leicester, England.
Gary came to cycling out of necessity, during college, when he couldn’t afford a car. The salesman who sold him the bike offered him a job as bike mechanic and salesman. With several competitive cyclists working at the shop, he got involved with racing for a brief time. He also toured in England by bike and went to the Tour de France. Now he enjoys participating in century rides. 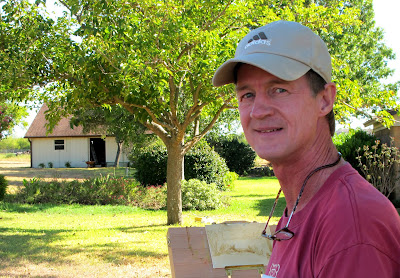 This is the scene we painted…
a view across my side yard to the barn.
Klingemann beginning his small oil study.
After our 225 mile bike ride, we set up to paint. Gary is now in a position to set more time aside from his busy life to once again take up painting. He currently is a graphic designer and owns his own business, Klingemann Design. It is a brand-focused design and communication studio specializing in branding/identity, print and website development.
Plein air painting, or as they say, “in the open air” is a real challenge. I guess you would say we enjoyed it… after we expelled a few moans and groans because of disappointing performance.
I’ve been doing more plein air painting than usual these last two weeks as a tune up for for two painting trips in the near future. The process got me to thinking about just what I take out into the field when I paint. Besides a Soltek easel, I carry a soft, Samsonite bag…12″x 14″x 13″. 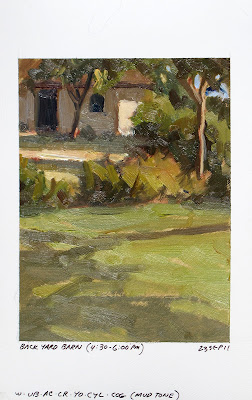 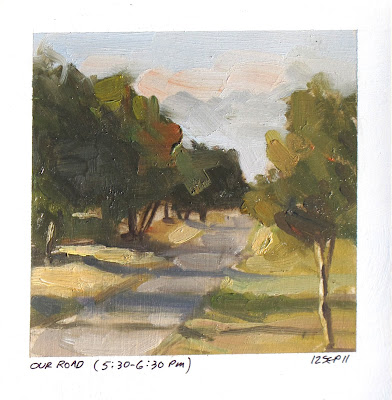 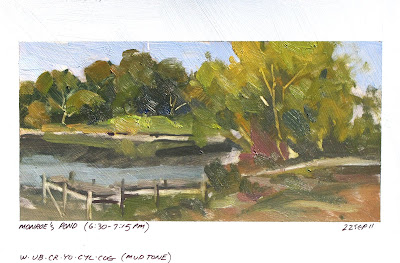