Questions and suspicions often arise when one’s work gets rejected from an art competition. It’s normal, particularly when you believe your work is worthy of recognition.

Thoughts of favoritism are a major suspicion. One might think the judge makes certain that his friends are accepted, and that they receive awards. It’s often the charge. The other concern is that work is judged by category and only so many pieces are accepted based on subject or painting style. Others assume that the judge only favors work that is similar to his.

I’m certain there are grounds for these suspicions, knowing human nature, but I have found no justification for such concerns when it comes to Oil Painters of America judging, despite my share of rejections.

OPA has done a really good job in making the whole judging process leading up to the final show as impartial as possible. I can only speak to the selection process, not to the judging for awards, which is handled differently, but based on how this judging was conducted, I feel pretty good about the award judging process also.

Those chosen for the selection committee this year were asked to look at 959 entries. All the images were available to be viewed online via Juried Art Services and we were given a Username and Password to gain access.

In Round One, we were simply asked to vote “yes” or “no” on each piece. In order to make fair judgments we first reviewed all 959 entries in order to gain a feel for the overall quality of the submissions. The paintings with the highest number of positive votes made it into Round Two, resulting in 343 paintings.

In Round Two, these 343 paintings were culled down to around 200, if I remember correctly. Judging in this round was much more difficult. As jurors we were asked to rate each painting on a 1-7 scale in the following categories: Design, drawing, values, color, center of interest, variety of edges, and paint application. Guidelines for the numbering system were as follows:

One represents a painting that is weak in all or almost all of the above areas.

Two – a painting that is weak in most areas.

Three – a painting that may be competent in a few areas, but overall, is weak

Four – displays knowledge of the fundamentals but overall is mediocre.

Five – competently handled in most areas.

Seven – outstanding and skillfully executed in virtually every area, top 1-3%

I found these guidelines most helpful in being able to establish the average and thereby remain consistent throughout the voting process. It was best to break the judging down into bite size pieces, otherwise it became overwhelming. Also, if you made the top 343, the art was already pretty good and therefore more difficult to distinguish subtle differences that would set one piece above another.

The ultimate goal was the selection of the very best, the top couple hundred pieces. I feel confident that the paintings that ultimately made it into this show are the best of the 959 works originally submitted, AND…the judging was totally fair and above board. Congratulations to OPA for their impartial selection process and for giving me the privilege of being involved.

…and congratulations to each artist that makes it into any of the very competitive OPA competitions.

So, in response to those that miss out on being accepted into OPA competitions year after year, there is the possibility I suppose that the stars are just never aligned properly for you when the competitions roll around, but…and you may not like this…it’s also possible that the work is just not good enough. What’s that mean for you and me? Get to work! 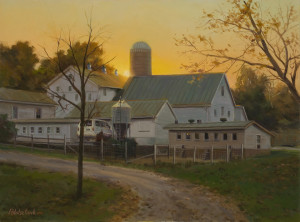 “Malabar Farm” – 18″ x 24″ – Oil…Each of the selection judges were permitted to vote for their own piece, but since one’s vote was only one-fifth of the total it was very possible that any one of us could miss the final cut. Thankfully, this piece was one of the 200 pieces selected for the 2018 OPA Salon Show to be held at the Crooked Tree Arts Center in Traverse City, Michigan.

His work may be found in the following fine galleries: