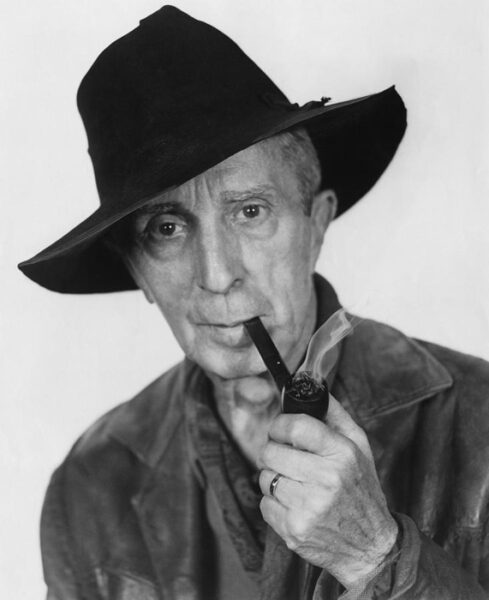 Arthur Guptill, author of Norman Rockwell Illustrator states: “Rockwell’s Common Man was earthily American. He raised no clenched fist and carried no banner demanding anything, and he didn’t incite anyone to riot. Instead, he infused his paintings with a deep affection for his country and its people…the Common Man. Rockwell’s Common Man “asked only for his rights as an American and silently pledged his faith in the promise of his country and in the system under which he lived and raised his family.” 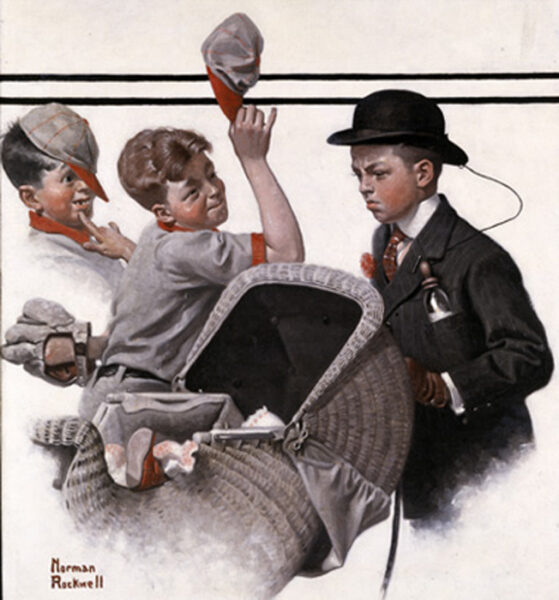 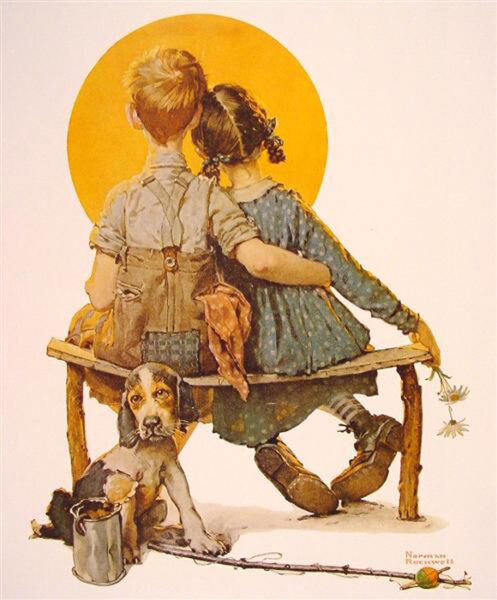 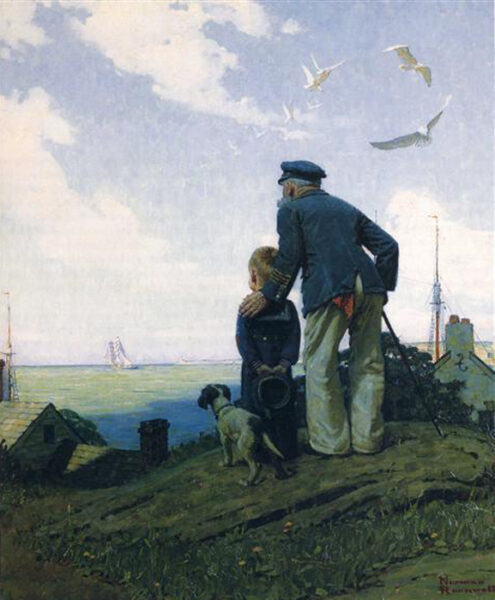 In Thomas Buechner and Tom Prideaux’s monumental work, Norman Rockwell, Artist and Illustrator, they state that Rockwell, “From his childhood, has recorded more Americana during his lifetime than any other artist. More than that, he has set down the whole story of America in its age of innocence. And he has done it so accurately and with so much warmth and understanding that he has achieved a popularity unprecedented perhaps anywhere at any time in history.”

Just what was it that so captivated the hearts of the American people for so many years?

Rockwell was an avid student of human nature and all its related emotions, foibles, insecurities, and deficiencies. In a deeply sensitive, respectful and humorous way, Rockwell was able to capture the America in which we would all like to live…the better side of us. His paintings didn’t condemn or ridicule but ennobled and prodded us to be kinder, more patient, understanding, respectful, honorable, loyal, fun loving, honest, hardworking, innocent, patriotic, God fearing, church going, family loving people. 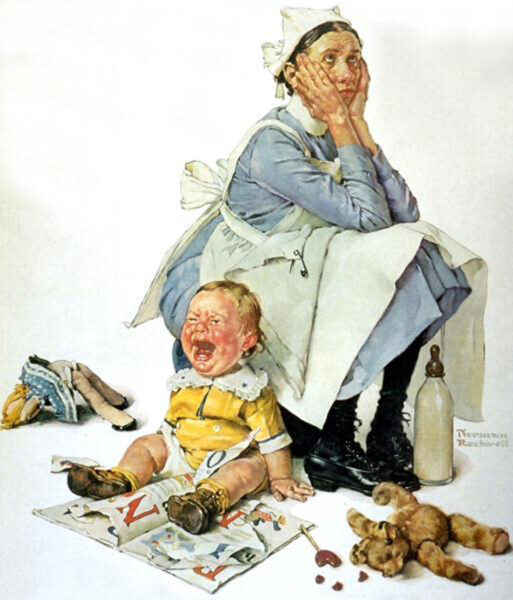 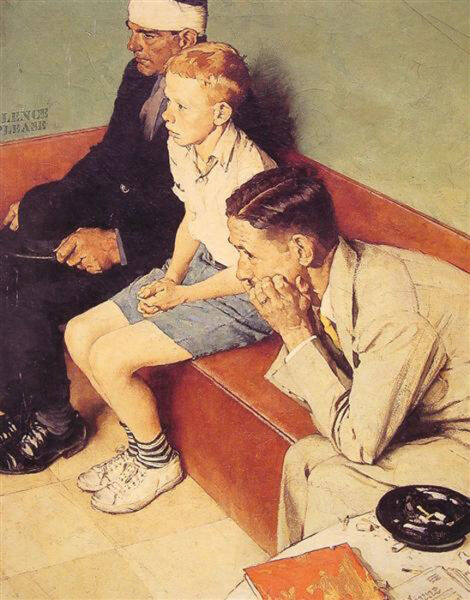 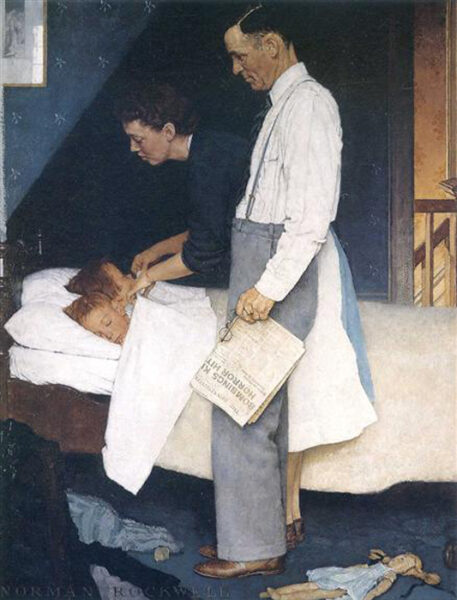 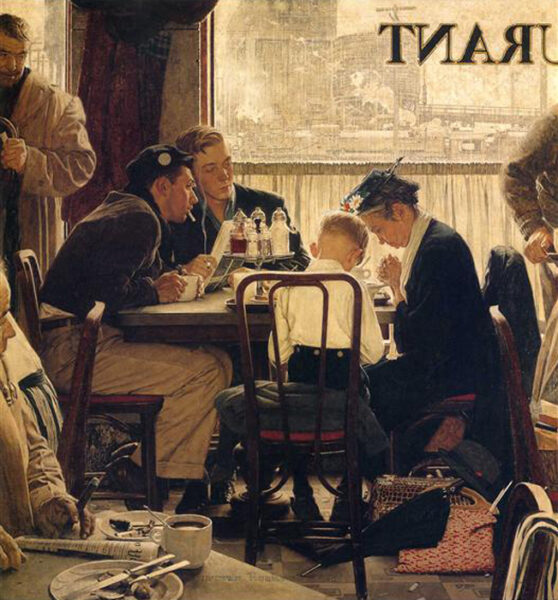 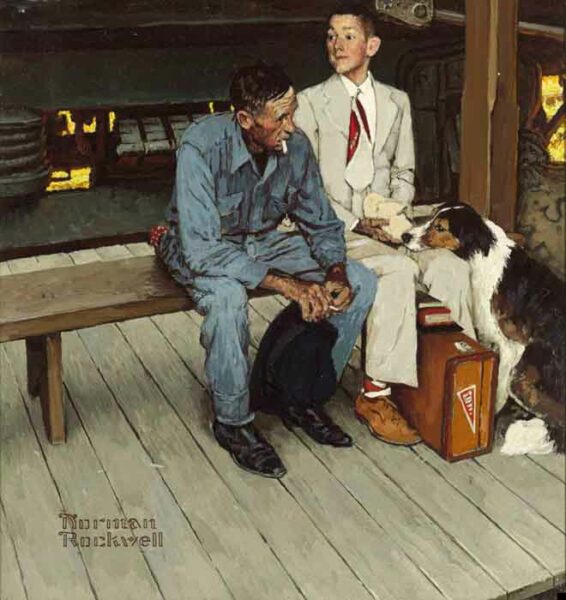 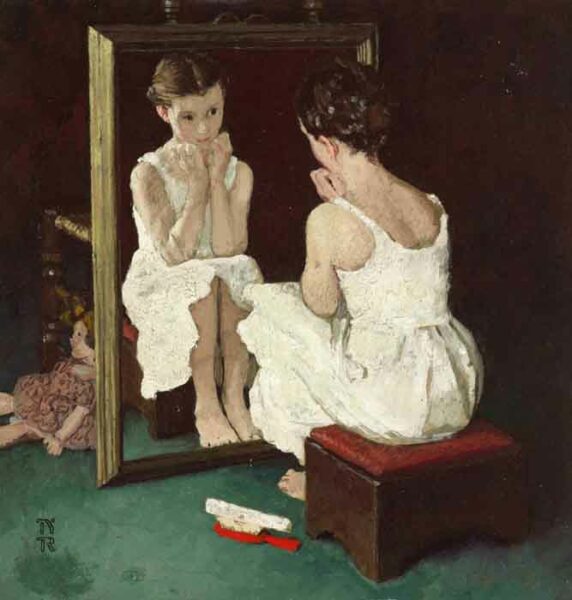 By the 1960s, the mood of the country was changing. By the end of the decade our country was almost unrecognizable from the America Rockwell so lovingly depicted. 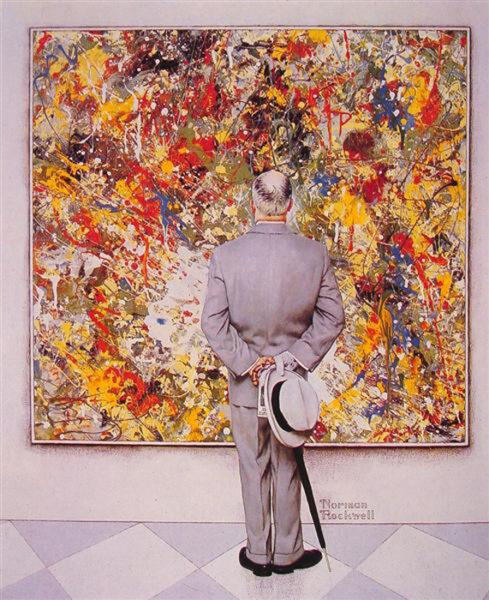 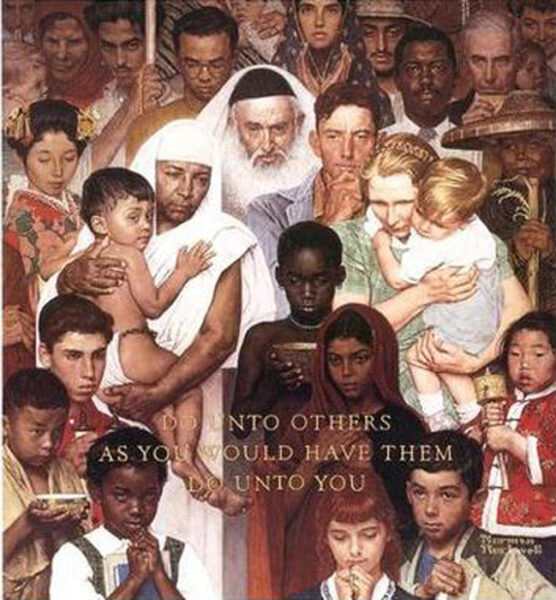 By the time I entered college in 1963, Rockwell’s reputation and work, among the fine art students was in the tank. He was scorned and ridiculed, considered trite, out-of-touch, dated and sentimental.

The revolutionary 60s hit America like an atomic bomb. Forces from within and without had every intention of destroying what we once held important…faith and family. Certainly, there were some deeply entrenched beliefs that needed to change. The 60s ignited just about everything.

I am of the firm belief that every problem in life has a spiritual root. Do we know, trust in, and submit to the God of creation or not? In the 60s there was a definitive swing to the “not”, and that opened the door for every perverted thing.

Rockwell surely felt the pressure to remain relevant. After 47 years with his beloved Post, the relationship ended. “The times changed, the Post didn’t,” he said. So, in 1963, Look magazine began publishing his work. It was a different magazine and a different Rockwell; Look didn’t want what Rockwell had done before, and to me, Rockwell became more of a reporter of the times, albeit a great one, but never-the-less, a reporter. Gone was the humor and a call to our better selves. Rockwell was forced to adapt to the changing times or become a discarded relic of the past.

In 10 short years, the country slid into the abyss. No, it didn’t happen overnight; a series of wars and deep seated racial strife stirred the boiling cauldron. It finally boiled over. 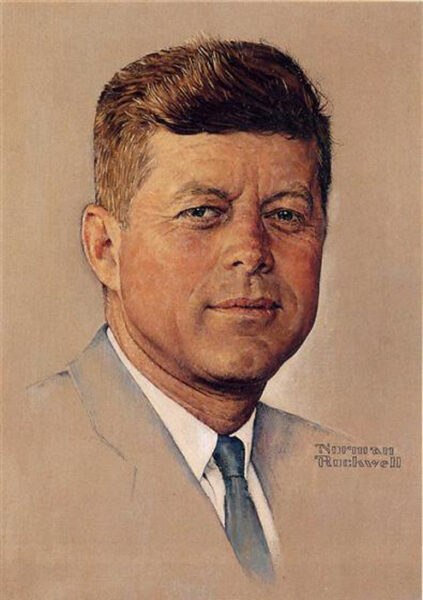 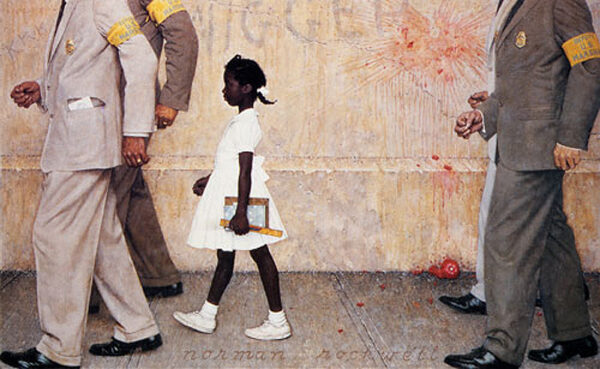 The Vietnam War was tearing the country apart. Racial tension was continually in the news. The Governor of Alabama, George Wallace, exclaimed “Segregation Forever.” President John Kennedy was assassinated, followed by his brother and then Martin Luther King. Timothy Leary encouraged the youth to take LSD, to “Turn on, Tune in and Drop out.” Foul mouthed, Alan Ginsberg polluted the minds of many college students as he traveled from campus to campus. Tired of the peaceful protest message of Martin Luther King, the violent protests of the Black Panthers and the Black Power Movement gained popularity. Adding to all the turmoil, Madalyn Murray O’Hair founded the American Atheists and a short time later demanded that mandatory prayer and Bible reading be removed from schools; the Supreme Court agreed. 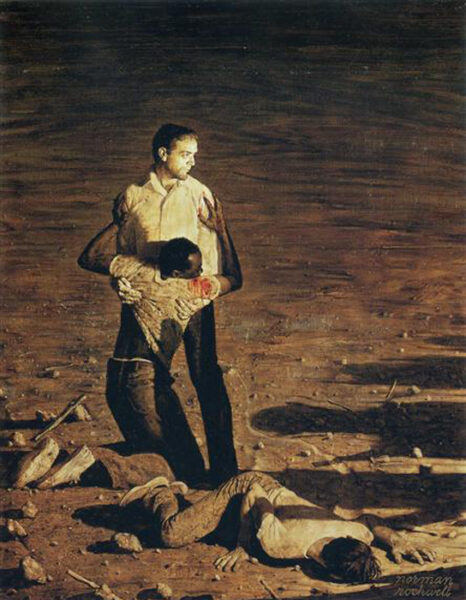 Rockwell survived but he had changed and his popularity was greatly diminished. “Instead of painting cheerleaders, he painted integration. Instead of peace and prosperity, he painted poverty, protest and the Peace Corps.” He suffered from depression and sought help from psychoanalyst, Erik Erikson, who helped him through the valley. He wasn’t mentally ill, but, “You don’t have to be desperately sick, on the point of death, before you call the doctor,” he said. 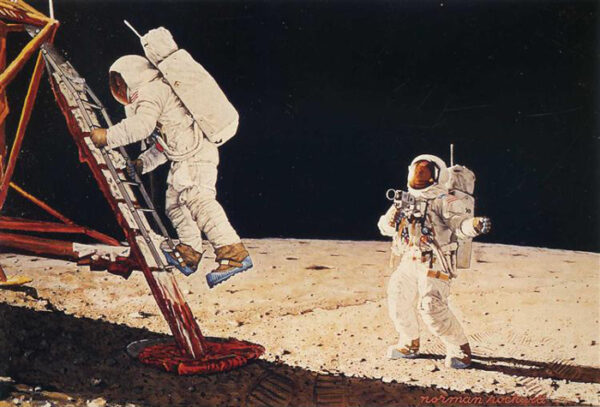 In 1973, Rockwell established a trust to preserve his artistic legacy by placing his works in the custodianship of the Old Corner House Stockbridge Historical Society, later to become Norman Rockwell Museum at Stockbridge, MA. The trust now forms the core of the Museum’s permanent collections. In 1976, in failing health, Rockwell became concerned about the future of his studio. He arranged to have his studio and its contents added to the trust. 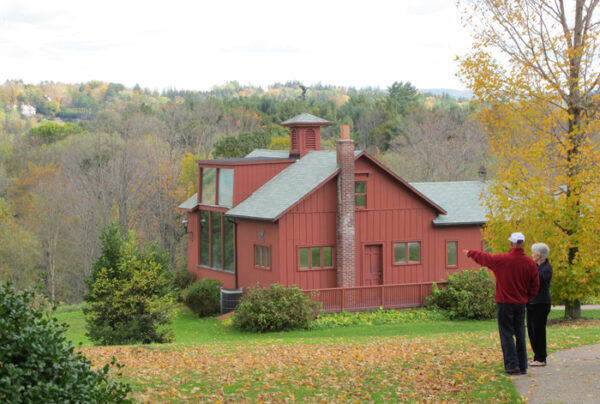 In 1977, Rockwell received the nation’s highest civilian honor, the Presidential Medal of Freedom. President Gerald Ford, upon awarding the medal said, “Norman Rockwell has portrayed the American scene with unrivaled freshness and clarity. Insight, optimism, and good humor are the hallmarks of his artistic style. His vivid and affectionate portraits of our country and ourselves have become a beloved part of the American tradition.”

Rockwell died peacefully at his home in Stockbridge on November 8, 1978, at the age of 84.

In 1987, President Ronald Reagan gave this moving tribute to the life and work of this great artist.

Next week, an interview with still life painter, Jeremy Goodding.