When I was in college pursuing a commercial art degree in advertising design, Norman Rockwell was not a name you would mention among the fine art students. His name was often spoken of with disgust and disdain. “He’s a sell out, just an illustrator, not a real painter,” they would say. His work was considered overly sweet, sentimental, and idealistic. He was not considered a real artist. 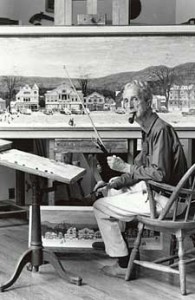 Rockwell in his studio with “Stockbridge Main Street at Christmas” on the easel. 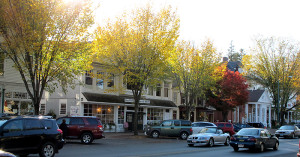 Part of Main Street in Stockbridge, MA . Every year at Christmas they recreate Main Street to look as it did when Rockwell created his famous painting.

Rockwell himself was the first to admit he was an illustrator and he wasn’t ashamed of it. “Some people have been kind enough to call me a fine artist. I’ve always called myself an illustrator. I’m not sure what the difference is. All I know is that whatever type of work I do I try to give it my very best. Art has been my life.” 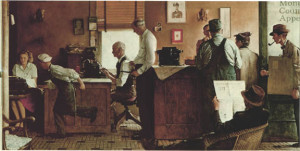 Rockwell created over 4000 works in his lifetime and was commissioned to illustrate over 40 books. Born in 1894, he had a long and extremely successful career as America’s favorite artist. I read somewhere that his work has been reproduced more than any other artist in history…by far. No other artist is even close. It’s possible no one will ever match his numbers. 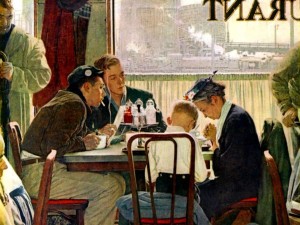 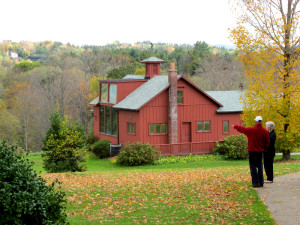 This is Rockwell’s studio at the time of his death in 1978. “The best studio I ever had,” he said. It was moved in two pieces from the village of Stockbridge to this location, on the grounds of the Rockwell Museum.

“I’m no better than my job, and I put everything I’ve got into it. I don’t want to paint for the few who can see a canvas in a museum, for I believe that in a democracy art belongs to the people. I want my pictures to be published.”

The early masters were Rockwell’s greatest source of inspiration. Rembrandt and Pieter Brueghel were his favorites. When I visited his studio, I carefully examined his collection of books…a wide assortment of Dutch, Spanish, French and Italian painters. Even some American’s were in there. His appreciation of art was vast. 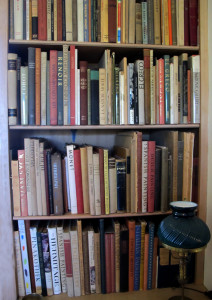 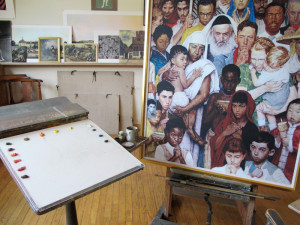 A portion of Rockwell’s studio. On the easel is…”Do unto others as you would have them do unto you” – 1961. 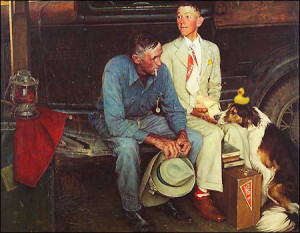 Rockwell was sort of a pictorial Mark Twain. He painted an America as he wished it to be…and as it was if you looked for it. It was an America of patriotism, respect of authority, wholesomeness, thankfulness, kindness, goodness, and childhood innocence.

In the 1960’s America was convulsing. Everything was changing. Modern art had taken root and the “intellectuals” did not care for Rockwell’s America. That was not the America they wanted and their teaching filtered into every college art department. I imagine Rockwell struggled with that. After a life of painting the positive side of America, his work changed. The world of desegregation, riots, demonstrations, politics and space exploration seemed out of character for a man who had always portrayed America’s best attributes. 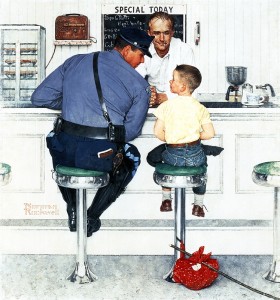 I first visited the Norman Rockwell Museum in 1993, just after it opened. Since then, the museum has become extremely popular. When I last visited, there was a constant stream of visitors anxious to view a magnificent collection of some 574 works. During tourist season, more than 1000 visitors per day stop in.
Well, what can I say? I stood among his work with a mixture of awe, amazement, and at the same time a deep sense of dejection as I was made brutally aware of my own inadequacies as an artist…and those know it all’s I encountered in school didn’t have a clue as to Rockwell’s greatness.
Standing before his work, one senses perfection…perfection in concept, composition, drawing, values and color. Reproductions of his work do not capture the sensitivity of the subtle changes in color temperature, brilliant color, texture, and brushwork. There are thickly and thinly painted passages. Sometimes he worked on very course canvas. He worked from photos during much of his career, but his masterful knowledge of anatomy took him way beyond the photograph. His concepts, the ideas expressed, are simply and convincingly presented with each and every supporting cast member and prop carefully chosen and precisely rendered.
He was an absolute master of contrasts…dark/light, broad/fine, sharp/soft, large/small, young/old, homely/pretty, fat/thin, strong/weak, delicate/course, on-and-on. 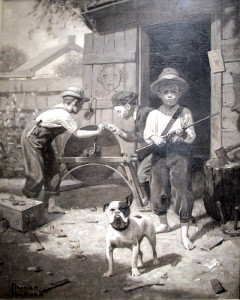 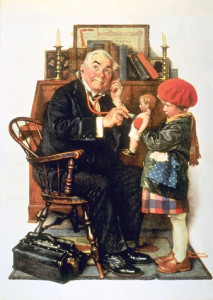 Filmmakers George Lucas and Steven Spielberg are major collectors of Rockwell’s work. They view Rockwell as a master storyteller, able to capture masterfully in a single frame stories about the adventures of growing up, and of individuals rising up to face personal challenges. According to these filmmakers, Rockwell created pictures with strategies similar to those they use. It is reported that Spielberg alone owns 50 original Rockwell paintings.

Since Rockwell is now in vogue with many art critics…they’ve finally seen the light…prices for original paintings have skyrocketed. The museum would like to own many more originals but with prices now consistently in the millions of dollars, it limits their acquisitions. In 2008, Verizon donated the two-million dollar “The Lineman” to the museum. It’s possible that such iconic images as “The Runaway” could fetch more than 15 million in today’s market. 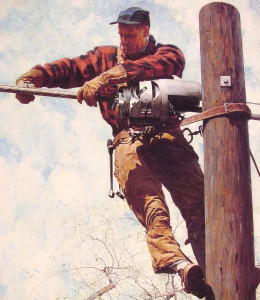 Norman Rockwell was a work-a-holic…seven days a week, plus holidays. The time spent certainly shows in the work. I would strongly recommend that you go out of your way to visit the museum in Stockbridge, Massachusetts. You will not be disappointed. 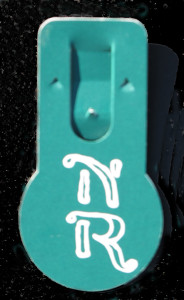