I first heard the term “Naturalism” in 1987 when Southwest Art did an article about my work. There was an association made between my work and what was called naturalism. I really liked the term and thought it affectively defined my work. I continue to use the term when defining my painting. My explanation has always gone something like this:

To achieve this affect, I use color studies done on location, photography and imagination. My most creative work incorporates all three resulting in a painting quite different from all the reference material. 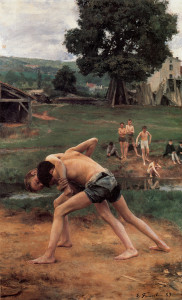 I have since come to realize that what I do is not really “Naturalism”. In reality the movement has its similarities to what I do, but it also has notable differences, one of them being a degree of finish that I have yet to attain. But, hey, I still like the designation. I’ll just use it with a small ‘n’ as in naturalism. 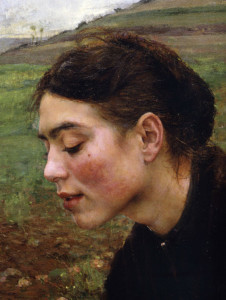 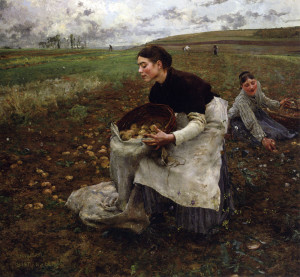 One of my absolute favorite art books is called, “Beyond Impressionism, The Naturalist Impulse”, by Gabriel Weisberg. In fact, I liked the book so much I later went back and purchased a second one, just in case the first one wore out.

Naturalism was short-lived. Beginning in the late 1870′s, it was pretty much over twenty years later. It began in France, “Duh”, and rapidly spread throughout Europe.

Jules Bastien-Lepage (1848-1884) was the undisputed leader of the new movement. When Lepage died at the early age of only 36, his dear friend, Pascal-Adolphe-Jean Dagnan-Bouveret (1852-1929), carried on the tradition. 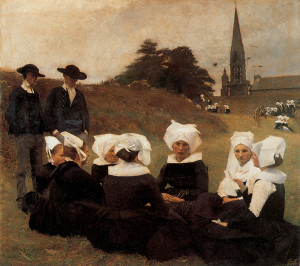 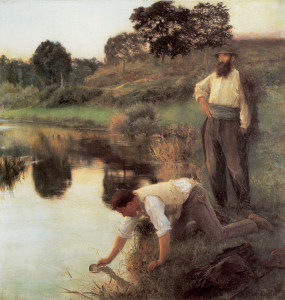 Due to a rising middle class in France, writers and critics were calling for a less idealized view of life…a modern, more scientific, factual reality. The Impressionists responded one way while another group of young academically trained artists responded in their way. This group became known as the Naturalists…setting the stage for conflict.

Next time: The Naturalists: Their techniques and their eventual demise.