For most of the 1990’s I did a series of paintings (one per year) celebrating the United States becoming an independent nation,one nation…under God. The series was based on the song “America”, written in 1832 by Samuel F. Smith. I will present four of the paintings over a four week period. I think it’s time to once again reflect and refresh our minds with what’s really important. 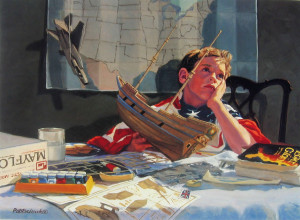 The painting above, “My Country, ‘Tis of Thee”, recalls probably the greatest truth of all, that America was founded, established, and is maintained by the hand of Almighty God.

The young boy, in the painting, is wrapped in an American flag declaring in a powerful way that America is indeed his country. With his mind filled with the adventures and hardships experienced by the founding fathers, he pauses from his model building for a moment to give thanks and to reflect on those experiences as expressed in the book, “The Light and the Glory” by Peter Marshall and David Manuel.

The replica of the Mayflower being built by the young boy is a clear and present reminder of the separatists who bought passage on the merchant ship headed to the New World. They sought religious asylum after separating themselves from the corrupted Church of England.

From Christopher (Christ-bearer) Columbus, who was convinced that God had given him a special mission to take the light of Christ into the darkness of undiscovered heathen lands; to the separatists; to the signers of the Declaration of Independence on July 4,1776; to George Washington, who led us in our fight for independence – most realized that it was God’s hand that protected us and raised us up as a nation.

As the modern aircraft, in the painting, hanging from a string with canopy, wing, landing gear and nose cone missing indicates – our hope as a nation is not in our technology, science or military hardware but in God alone. My country, truly is of Thee.

A high-quality print of this painting is available for purchase. Please contact me for details.