A few years ago, based on the recommendation of one of my collectors, my wife and I visited Holmes County, Ohio…still one of my favorite painting locations.

Very near Holmes County is Richland County, kind of in the north-central part of Ohio. Richland County was given that name because of its fertile soil. It is where Louis Bromfield, a Pulitzer Prize-winning author, was raised. Leaving the state for some years, Bromfield returned with his family in 1939 and purchased the Herring farm, adding two additional farms in succeeding years. Ultimately, what became the Malabar farm encompassed 1000 acres. (I haven’t been able to discover why it was named Malabar).

The Herring house in which the Bromfield family lived was only the starting point, as it was continually being expanded in sections over several years.

Bromfield had become a student and strong proponent of sustainable agriculture and the Malabar farm soon became a national model. The farm attracted film stars (Humphrey Bogart and Lauren Bacall were married there), artists, politicians, writers, and conservationists…typically attracting 20,000 visitors per year.

You will enjoy this old newsreel about Bromfield and the farm…common sense lessons, now rejected by many massive farms of today, resulting in America’s poor health.

I didn’t know any of this when we visited the farm, I was simply attracted to the land and its buildings. No on-location drawings or paintings were done, but I did take a significant number of photographs…and those photos purcolated for a few years before this painting was created.

The video presents a brief history of the farm. Pretty interesting.  (Click images to enlarge) 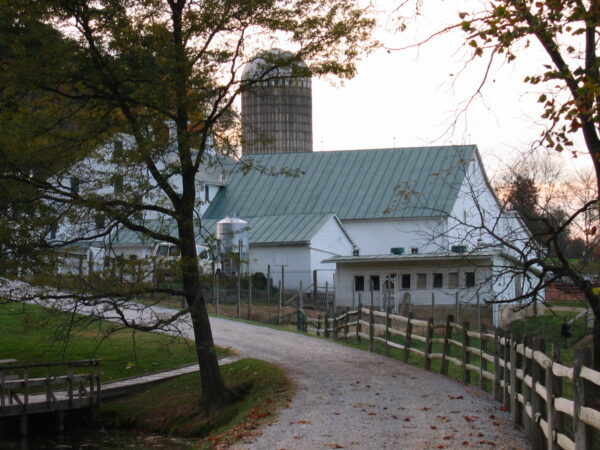 This was the reference photo used. I liked the composition of the buildings, road leading into the scene…and the lighting gave me the idea for something a little more dramatic. 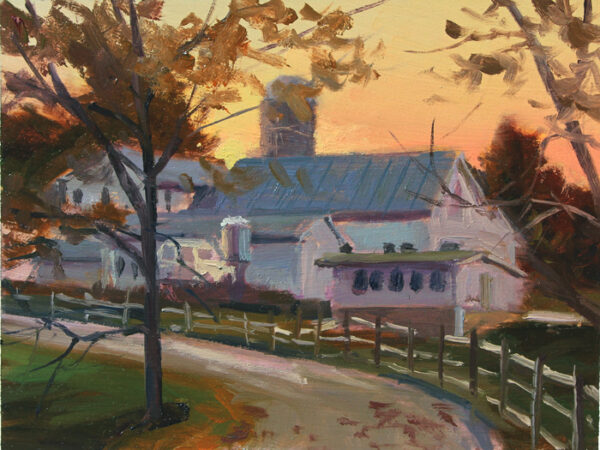 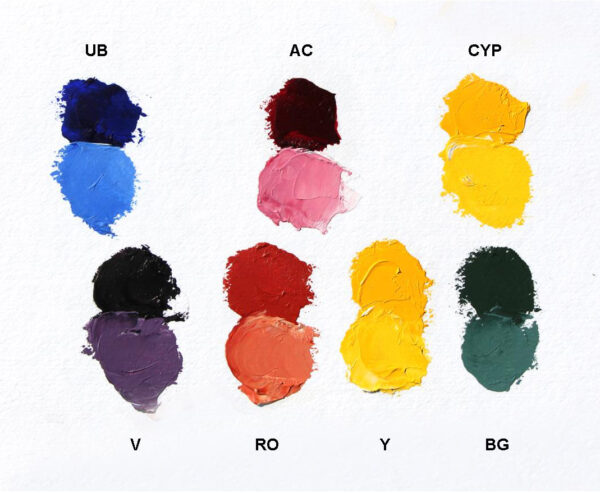 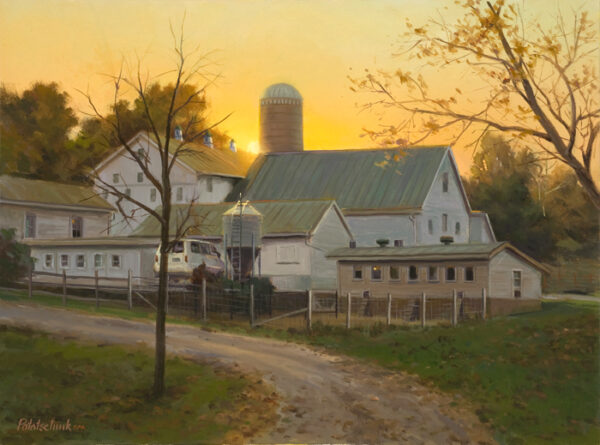 As you can see in the completed painting, I really limited the size and importance of the tree on the left from what is indicated in the small study. My thinking at the time was to show more of the colorful sky, but particularly the effect of the sun on the structure as it descended behind the barns. It may or may not have been a good decision; either way would probably have been fine, but I kind of like the openness of the final version. The painting was a challenge to pull off, but like all paintings, one needs to begin with an idea of what is to be communicated. Following through with appropriate color, value, and temperature choices then becomes critical if the idea is to be successfully executed.