For most of the 1990’s I did a series of paintings (one per year) celebrating the United States becoming an independent nation, one nation…under God. The series was based on the song “America”, written in 1832 by Samuel F. Smith. I have presented four of the paintings over a four week period. This is the final posting of that series. I think it’s time to once again reflect and refresh our minds with what’s really important. 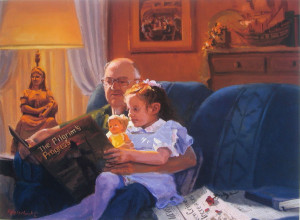 Our country is in turmoil right now. We have lost our way but I’m convinced there is hope for us if we return to the God of the Bible.

Let me share with you the motivation behind this painting.

Little do we know, much of the time, what a significant impact our seemingly mundane words and actions have upon people, even nations. The Pilgrims were such a people. Little did they know that their decision to resist the state church of England under King James I in the early 1600’s, by boldly standing for what they believed, would rock the kingdom of darkness and lay the foundation for a new nation and system of government in the new world.

As a small group of people living in the village of Scrooby, north of Nottinghamshire in England, they believed in: a) freedom of individual conscience; b) freedom of worship; c) the right to communicate with God directly; d) simplicity of religious life; e) purity of doctrine and practice; and f) strict adherence to Biblical principles.

As a result of these beliefs they separated themselves from the established state church, its rituals, doctrine and bishops. Therefore they became known as Separatists, Brownists (after Rev. Robert Browne, a prominent separatist in the 1580’s), Puritans and nonconformists, among other things.

Even though it was King James who acceded to the Puritans request for a new translation of the Bible, known today as the King James Bible, the Puritans were still not tolerated.

King James, believing he ruled by “divine right,” proclaimed “I will have one doctrine and one discipline, one religion in substance and ceremony…I shall make them conform themselves, or I will harry them out of the land or else do worse. If any would not be quiet, and show his obedience, he were worthy to be hanged.”

The virtually unheard of Forefathers Monument in Plymouth, MA., commemorates the landing of the Pilgrims in the new world almost 400 years ago on December 22, 1620. It also honors what they believed. One of the figures surrounding the monument is entitled “Education,” and suggests that the Pilgrims came to the new world for their posterity – for their children and their children’s children.

The figure “Education,” represented here by the lamp stand, shows a youthful person pointing to truth in a book of knowledge, showing that the fear of the Lord is the beginning of knowledge. On her head is a laurel wreath representing education as a crowning victory for youth who are able to use wisdom as they learn from others with more experience.

The grandfather with his granddaughter symbolizes the wisdom of old age and the energy of youth. He is reading to her from the famous “Pilgrim’s Progress” by John Bunyan, teaching her of the things of life as illustrated in the incredible story of Pilgrim.

The Bible on the sofa, our guide for victorious living, is a tribute to King James who authorized the first English translation of the Holy Scriptures.

The wilted flower expresses the sorrow felt over the decline of our society and of public education as God has been removed from our homes and schools. On the chest-of-drawers is a model of the “Mayflower” which carried the 102 pilgrims to America and on the wall is N.C.Wyeth’s painting “The Mayflower Compact,” a document many believe to be the very foundation of our United States Constitution.

A high quality print of “Land of the Pilgrim’s Pride” is available for purchase. Please contact me for details.