From the beginning of the year I had two paintings in mind that I wanted to create specifically for the Oil Painters of America Western Regional competition being held this month at Southwest Gallery in Dallas. Preliminary color studies were created in order to work out each of the ideas. Once the studies were finalized, excited was I to get to work on the larger pieces. Substrates were selected and work began on each of the pieces. Each began with a full monochromatic block-in using Raw Umber. When dry, color was applied matching the values established in the block-in. Paintings progressed rapidly until each of the canvases slowly and magically were transformed from brown to full color…and then…nothing. Life got in the way, other responsibilities beckoned, and the paintings set for months as interest waned. I was just unable and unenthused to move forward. Friends asked when I was going to finish them. “I don’t know,” I said, “I know I’ve got to get on them, the deadline for OPA is coming up.” Still more time passed before putting each, one at a time, on the easel and pushing forward. Everything was a struggle and I began to have serious doubts whether I’d have either of them done in time for the submission deadline.

Contributing to all this were some serious health issues that drained me emotionally and physically, so everyday in the studio was a struggle. It just confirmed something I already knew well but failed to observe…procrastination is not always a good thing; it can come with a price at times. “Seize the day” is a worthy exhortation.

Thankfully I prevailed and met the deadline, but was filled with doubt whether either painting would make the show. I was happy with the results but was so drained from seeing them set around for so long, that there were just all sorts of reasons for doubt and uncertainty.

This show in particular was important because it was being held in Dallas, near where I live, and was being hosted by a gallery that represents me. Finally notification came. Allowed to have just one painting in the show, it was great news to learn one was accepted.

Below, are my two submissions. I reveal the process behind the accepted painting. (Click images to enlarge) 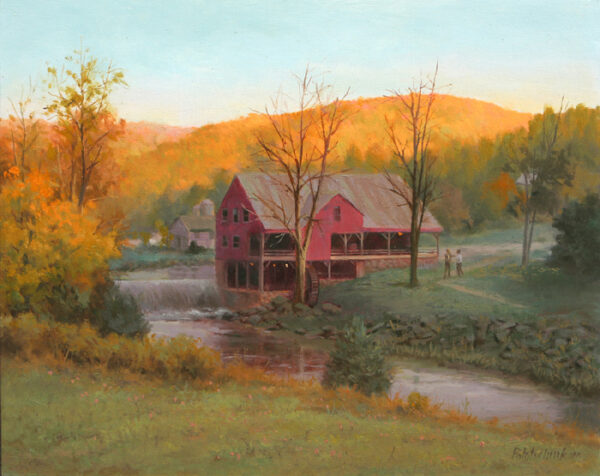 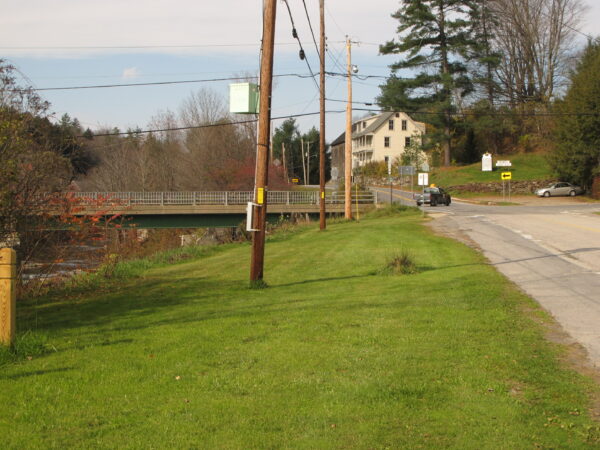 This scene from Vermont was my photo reference. Why, some might ask?…all those telephone poles, really? Yes, the painting would probably have worked without them, but I loved the strong verticals they created and how the wires and poles made such an interesting division of the space. 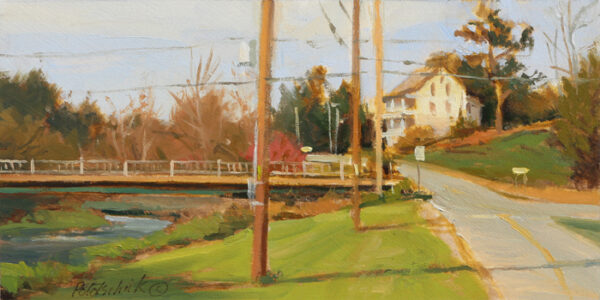 “Junctions” (Study) – 3.75″ x 7.5″ – Oil (Small color studies are where all the important parts of a painting are worked out prior to enlargement: Composition, Drawing, Values, and Color. As you’ll see later, as I proceeded through the larger work the river and shoreline were redesigned). 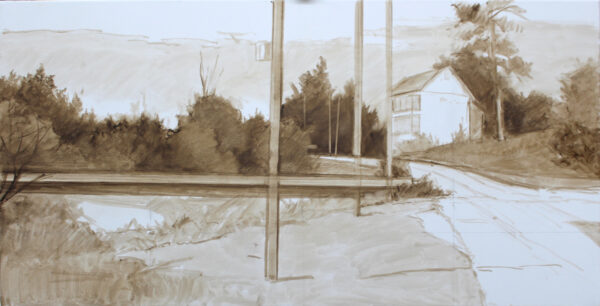 I failed to take photos of the initial drawing phase, but everything was first drawn with vine charcoal. When pleased with the drawing, I went over all the lines using a brush and diluted raw umber. I used a straight edge for all the verticals and a slightly curved mahl stick for the bridge. Then, a block-in of values began. 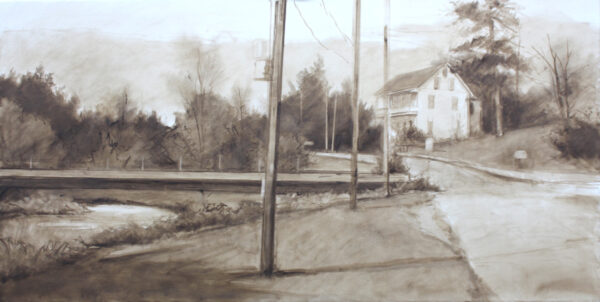 This is the completed monochromatic block-in, using only raw umber and mineral spirits…no white. 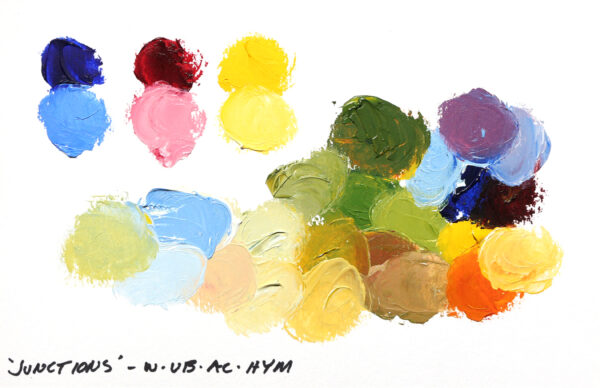 Using a limited palette of just three primaries for as long as I have, I pretty much know what primaries will yield the colors needed…but I still run a test. The palette here is: Ultramarine Blue, Alizarin Crimson, Hansa Yellow Medium, and Titanium White. 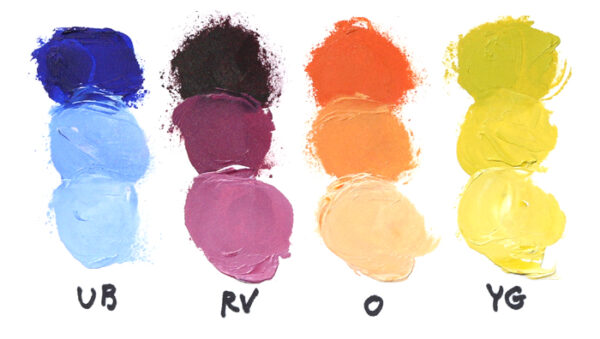 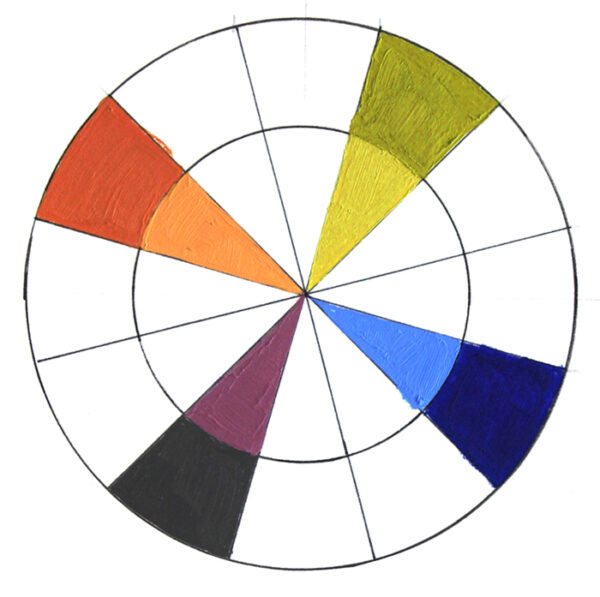 Here’s how the palette selected for this painting looks on the color wheel. It’s easy to see that it forms a square. 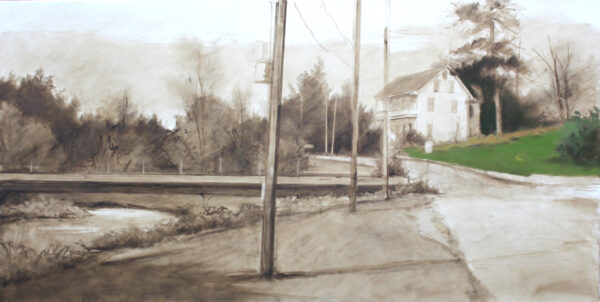 Color begins to be added, matching the established values. 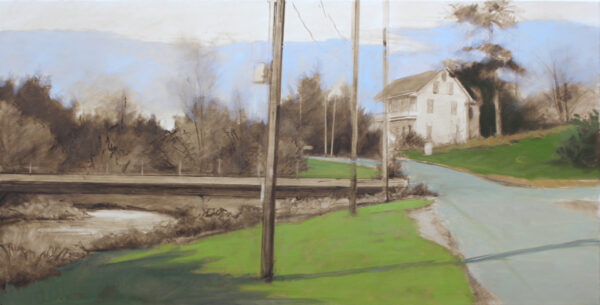 I don’t know how I obtained this brush, it’s an Evergreen Sword by Rosemary. The brushes I use for painting are simple and traditional, but I thought I’d give this one a try on the evergreen tree by the house. It seemed somehow appropriate to use an Evergreen on an evergreen. The result took me by surprise and only took a few minutes to execute. 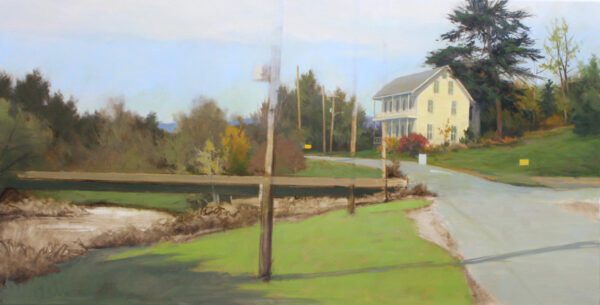 The whole area of the bridge, river, shoreline, and surrounding trees gave me considerable stress. The photo did not provide the necessary information. I wanted to create depth and some understanding as to what was going on in this area. After several rub-outs, I still wasn’t happy. 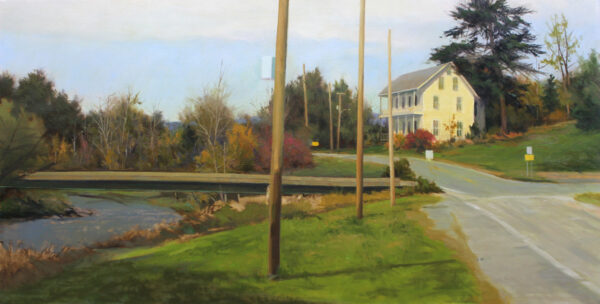 Still not happy. Decided to move on to other parts of the painting. 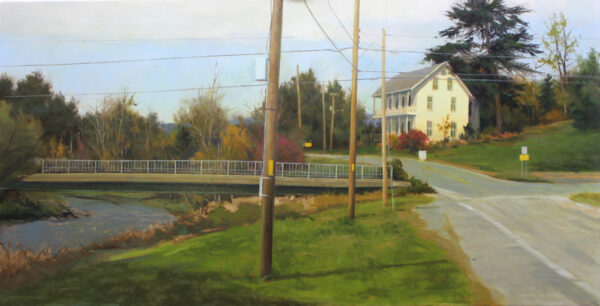 Finally came up with a solution to the river and shoreline I was happy with. I thought the foreground grass would be easy. It took many redo’s before it was considered satisfactory. A car was also added to the scene, increasing the narrative. 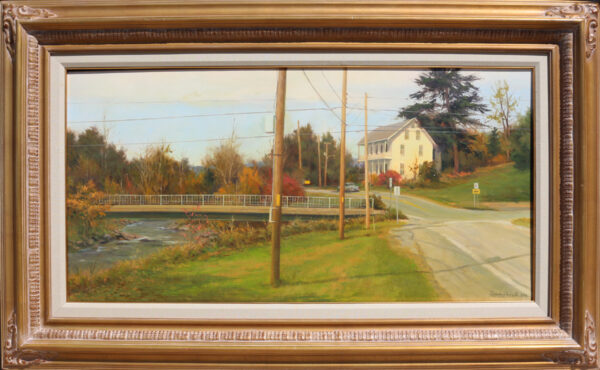 “Junctions” – 20″ x 40″ – Oil   (Well considered titles for paintings are important to me. I believe a good title contributes to the narrative and artist’s intentions. There are three junctions in this painting, all leading somewhere…a destination, confrontation, expectation, exploration, or maybe even the fulfillment of a long held dream).

The Oil Painters of America Western Regional Juried Show will be held at the Southwest Gallery in Dallas from 10 September through 5 October 2022.