As professional artists, in my case a painter, it’s an easy thing for the work to consume us. Even when not painting we’re thinking about it…ever looking, analyzing, composing, critiquing, and visualizing new possibilities. The danger, of course, is believing our identity and value as a person is in being an artist. An artist is not who we are, it’s merely what we do. In this regard, I enjoy reading artist biographies, particularly when they delve into the deeper aspects of the artist’s life…the intimate facts of their spiritual beliefs and character traits; those are the subjects that I find especially revealing about any artist. 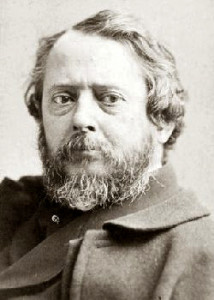 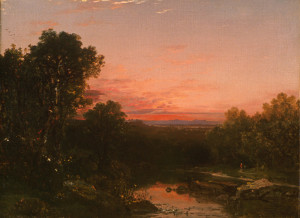 It was nice to discover some of these revealing facts about John Frederick Kensett in an October 1966 American Artist magazine article. Kensett had a relatively short life. He only lived 56 years (1816-1872). He is closely associated with the Hudson River School of painters, but as he became more preoccupied with light and its effects, rather than the detailed accuracy of a scene, he became associated with what is now termed Luminism. 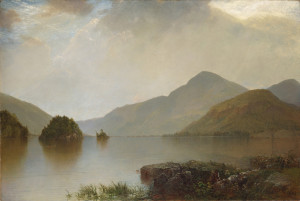 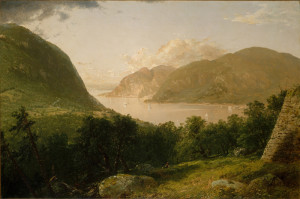 During the Civil War, Kensett was actively raising money for charity. His generosity and compassion made him one of the most beloved of the Hudson River painters. He also led the fundraising effort in 1863 to erect the first National Academy building and was a founding member of the Metropolitan Museum of Art in 1870.

A eulogy upon his passing stated: “…an artist at once so admired, gifted and beloved, and whose memory is endeared to us by the recollection of the sweetness of his personal qualities as a man, and by the grace and charm of his work as a painter. All familiar with his pictures recognize in them the prevailing attributes of his character – Truth and Simplicity.” It reminds me of our friend Camille Corot, who was also highly esteemed for his kindness and generosity toward others. 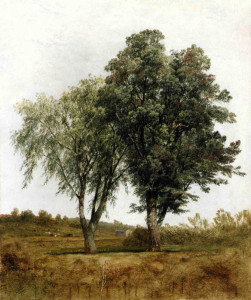 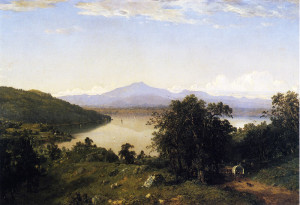 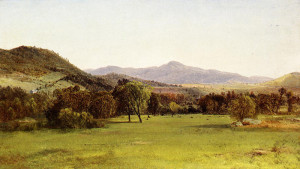 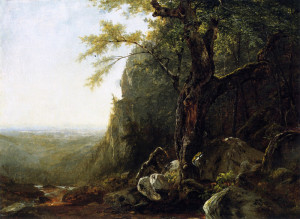 From the American Artist article: “The paintings of John F. Kensett stand apart from those of other American artists of his period for their pronounced poetic softness and simplicity of concept. They convey a serenity, an atmospheric charm and fidelity to nature to an extent seldom encountered in the canvases of his nineteenth-century contemporaries. These are qualities inherent in and consistent with his personality: never bombastic or flamboyant. Nor did he attempt to press his imagination further than his artistic attributes allowed. Rather, he absorbed and depicted what was spread out before him with utter adherence to his individual vision and personal expression. His aesthetics do not whip up one’s emotions with turbulent themes or brilliant palette. Instead, one is held by a pervading peacefulness, a sense of deep repose. 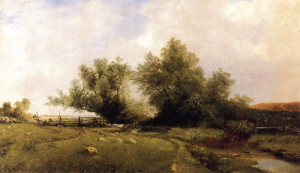 “Yet, for all this quiet, there is a strength in this very gentleness, an emotional stirring that derives its effect from the absence of forced or emphatic statements. Here is thoughtful painting expressive of an artist with a specific kind of talent who understood the gift peculiar only to him, and who recognized his limitations. It is this self-understanding, this self-perception that stamps Kensett as exceptional. The esteem in which he was held throughout his career was for this honesty and the intelligent pursuit of his art, the painstaking perseverance wherewith he developed in the utmost that which was basically his own true temperament. He did not seek to go beyond, but cultivated his natural resources to the highest and fullest extent. It is the poetic tenderness and integrity in his paintings that reach out to the viewer and which, in a recent revival of his work, have brought him renewed acclaim.

“Since boyhood, Kensett followed a chosen career with full awareness of the narrow range of his aesthetic powers. He never deluded himself on this fact, but concentrated on achieving the technical perfection necessary to do complete justice to his abilities. Nowhere in his letters or diaries does he make claim to, nor is he boastful of, inspirational greatness. We find only repeated references to his determination to conquer the mechanical problems involved and to perfect his craft so that he might one day be a capable, respected, and successful artist.”

All this he accomplished. In a relatively short lifetime, the name of John Frederick Kensett attained real prominence both here an abroad.

I am continuing to offer to you, my newsletter subscribers, blog, and Facebook followers, something special…and up until now…unseen color studies that I’ve done over the years in preparation for a larger piece, or as stand alone works of art. These color studies are done on 100 lb archival paper that has received one coat of gesso; paper size is 5.5″ x 8.5″ and contains my notes: date painted, location, palette used, etc. Each study is offered in three configurations: 1) Image with notes (unmounted); 2) Image with notes (mounted on board); 3) Image only (mounted on board). This week’s offering is a study for “The Narrow Gate”. If interested in owning one of my works, here’s a very affordable opportunity. For now, these offers are only for those in the United States; I will pay all shipping and applicable sales tax. Click on image to enlarge. Let me know of your interest. Thanks. 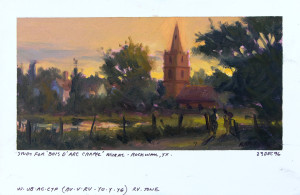 I am very pleased to announce the release of my first instructional DVD, Limited Palette Landscapes, professionally produced by Liliedahl Art Videos. The video contains over 15 hours of instruction and follows my painting process from selection of the canvas to the final brush stoke. For a detailed description of the video contents, including a short video…and order instructions…please click HERE. Thank you in advance for adding this DVD to your video library. Upon viewing, if you would kindly share your comments with me, I would greatly appreciate it. THANK YOU.