Exactly 100 years ago yesterday (January 30th), artist John Francis Murphy (1853-1921) died in New York of pneumonia. Never heard of Mr. Murphy? I can’t say I knew much about him either, but when seeing his work sometime ago, I decided to investigate.  (Click images to enlarge) 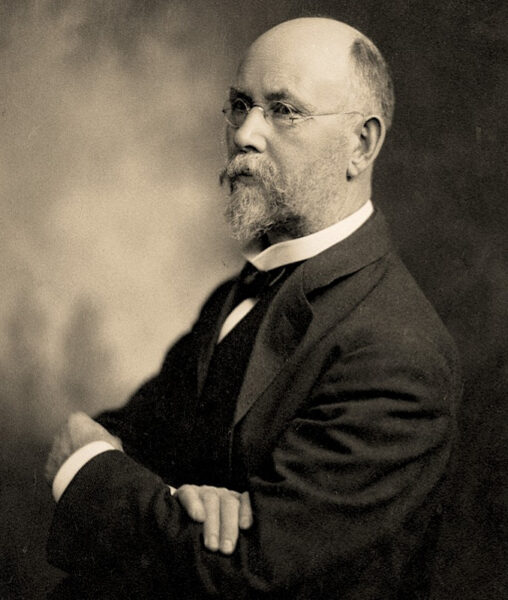 Born in Oswego, New York, he moved with his family to Chicago when he was fifteen. It was there that the young Murphy found work as a painter of theater sets and advertising billboards. He also took a few art classes at the Chicago Academy of Design, but he was basically self taught. By the age of 20, his art skills must have already been quite advanced because the Chicago Academy elected him as an Associate, and just a few weeks later as a full Academician.

In 1875 at the age of 22, Murphy moved to New York City where he began a long association with the National Academy of Design, becoming a full academician in 1887. He was also a member of the Salmagundi Club, Society of American Artists, the American Watercolor Society, the Rochester Art Club, the Brooklyn Art Club and the Lotus Club. 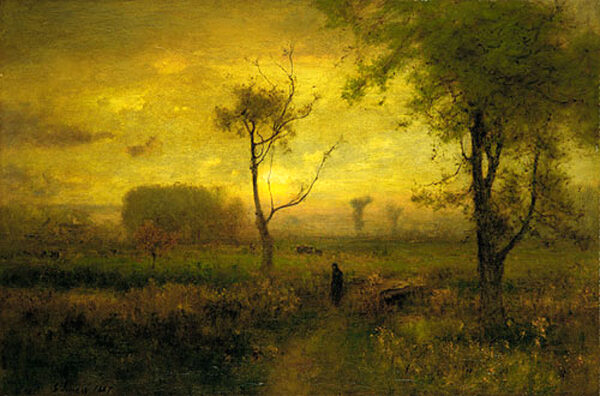 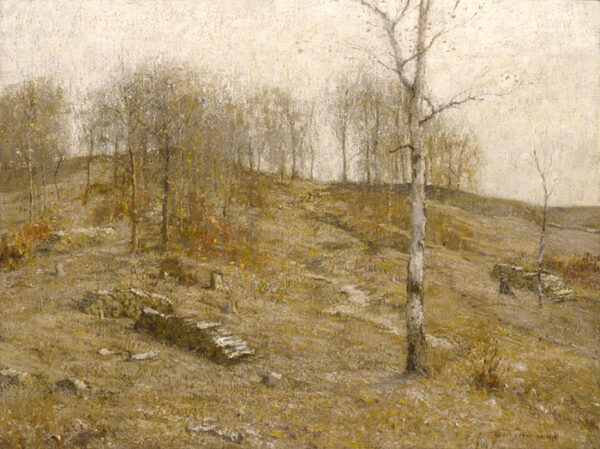 Tonalism is an artistic style that emerged in the 1880s when American artists began to paint landscape forms with an overall tone of colored atmosphere or mist. Between 1880 and 1915, dark, neutral hues such as gray, brown or blue, often dominated compositions by artists associated with the style. During the late 1890s, American art critics began to use the term “tonal” to describe these works. Two of the leading associated painters were George Inness and James McNeill Whistler. Tonalism is sometimes used to describe American landscapes derived from the French Barbizon style, which emphasized mood and shadow. 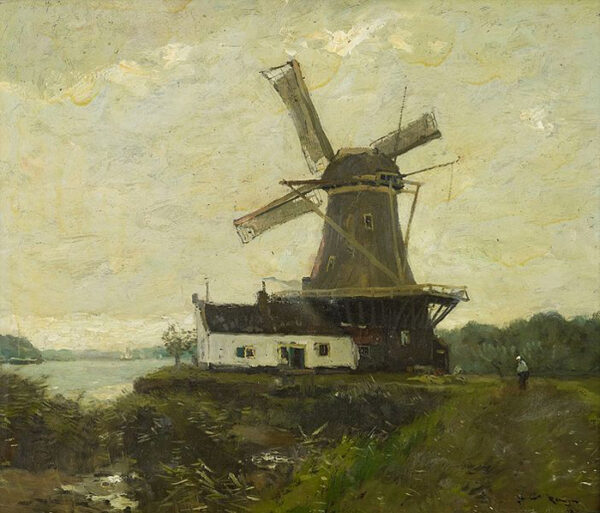 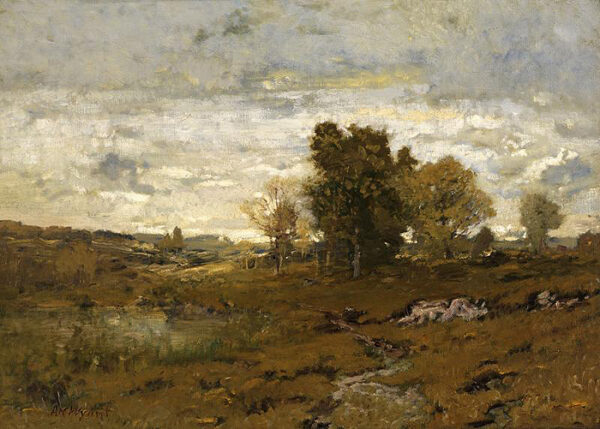 He’s recognized as one of America’s premier Tonalist painters. His early influences included George Inness, Homer Dodge Martin, Alexander Wyant, and the French Barbizon painters, Corot, Rousseau, and Daubigny. His style is also reminiscent of Bruce Crane and Henry Ranger. However, it was actually the impact of Alexander Wyant’s work in the mid 1880s that influenced Murphy’s eventual style; both had spent their summers at Arkville in the Catskill Mountains where Murphy’s Tonalist style began to develop. Prior to the style change, his crisp, descriptive paintings were in the style of the Hudson River School. Under Wyant’s influence, Murphy’s work consisted of stark expressions of barren wind-blown land painted with a limited palette. He typically prepared his canvases early in order to give the underpainting of brown and gold paint, flattened with a palette knife, time to dry. Once dry, this surface became the foundation for later stages in which rubbing (with pumice), lacquering and glazing were techniques used to achieve tonal unity. 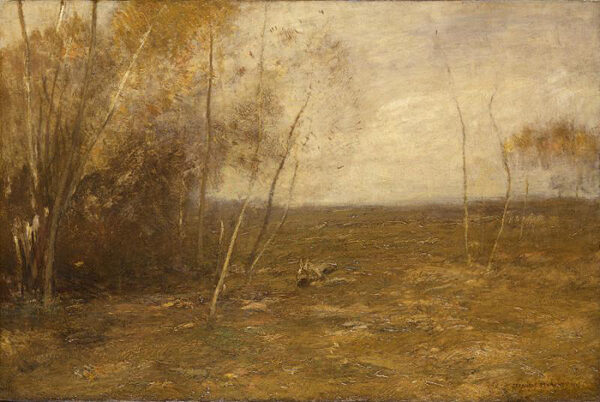 John Francis Murphy – “The Sprout Lot” – 27″ x 41″ – Oil  (1915) – Murphy’s warm toned paintings were very popular but his lengthy series of Indian summer landscapes received even greater acclaim. This was one of them. 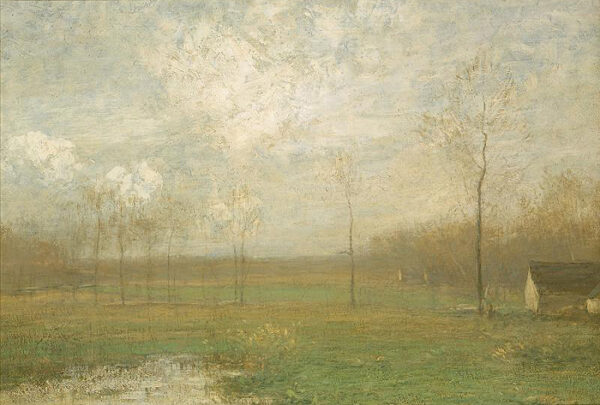 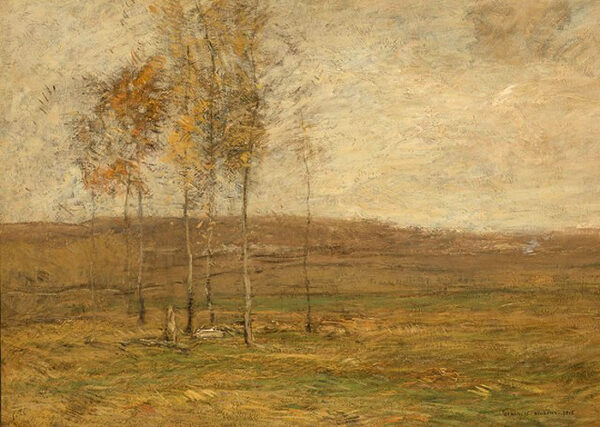 Vose Galleries in Boston has written an outstanding tribute to John Francis Murphy. “By the time of his sudden passing in 1921, John Francis Murphy had risen from humble beginnings in upstate New York to become a highly respected, and greatly mourned, member of the American art world. In a rare front page obituary published by American Art News, he was remembered for his genial, kindly personality, and for his distinctive approach to capturing the feeling of nature on canvas.

“Murphy synthesized his own personal style from the limited palette typical of Tonalism, the rough surface textures of Impressionism, and an absorption in the expressive possibilities of nature. Although a few critics failed to appreciate his masterfully understated approach to his subject and grumbled about the seeming monotony of his landscapes while other painters found fame and fortune through more experimental or commercial motifs, many others recognized him as the clear successor of George Inness and Alexander Wyant.” 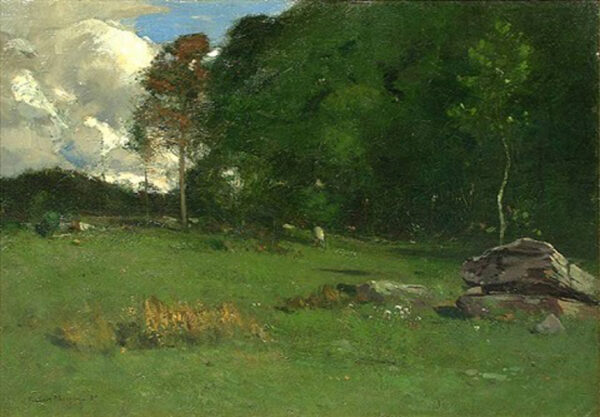 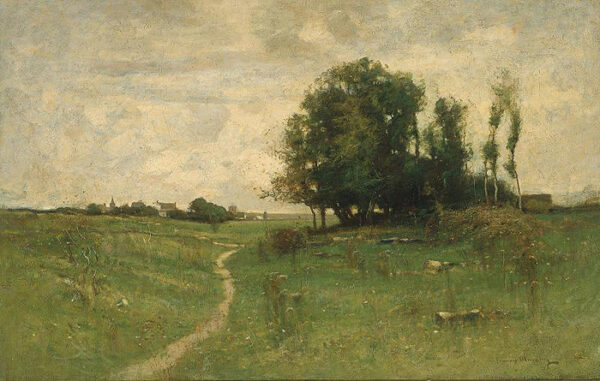 The effects of landscape that Murphy loves to paint may not be called “striking”…Rather are they subtle and tender, and their charm grows greater on the spectator the longer he looks. Poetic in feeling and synthetically handled, but preserving the right amount of detail, they are among the choicest products of the flourishing epoch in American landscape painting.

After about 1885, Murphy worked less from direct observation and more from memory, concentrating on nature’s brooding periods, her aloofness from change and stress. As his style developed, it became more poetic as he attempted to capture the landscapes lyrical potential through his own emotional response to it. Through an expressive use of tone, glazing, and surface texture, he sought to faithfully capture atmospheric effects. His work brought acclaim and financial success. Some reviewers dubbed him “the American Corot”, due to the similar tonality of their work…a palette of pink and grayish-green with golden browns. 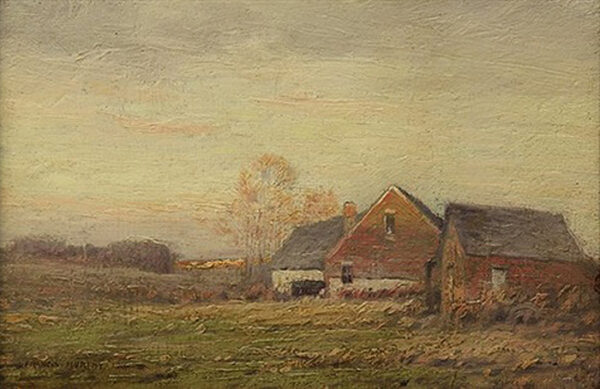 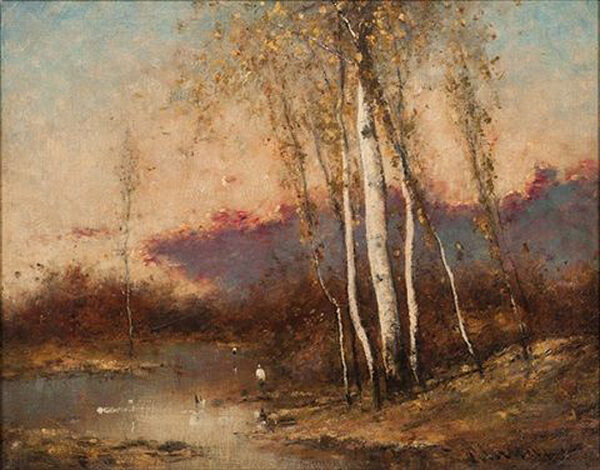 Murphy received many awards throughout his lifetime, including medals at the World’s Columbian Exhibition, 1893; the Pan-American Exposition of 1901; the Charleston Exposition, 1902; and the Panama-Pacific International Exposition of 1915. His work is in many esteemed collections, including the Metropolitan Museum of Art, New York; the National Gallery of Art, Washington, D.C.; the Smithsonian American Art Museum, Washington, D.C.; the Art Institute of Chicago; and the Museum of the Fine Arts, Boston.