Winner of the “Donors’ Award of Excellence” at the 2013 Oil Painters of America 22nd National Juried Exhibition, John Austin Hanna discusses his illustration background, his transition to a successful fine art career, and his current work.

Illustration as preparation for the fine arts

John Austin Hanna believes his 20-year commercial illustration career in New York and Dallas prepared him well for what has become a successful career in the fine arts. The Fredericksburg, TX artist enjoyed working with many types of professionals, included among them, Bill Neale, an important Dallas artist and art director who was “largely responsible for me going to New York. Illustration taught me to communicate ideas effectively. Even though those ideas weren’t always mine, decisions had to be made that communicated clearly and creatively those ideas. You really won’t make it if you can’t draw and have a good sense of design”, he said.

Transitioning from illustration to fine art was not that difficult for him. “The kind of painting I do is not that much different. The major difference though is not knowing if anything will sell. At least in illustration I got paid, most of the time, for everything I did.” Hanna seems to have a laid back, relaxed approach to his work. He paints anything and everything he is interested in, and does it well, with little concern whether his style will be unique…and yet, it is. Maybe this lack of concern, the variety of subject matter, and the large quantity of work he has produced has been a contributing factor. 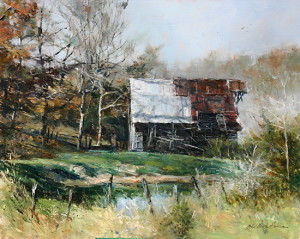 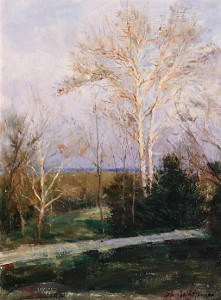 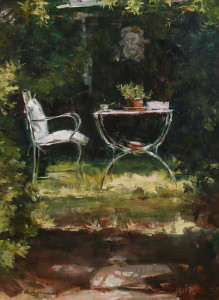 He doesn’t call himself a plein air painter but he does believe painting on location is important because it teaches us to see…to see what things really look like.

Selection of subject and working method

The ideas for his paintings come from things he has observed. “The subject pretty much selects me,” he says, “it’s something that just hits me.” When blocking in a painting, his method is loose and free. Normally, he dives right into a painting with very little preliminary work. He prefers to work out his ideas on the canvas during the block-in phase by moving elements around until he gets what he wants. He is not a slave to any set rules of composition. “I should spend more time attempting to simplify and minimize value masses, for I really admire those who do it well.” Even though he pretty much knows what the completed work will look like, he keeps an open mind, always willing to change direction if it will result in a better work. However, when asked how he knows when a painting is finished, he quipped, “When I’m halfway pleased.” 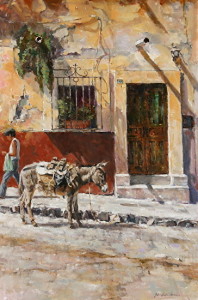 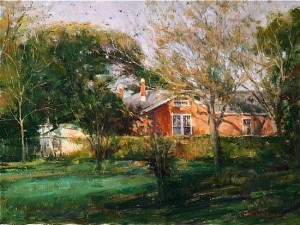 When working from photos he is aware of their distortion and lost details, but he also believes they have value in that they can help the artist to simplify. “The most difficult part of a painting for me is the middle…and putting enough paint on the palette. I do hope however, when all is said and done, that the end result will be paintings that stir feelings of personal importance in others.” 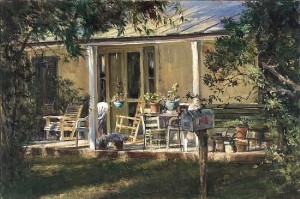 Hanna’s paintings are not “pretty” pictures. They do not romanticize, sanitize, or glamorize the subject. There is a gritty reality to them. When walking through his fields you’ll need boots for you just know those fields could be full of stickers, cockleburs, and grasshoppers. Knock on the door of one of the old houses and you might very easily encounter a crusty old guy with a shotgun.

Getting Hanna to define art proved difficult. “It’s the age old question. It is what man has done since the beginning of time. A lot of fads come and go. What was considered illustration years ago is now bringing big bucks…as fine art. John Canaday’s book, ‘What is Art?’ is the last and only answer to the question. However, whatever its definition, it is an inexhaustible enrichment for life.” Whatever art is, it is a definite part of the Hanna family. His son and wife own a beautiful little gallery in Fredericksburg called the R.S. Hanna Gallery. They represent some very fine artists, including a nice selection of John Hanna’s work. 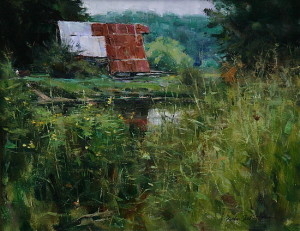 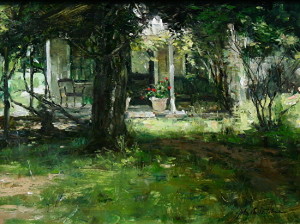 When asked what advice he would give first-time collectors…”Buy original art; read about it, and go see it. Buy what you like; it’s a learning process” To become a successful artist there is only one way: practice, practice, practice, along with perseverance and a lot of luck. He also suggests the young artist/painter should “paint more, talk less; look at everything: galleries, museums, etc…and observe.” Asked which three artists have enriched his life and with whom he would like to spend the day…his answer: Richard Schmid, John Singer Sargent, and Joaquin Sorolla.

John Austin Hanna in his studio

Thanks, John, for this interesting interview. We appreciate it.