Just one month separated the deaths of two of my favorite artists. One died wealthy and highly esteemed in the eyes of the public, art critics and fellow artists…the other died relatively poor, having been misunderstood by the public, ridiculed by art critics, and pretty much ignored by fellow artists. Both were French, possessing a reverence for God and His word, the Bible. Each had been closely associated with a group of artists painting in Barbizon, France during the third quarter of the 1800″s. 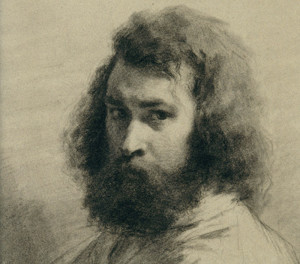 Corot was greatly admired by artists of his day. Monet accorded him high praise when he said, “There is only one master here – Corot. We are nothing compared to him, nothing”. While Corot’s landscapes were praised as being poetic, it was said that Millet’s painting had a “brutish dourness” and that they “irked the smooth shaven bourgeois”. 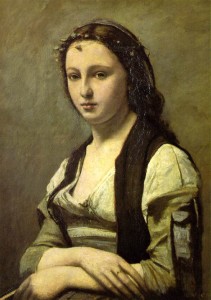 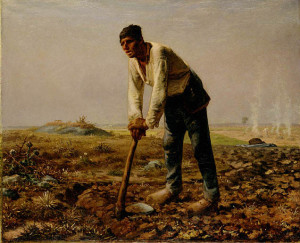 Late in life Millet did finally receive some awards and recognition, but generally during his career he was largely ignored by writers and unappreciated by fellow artists. His one, unabashed supporter was Vincent Van Gogh and his closest friend was Theodore Rousseau, a fellow painter of Barbizon.

Jean-Francois Millet was born on October 4, 1814 in the seaside village of Gruchy, France. He was apparently very intelligent but because of his shyness, lack of glibness, aversion to the fashionable and sophisticated, and his strongly held beliefs…he was perceived as being a simple man. His stocky appearance and obsessive desire to paint the “common people” probably didn’t help matters any either.

Millet may have been one of the first to truthfully capture the life of the peasant. Artists typically tended to sanitize and glamorize the life of these folks, but Millet showed them as people of the soil…toiling, sweaty, exhausted and dirty. 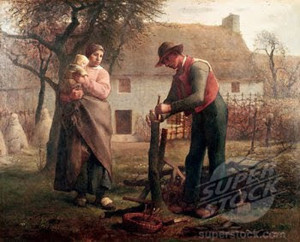 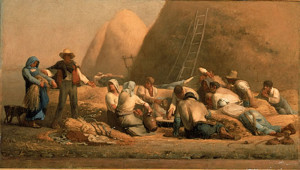 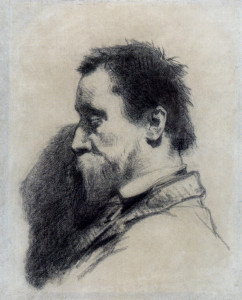 Everything about Millet’s style contributes perfectly to the subject…the earth toned palette, the rather rough paint handling, and the dark, moody, melancholy atmosphere. His figures are very solid, possessing a strong, three-dimensional sculptural quality, reminiscent of his greatest influence, Michelangelo. Millet’s peasants are people of the soil.

His work is also distinguished by its simplicity of value (light/dark), and color. He eliminated the unnecessary and grouped the subject into as few value shapes as possible. This gives his work the sculptural quality that is so distinctive, while also adding to the grandeur of the subject. 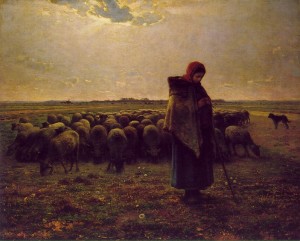 The very thing that makes Millet’s work so appealing to me was a huge irritant to the critics of his day…they were wanting more detail and Millet wouldn’t give it to them.

He also favored a subdued palette. One cannot find harsh color notes in his paintings. Andre Fermigier, author of the book, Millet, states that Millet had a keen eye for color. His studio contained “a collection of rags and bits of cloth, of different colors, faded and weather-stained, fragments of head-handkerchiefs, blouses, petticoats, etc., affording shades of color more exquisite than any dyer could produce. Millet made great use of these in his painting, taking from them suggestions of color which he said he could have got in no other way. The almost innumerable shades of blue, from the dark indigo of the new blouse or apron that had never been washed to the delicate tints of time-worn garments that had been bleached almost to whiteness, were his special delight”. 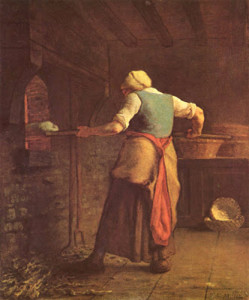 It was only after his death that J.F.M. became incredibly popular, and it was mainly because of just one painting, The Angelus. It may be the first indication of mass marketing, for images of the painting were just about everywhere. It was reproduced as prints, etchings, and embroidery. It also showed up on packaging, plates, even store signage. 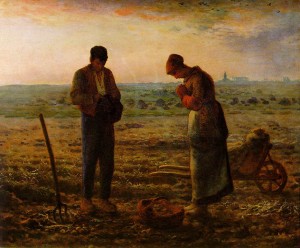 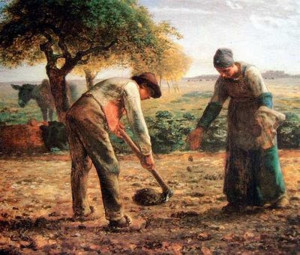 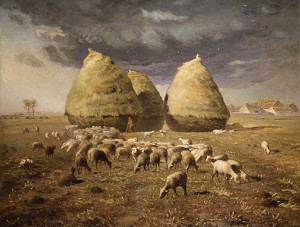 Summing up the life work of Millet, his close friend Philippe Burty wrote: “He painted the country and agricultural life as he knew it. With scrupulous accuracy he recorded the old peasantry still attached to the traditional implements and clothing, still the victim of manual labor, who will very soon be made unrecognizable by town-bought clothes and farm machinery. Combining as he did a deep knowledge of the human heart with a broad grasp of facts, Millet will number among the true painters of history, in the deepest and most literal sense of the term.

Sources for this article: “Millet” by Andre Fermigier, Rizzoli International, Inc., 1977 and the Art Renewal Center