There is such a sense of accomplishment, relief and satisfaction when we can sign our name to a painting. Knowing that we have done a good work, all that we can do to the best of our ability, we lay down our brushes and say, “It is finished.” But is it really? Yes, for that moment in time the work is finished, but what about five years down the road when we have more insight, creativity, experience, and technical know how…is it finished then? For us creative folks when we think about it, maybe those words are more fluid than we want to admit. Maybe those words don’t actually exert a stamp of finality after all.

However, there was One who spoke those words more than 2000 years ago, that when spoken kingdoms fell, the earth shook, rocks split, and tombs of the righteous saints suddenly opened, their dead coming to life and appearing to many. Additionally, and most incredibly, the massive, thick, heavy curtain in the Jewish temple that covered the entrance to the Holy of Holies (God’s dwelling place among the Israelites), was ripped in two from top to bottom…not by the hands of man but by the hand of God.

Something phenomenally great had just been accomplished, something so great in fact that it could only be accomplished by God himself…by the One who is infinitely perfect and holy, and who had the absolute authority to declare “It is finished.” Those three words may be the most powerful, world changing, individual changing words ever spoken.

So what was finished? Well, the curtain that concealed God’s presence from the people in the temple had great physical and symbolic significance. So great and fearsome was this visible/spiritual separation between God and man, that only once a year on the Day of Atonement could a high priest, chosen and prepared for the occasion, actually enter through the curtain, and that, for a very specific reason…to offer an atoning sacrifice for the sins of the nation. For hundreds of years, this act of atonement had been imprinted on the hearts and minds of the people. 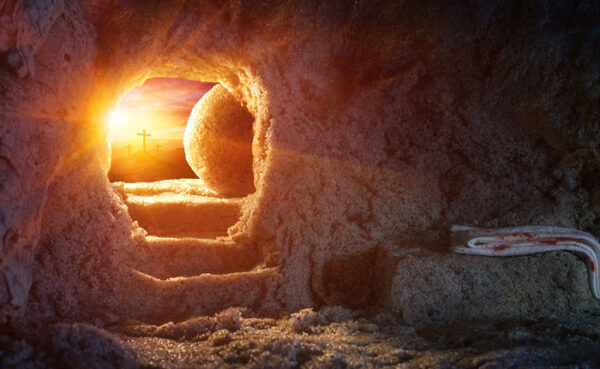 But now, on this particular Day of Atonement 2000 years ago, Jesus, the Son of God, offered himself as the atoning sacrifice. The blood of God himself, rather than that of animals, was an infinitely superior sacrifice. It was so superior that no other sacrifice can ever be performed that can atone for man’s sin. The old way has passed away forever. As proof that God the Father approved of and accepted His son’s sacrifice, the earth shook, people were raised from the dead, and the curtain was ripped from top to bottom…exposing the Holy of Holies…and forevermore removing that barrier between God and man. Three days later, the most crucial and powerful evidence of the Father’s acceptance of His son’s sacrifice was His resurrection from the grave. Now, He sits at the right hand of the Father, forever interceding for those that place their trust and complete confidence in Him and his atoning sacrifice on their behalf.

“Christ said, ‘It is finished’ and by that He meant that whatever His people owed was wiped away forever from the Book of Remembrance” – Charles Spurgeon

So what do Christians celebrate this time of year? We celebrate Jesus, the Son of God, who came to earth in the form of a man. He came in fulfillment of Old Testament prophecies that spoke of His birth, His life, His purpose in coming, and His substitutionary, sacrificial, death as an atonement for man’s sin. His resurrection from the dead sets Him apart from every other self proclaimed god or religious movement. Jesus alone has the authority to declare that He is the only way, the only truth, and the only life; no one can come to the Father and enter the kingdom of God except through a total trust in Him and His atoning sacrifice for one’s sins.

On the cross when Jesus breathed His last and said, “It is finished”, He ended, once and for all time, a sacrificial system aimed at earning God’s favor, seeking forgiveness, or making oneself acceptable to Him. He ended the fear of death and the grave for all those that place their trust in Him. As we are identified with Him in His death, we are also identified with Him in His resurrection; the dead saints that came up out of the tombs upon Jesus’ words are a foreshadowing of what all believers in Christ will one day experience.

By grace you are saved through faith, and that not of yourselves, it is a gift of God, not of works lest any man should boast. Hallelujah! IT IS FINISHED.