There were parades, and picnics, and parties, and ball games, and dancing, and drinking, and music, and laughter, and fire works; just another annual excuse for a party. Independence Day we call it…a fourth of July celebration…all the while being oblivious to our gradual loss of freedom but increasing enslavement.

For well over 200 years we’ve been celebrating Independence Day, but to me, this year things are significantly different.

What was intended to commemorate our independence from the British Empire and the recognition of 13 American colonies as a new nation, now represents something quite different. 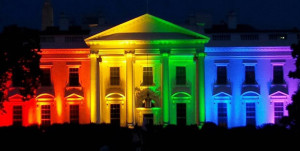 Those currently in charge of our government, including the Supreme Court, have arrogantly declared homosexual marriage to be legal and enforceable and equal with marriage between a man and a woman. Through our leaders, the nation has given God the finger and boldly and arrogantly declared that as a nation we are not interested in His commands, thereby demanding their independence from Him and His laws. “We shall have it”, they say.

This was dramatically and pridefully demonstrated when the White House was transformed into rainbow colors…the symbol of the (LGBT) lesbian, gay, bi-sexual, transgender community.

This “in Your face” gesture declares the nation’s rebellion and hatred toward God, and all that He stands for. 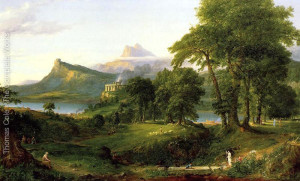 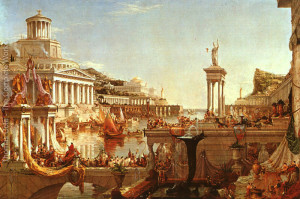 So what’s next? I believe with this gesture and with approval from the highest court in the land, that according to Scripture, there has been a turning of our nation over to increasing evil and depravity. The judgment of God is upon the United States of America. Arriving at this point in our history did not occur overnight, for there are forces of evil continually at work in the hearts of man. By not resisting the evil tendencies of one’s sinful nature, righteousness wanes while wickedness expands in the human heart and all of society suffers. The very nature of immorality is to always expand, never being satisfied with just a little.

Is there any hope? Yes, only if there is a nationwide repentance and a turning away from our many sins, and in humility seeking God’s mercy and forgiveness. Make no mistake, I am not talking about just any “god”, but only the God of the Bible whom revealed Himself to us through His Son, Jesus Christ.

Wonder what we’re in for unless this repentance takes place? Here’s the answer.

For I am not ashamed of the gospel, for it is the power of God for salvation to everyone who believes, to the Jew first and also to the Greek. For in it the righteousness of God is revealed from faith to faith; as it is written, “But the righteous man shall live by faith.” 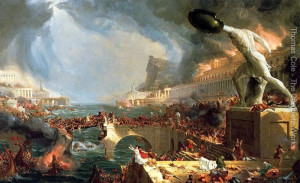 For the wrath of God is revealed from heaven against all ungodliness and unrighteousness of men who suppress the truth in unrighteousness, because that which is known about God is evident within them; for God made it evident to them. For since the creation of the world His invisible attributes, His eternal power and divine nature, have been clearly seen, being understood through what has been made, so that they are without excuse. For even though they knew God, they did not honor Him as God or give thanks, but they became futile in their speculations, and their foolish heart was darkened. Professing to be wise, they became fools, and exchanged the glory of the incorruptible God for an image in the form of corruptible man and of birds and four-footed animals and crawling creatures.

Therefore God gave them over in the lusts of their hearts to impurity, so that their bodies would be dishonored among them. For they exchanged the truth of God for a lie, and worshiped and served the creature rather than the Creator, who is blessed forever. Amen.

For this reason God gave them over to degrading passions; for their women exchanged the natural function for that which is unnatural, and in the same way also the men abandoned the natural function of the woman and burned in their desire toward one another, men with men committing indecent acts and receiving in their own persons the due penalty of their error. 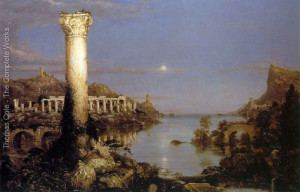 And just as they did not see fit to acknowledge God any longer, God gave them over to a depraved mind, to do those things which are not proper, being filled with all unrighteousness, wickedness, greed, evil; full of envy, murder, strife, deceit, malice; they are gossips, slanderers, haters of God, insolent, arrogant, boastful, inventors of evil, disobedient to parents, without understanding, untrustworthy, unloving, unmerciful; and although they know the ordinance of God, that those who practice such things are worthy of death, they not only do the same, but also give hearty approval to those who practice them.

Don’t expect God to continue to bless America when we are so obviously rebellious to His word. Sour grapes? We’ll see.