One of the important things most art bloggers will tell you is “DON’T blog about politics or religion.” Those subjects are just too controversial and volatile, and besides, “You’re just an artist; why don’t you just stick to art?” But, like most folks, artists are not just one-dimensional people. We too have strongly held opinions and concerns on both topics and therefore I occasionally share mine…and I believe there are some things that are much more important than art. Freedom to be and to become what God has gifted us to be is certainly one of those things.

The article below, published in NewsWithViews.com, is by Chuck Baldwin, a pastor, radio host, politician, writer, and in 2008…the presidential nominee of the Constitution Party. “Will Freedom Survive 2015?” is a sobering account of the current state in which we find our beloved America. Agree or not, it isn’t to be just brushed aside. 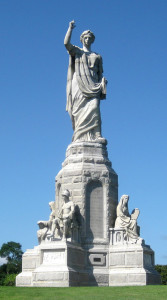 Something as precious and valuable as a nation’s freedom is not lost in a day–or even in a year. There is no single event that turns citizens into slaves. Oppression and tyranny are always long in the planning–and even longer in the making. Granted, there could be a single chain of events that results in a people’s enslavement: Lenin’s Bolshevik Revolution in 1917 Russia, Mao Zedong’s Communist Revolution in 1949 China, for example. But these events did not take place spontaneously or in a vacuum. Conditions for these enslavements had been ripening for years. Old barns don’t collapse without years–even decades–of mitigating factors (very obvious and noticeable factors). Neither do nations.

In a very real and practical way, the American republic was birthed as a strong and healthy body amidst the blood of the patriots in 1775 and ‘76. Suffice it to say, the free republic of our forefathers is a very weak and diseased body today.

The malady that eventually takes the life out of a sick and diseased man may not have, by itself, been deadly, but coupled with years of preceding sicknesses, it is the one that is listed on the death certificate by the coroner as the cause of death. Such is also the case with a nation.

The numerous ostriches that are so quick to dismiss every national warning as being just another Chicken Little false alarm continue to dismiss any new attempt to awaken a distracted people with what should be obvious to anyone who can see. In truth, the vast majority of Americans are behaving exactly as did the very rich and pompous passengers on board the Titanic. As the stewards were rushing room to room and cabin to cabin warning passengers that the ship was sinking, they continued to frolic and dance, completely deaf and indifferent to the cries of the porters.

On the whole, the American people have ignored the warnings of freedom’s faithful stewards such as Barry Goldwater, Pat Buchanan, and Ron Paul. For the most part, the criers of liberty on the Internet and in talk radio are also ignored.

There are several reasons why so few seem to even see the water rushing up the floors of the ship of state. For one thing, too many of our men have abdicated their manhood. In the glorious history of liberty, when one would observe men with painted faces, they were marching into battle. Today, they are marching into football stadiums. Sports are more than a pastime; they are an addiction. Today’s American men are so beset by sports and pornography that they can barely see the reality that is staring them in the face.

A lying, deceitful, and deliberately conspiratorial national news media is also a major contributor to the collapse of the American republic. No doubt about it! Nazi Germany’s Joseph Goebbels had NOTHING on the propaganda machinery of the American mainstream news media. Put our public (and many private) education system on the list, as well. Yes, the entertainment pimps, who have sold their souls to lust and perniciousness and who love to corrupt the morals of young people, should also be on the list. And, last but not least, a very passive, indifferent, feel-good, corporate Church might possibly be the worst offender of all.

As we enter into 2015, all of the above are already eating the flesh away from Lady Liberty. The condition is near-terminal. Even worse is the recent prognosis of what can only be regarded as the final stage for this morally and politically cancerous-ridden body: the Police State.

Perhaps not surprisingly, people who escaped totalitarian regimes in other countries and fled to America are the ones who more readily recognize the rise of totalitarianism here in the U.S. than those of us who were blessed to be born here.

And in case someone is forwarding this column to a friend or relative who is still in the dark that, yes, America is ALREADY living under a Police State, I invite them to keep an eye on the Police State page on my website for continuing examples of that reality.

But I warn you: be prepared to spend a lot of time getting current, because the facts and realities that America is already a Police State are multitudinous.

The only remaining question is when will the PTB (Powers That Be) decide to collapse the curtain? Will it be 2015?

We are being set up BIG TIME for another faux-9/11 event: Ferguson; the Paris attacks; ISIS; Senator Dianne Feinstein talking about terror cells already being in the states; Senator Lindsey Graham’s fear-mongering; Senator John McCain’s fear-mongering; the media’s ubiquitous assault against the Second Amendment; the Supreme Court’s continuous rubber stamping of domestic spying; an arrogant White House that illegally acts with impunity against the liberties of the American people; a cowardly and complicit Republican Party that works to protect the big-business interests of Wall Street more than the liberties of the people on Main Street; ad infinitum.

No, I suppose there is one last question: will the American people ever wake up? And, of course, the even greater question is, will the Church ever wake up?

Will freedom survive 2015? There have been a myriad of contributing factors to America’s demise extending over a long period of time, but a Police State is the last and final stage of a diseased and dying nation. We are in that stage NOW. And America’s pastors are the only antidote.

This is no game, folks. If you believe in liberty for our country and for your children, you must get out of these corporate churches that are dancing with the devil and letting the forces of hell obliterate our liberties. If your pastor isn’t preaching the Biblical Natural Law principles of liberty, find one who will.

Let me ask it this way: will freedom survive 2015 if it depended on the pastor of the church that you now attend? If the answer is “No,” why are you still there?

Printed with permission of Chuck Baldwin