Well, I just returned from a five-day Artist in Residence Program in Clarksville, TX. I was honored to be the first invited artist to set this newly established program in motion. The plan is to invite established and emerging artists to the area, provide a creative environment for them to work, and enrich the community through exposure to working artists.


A typical residency will last from one to two weeks and will eventually include writers, musicians, and filmmakers. Right now, the Artist in Residence Program is only open to Texas artists. Guidelines for future applicants are being established. There are plans to eventually acquire at least one work from each resident artist for the establishment of a permanent collection in the Old Jail Museum.


This great program is the brainchild of Steve Whalen and his artist wife, Deborah Paris. Something like this doesn’t just happen though. It requires a lot of backing and support. That support is provided by the Red River County Historical Society, headed by current president, Val Varley. Founded in 1961, the purpose of the Society is to preserve the history of the County. Since its founding, many historical landmarks and photos have been preserved. I benefited from one of those preservation projects, as I had the pleasure of staying in the very impressive and expansive, Queen Anne style Lennox House. Resident artists will now begin playing an important part in contributing to the work of the Historical Society.


The small town of Clarksville is located in far NE Texas, about 20 miles south of the Red River. I found the people friendly and possessing the endearing quality of being “down-to-earth”…real people, the kind my wife and I like being around. With a population of less than 4000, all news is big news. It must be true since my arrival made the front page of The Clarksville Times.


Actually, Clarksville, and its newspaper, have a pretty significant place in Texas history. The town derives its name from James and Isabella Clark who settled in the area in 1833. Many early day Texas pioneers passed through, including Sam Houston and Davy Crockett. Shawnee, Delaware and Kickapoo Indians also lived in the area.
Clarksville is part of Red River County, a county older than the State of Texas. The Red River District was huge, encompassing all or part of 39 present day Texas Counties. It was in 1842 that Charles DeMorse moved to Clarksville, purchased a home (it still stands), and became founder, editor, and publisher of The Northern Standard…the second oldest newspaper in Texas…and for almost 50 years, one of the most influential.
While in Clarksville, I pretty much had every day, all day, to paint, draw, explore, and photograph. Those that invited me were very concerned that I had plenty of time to create without interruption. Most evenings, events were scheduled including a reception dinner, cookout, and an art show in which I talked about the work produced and how I did it. One morning, I was invited as guest speaker at the local Rotary Club meeting…a lively/fun group indeed. 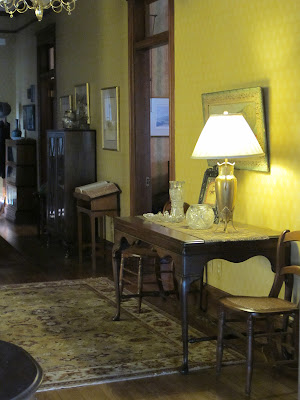 Home base was the Lennox House. Jim Clark VI, local banker, historian, and descendant of the town’s founders made sure my wife and I were comfortable and had what we needed.

I’m not a particularly fast painter. A better painter than I would have completed many more works in the same amount of time. The paintings of the Lennox House and storefronts required a lot of time…a lot of drawing. When it comes to such subjects, I’m a stickler for accuracy. I’m not interested in it looking “something like the Lennox House”, I want it to specifically be the Lennox House. That painting took three sessions: 1) Drawing, monochromatic block-in. 2) Color lay-in. 3) Foreground, refinements, accents.


I began painting in the town square on Sunday. It was really quiet except for a few folks coming by now-and-then. The Red River Antiques store captured my attention with all its interesting details. I was just beginning to set up when a couple of guys, who turned out to be workmen, came out of the building. One loaded up his car and left, the other went to his pickup, pulled it around, and parked it directly in front of me, totally blocking my view. “Sir,” I called out, “Could you please move your truck? I want to do a painting of the building.” Well, it seems, the only two words Gerald heard were ‘painting’ and ‘building’. “Oh, I don’t know, does the owner know that?” he asked. “I need to check with her.” While he was calling her on his cell phone, I said, “I’ll be happy to speak with her.” When she answered the call, Gerald said, “There’s a guy out here who wants to paint your store, is it OK?” Kathy’s response was, “Well, it would sure be nice if we could get together on the colors first.” Finally, when I did speak with Kathy, we both had a good laugh when she realized what I actually wanted to do…and also, she had heard of me after reading the paper. Later I came to learn that the city is involved in a beautification program. While working with the individual store owners, paint schemes are decided upon and the city provides the paint.
I thought It was a good idea to tackle this painting on a Sunday because it was so quiet on the square. Better to nail down the lower parts of the painting first, I thought, because, come Monday morning this place was going to be hopping. Wrong. It was quieter on Monday than on Sunday. In fact the stores are only open during the latter part of the week.

This has been my first experience with an Artist in Residence Program and it was very enjoyable. The Historical Society and all those involved with the program were very encouraging, made the stay very enjoyable, and allowed me to roam around and paint as I wished. The paintings are plein air studies and still require various amounts of work in order for me to consider them complete.
Cheers to Deborah Paris, Steve Whalen, Jim Clark, Anne Evetts, Val Varley and many others who went out of there way to make my wife and I feel welcome.
If you’re a Texas artist and find this Artist in Residence Program appealing, I would recommend you apply to participate.


**************************************************
I am pleased to announce my participation in the upcoming 2012 Oil Painters of America Western Regional Exhibition. If interested in purchasing this special painting, “Cherished Memories”, I invite you to contact Gallery 1261. The painting beautifully captures the feeling of those special times when all was right, autumn was in the air, and our best friends came over to play. 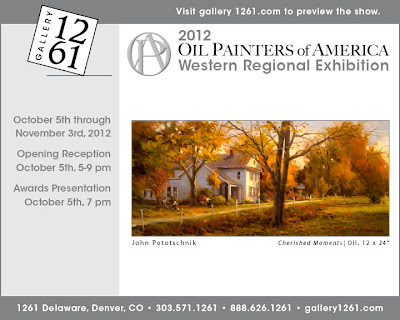 If you would like to receive my monthly newsletter, please click HERE
(My next blog will be posted on 21 October)
Thank you for visiting…and for your patience