It isn’t that I wasn’t aware of Pennsylvania artist Daniel Garber’s name before…I knew he was an early 1900s artist and that his work leaned toward Impressionism, other than that, you would have received a blank stare from me if asked more about him. All that changed however after my show at the Highlands Art Gallery in Lambertville, New Jersey with Elizabeth Robbins.

Kenn Backhaus, who lives in the area and is an excellent artist, suggested a visit to Jim’s of Lambertville, a New Jersey gallery specializing in the work of Pennsylvania Impressionists and what is known as the New Hope Colony. That’s where I first saw a Daniel Garber original painting. When Kenn also informed me that Garber’s home and studio were just a short distance away, we set aside a day to paint there. You may read about that experience HERE. (Click images to enlarge) 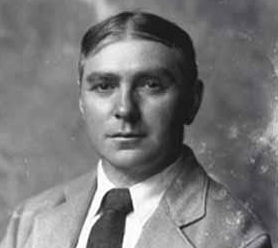 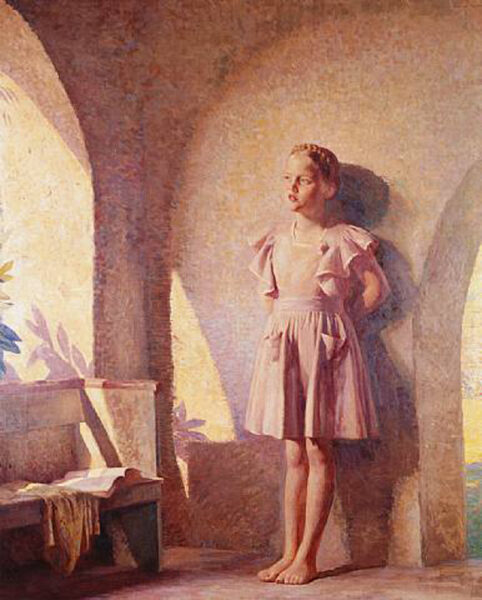 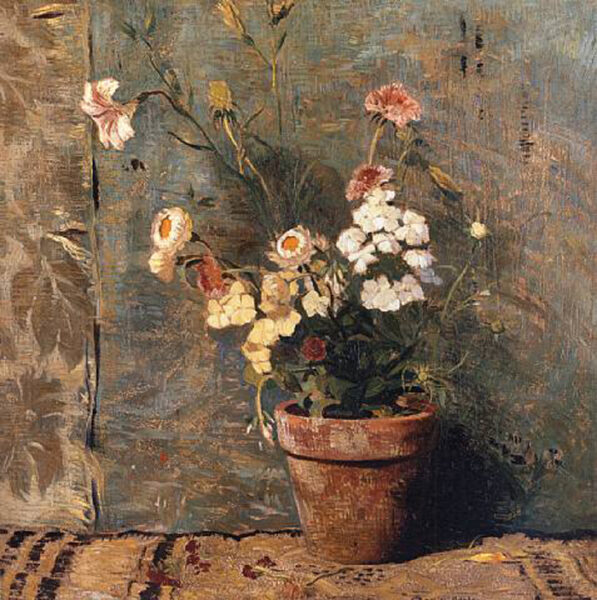 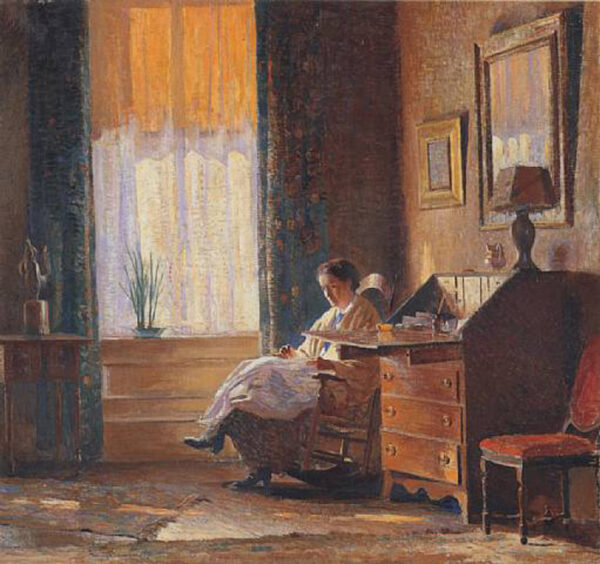 Garber was born in Indiana in 1880. Upon graduation from high school, he left for Cincinnati to study under Frank Duveneck at the Art Academy of Cincinnati. From 1899-1905, he was at the Pennsylvania Academy studying under Thomas Anschutz and J. Alden Weir. Anschutz studied under Thomas Eakins, whom Garber really admired for his honest and direct approach to painting. Anschutz encouraged his students to seek their own artistic direction, so in 1905 when Garber won a Fellowship, he went to Europe to study for two years; it was there that he found his artistic direction through the work of Claude Monet, Camille Pissarro, and Alfred Sisley. Upon returning to America he settled in Cuttalossa, just north of New Hope, Pennsylvania.

By the time he arrived, Pennsylvania Impressionism, centered around New Hope, had gained considerable recognition, mainly due to the arrival of Edward Redfield (1869-1965) to the area around 1900. Redfield was the central figure of the early Impressionist movement in the New Hope area. He attracted many other like-minded artists, including Daniel Garber, who moved there in 1907.  By 1909, Garber was back at the Pennsylvania Academy of Art, this time as an instructor. He taught there until 1950 and became one of the school’s most beloved instructors…spending his winters in Philadelphia and his summers in Cuttalossa. By 1916, enough artists were living in the New Hope area that they combined to form the New Hope Group. They exhibited extensively together for ten years. 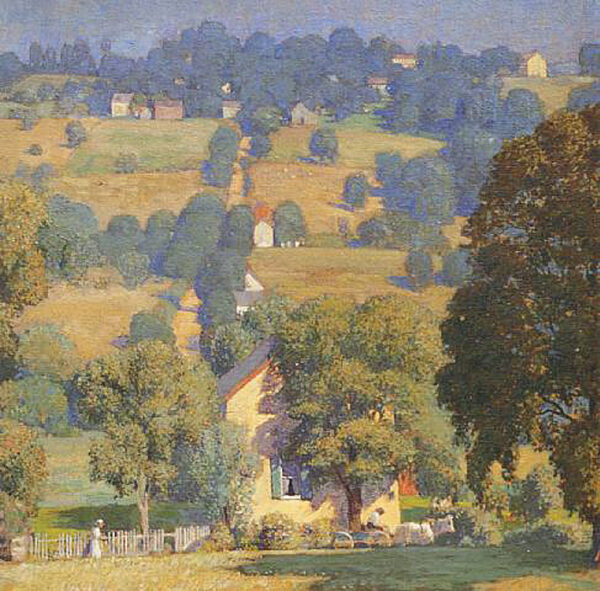 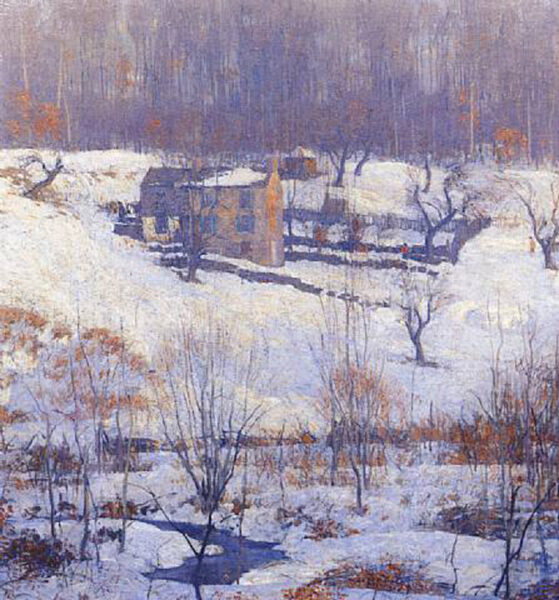 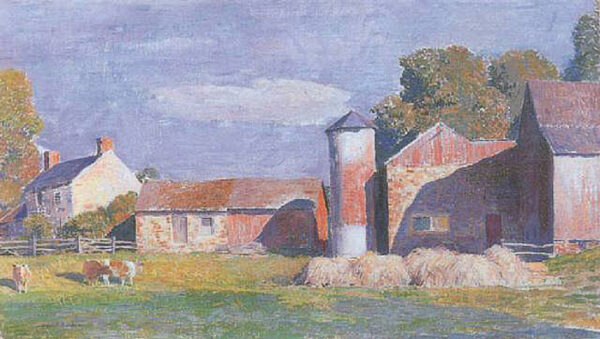 New York art critic and artist, Guy Pene du Bois, took notice of the Pennsylvania School of landscape painters, recognizing them as strong, virile, rugged and closely tied to the national landscape, their work totally lacking in sentiment. “They nationalized French Impressionism and became America’s first truly national expression”, he said. The New Hope Group appealed to a sense of American identity as the country entered WWI. The Colony of artists were tied together more by the proximity of their studios to one another than by similarity of their painting styles. They adapted the painting techniques of the French Impressionists into a new, distinctly American style.

“My work is different, perhaps, from that of the general landscape painter in that I have a mass of detail in the mass. After all, one’s job is to get everything in and yet keep it all as a whole…like an orchestra…everything working in harmony to produce one feeling or emotion.”

Daniel Garber was considered the most original of the Pennsylvania artists. He adopted the dab-like brushstrokes of the French, but was uninterested in the notion of capturing fleeting moments in time. Because of his early training under Duveneck and Anschutz he remained interested in formal compositions throughout his career, and critics noted his two distinct styles: 1) Conventionally impressionistic, tightly painted with attention given to shape and detail. 2) More decorative and poetic. 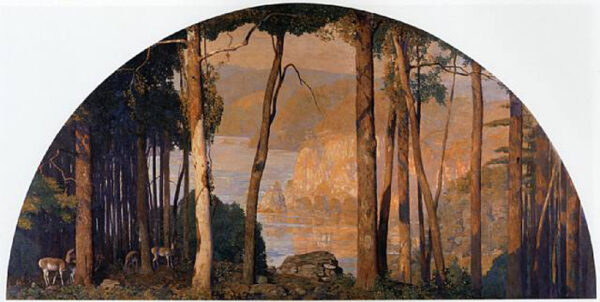 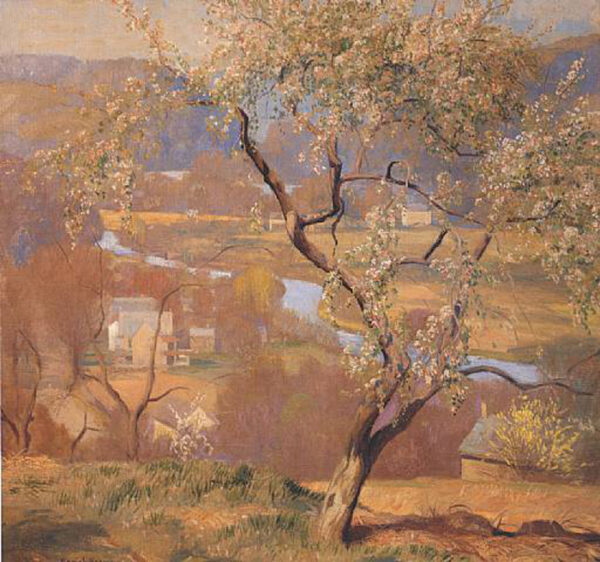 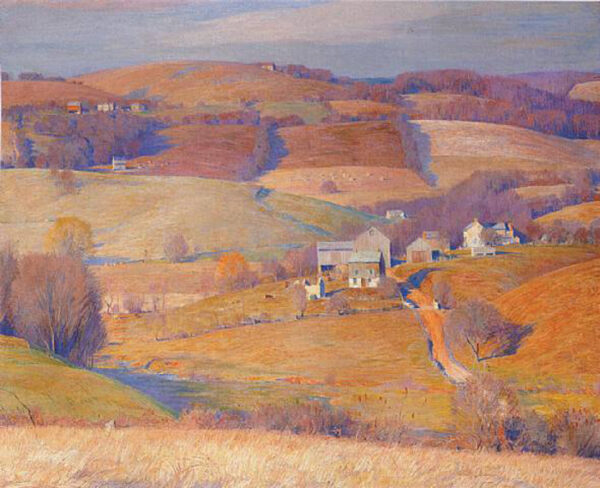 His landscapes favored blues, yellows and greens. He was continually searching for eternal and idealized notions of nature, rather than a photographic depiction of what he saw. His depiction of solitary trees within the landscape was a typical motif, in particular, complex trees whose twisted forms became an eloquent symbol of life.

Garber, although raised in a Mennonite home, was not particularly religious. He referred to himself as spiritual, in that he could see a divine presence in the world. Before 1930, he seldom depicted people in his work, however, after the Depression he became increasingly interested in showing people at work and play, exploring their hard work and its rewards that he found in the country and small towns of America. His shift to narrative paintings became one of his greatest challenges.

There is no written account of Garber’s painting process. Through correspondence there is an indication that he used oil sketches in his early years as preparation for his finished work and he gave great attention to his compositions, both before and after direct confrontation with the subject. He used photography to help compose his paintings and to explore form and composition without the use of color. He learned that from his former teacher, Thomas Anshutz. Like many artists today, Garber was reluctant to admit he used photography because of its controversy as a working tool. 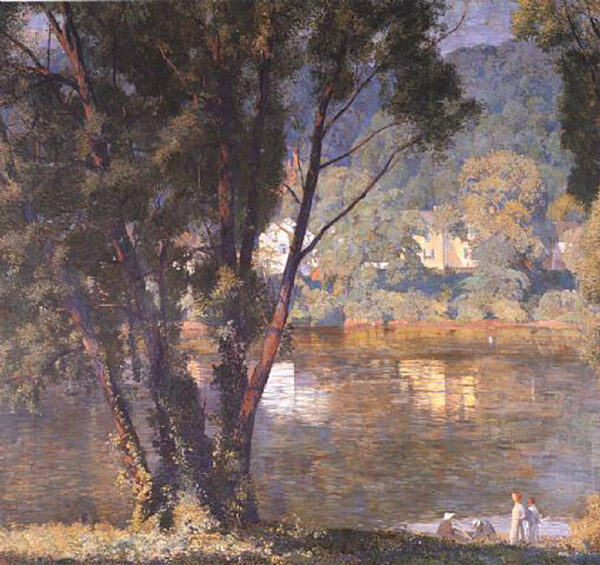 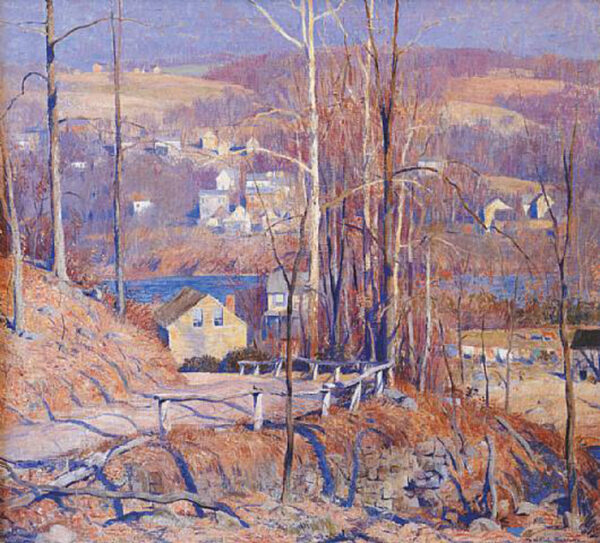 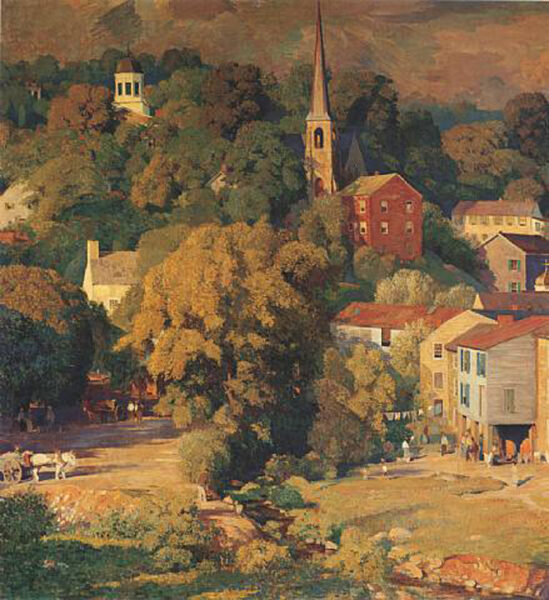 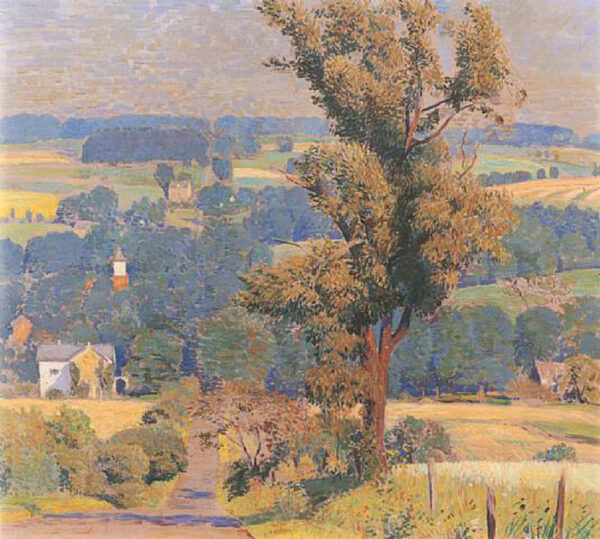 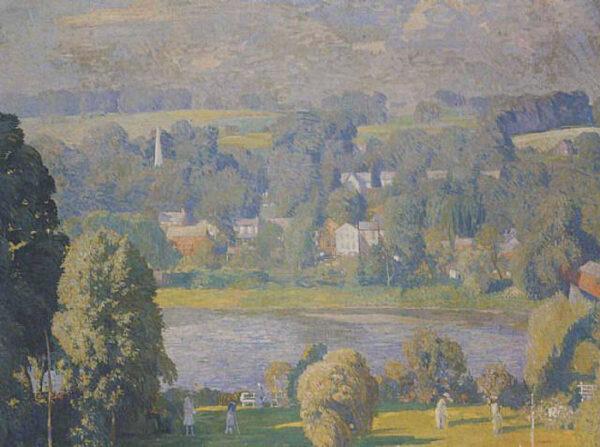 We have little indication as to how much of each canvas was actually painted en plein air. Typically, he would begin a painting outdoors but complete it in the studio, working on more than one landscape at a time. “The detailed surfaces of Garber’s canvases show that he took his time to create them. Slow, careful building up of the surface and color shows a more meditative working process typical of studio painters.” (Daniel Garber: Romantic Realist, Teacher’s Guide, 2007). In his plein air pursuits, Garber would drive his truck around Bucks County with canvases strapped to the sides, and was known to return repeatedly to the same place until he captured what was needed. He was very particular about his work; he would rework a painting as many times as necessary until he was satisfied with it.

“I am a very happy man! I am a simple man…I am enthusiastic about my painting but have few theories about it. In art, as in other things, you work out your problems as you go along, always trying to make your work better, and as your work grows, you grow…immensely. I’ve had a wonderful life.”

During his working life, Garber exhibited extensively. He sent out over 2500 canvases to over 750 exhibitions.

I am grateful for being exposed to Daniel Garber’s work while in Pennsylvania, and having a day to paint at his former house and studio with artist Kenn Backhaus. My eyes have been opened to this artist that I knew so little about. I can now say I am a fan. I hope you too enjoy his work.