Trains, like grain silos, hold a fascination for me. Like many young boys of my era, being a fireman, a policeman, a pilot, or a train “driver” were pretty appealing. I remember at one point, I definitely wanted to drive a train “when I grow up”. Like many things in a young boy’s life those desires eventually give way to something else, for me it was to become a fighter pilot…but the fascination with trains still remains with me to this day.

What is it about those monsters anyway? I guess it’s the noise, the size, the power, the machine…and that inexpressible something. 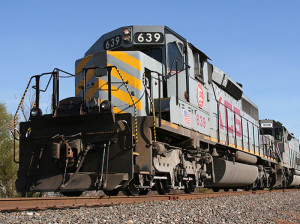 Destinies Paths is not a recent painting but I well remember painting it. I thought it worthwhile to write this article because I’ve learned from my students that they think everything goes smoothly for us professional artists when it comes to painting. 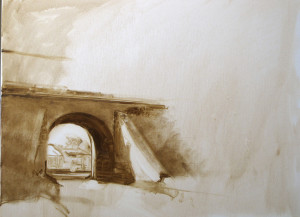 I thought I had a good handle on this painting after completing the monochromatic block-in and I expected the work to go forward smoothly. Well, not quite so fast there, Speedy! As it turned out, dissatisfaction followed dissatisfaction.

With no train passing by when a photo of the scene was taken, a scale model was used as reference, with the intention of applying the new KCS locomotive paint scheme. 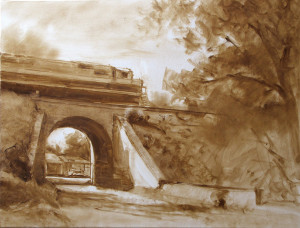 Using only raw umber (no white), monochromatic block-in is completed.

Almost from the beginning I felt that a palette of chromatic black (Gamblin), cadmium red, yellow ochre, cadmium yellow medium and lemon yellow would be sufficient to achieve the desired mood. Color swatches were made to test the theory. Chromatic black is a bluish black and would work well to grey color, I thought, and it would also mix well with the yellows in order to achieve a nice variety of greens.

As color was applied to the monochromatic, serious doubts arose as to the appropriateness of the palette, so ultramarine blue was added. Well, everything proceeded downhill from there. 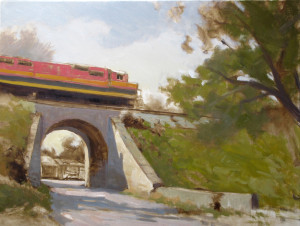 When problems arise such as these, what is one to do? The answer…always go back to basics: concept, composition, drawing, value, color, etc.

Originally, the problem appeared to be a wrong color choice, but in reality it was an unresolved concept. Yes, the values were set, establishing the mood, but what was the painting about…and where was the point of focus to be…on the train, on the tunnel and beyond, or somewhere else? These questions should really have been answered from the very beginning.

When the ultramarine blue was added, it immediately became evident it was a wrong choice. It was removed and I continued on with the original palette choice.

A natural focal point of the painting is the view through the small tunnel. A truck was added for interest. I never felt completely comfortable with that choice so it was removed. The house added nothing to the portrayal of a small rural town scene, so that too was soon changed to a filling station. It was then decided to move the story line and focus of the painting from background to foreground with the addition of three young friends. 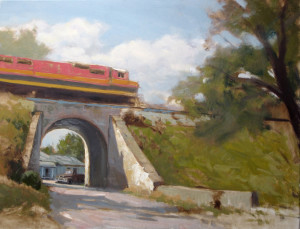 Painting with house and truck in background 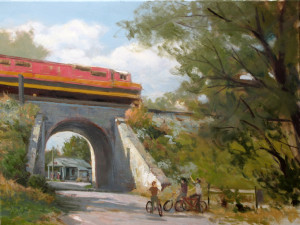 A human element is added to the painting but there is still no clear focal point.

With the focus changed, the new, more colorful color scheme of the KCS locomotive became way too important, so I reverted back to the older grey model. Just a lesson for you, folks…oftentimes when one thing is changed in a painting, it affects other things and then they need to be changed as well. It’s just another great reason to work out as many things as possible prior to applying paint to canvas.

Anyway, the changes greatly helped, and finally after many struggles, I signed my name to the painting. The painting now hangs in the corporate collection of Kansas City Southern. 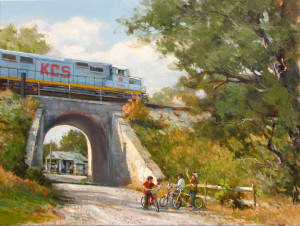 I chose Destinies Paths as the title because it best expresses the duel story line going on here.

Three young boys, all good buddies, with their destinies before them excitedly discuss what they’re going to be when they grow up.

“I want to drive a train, just like that man,” says the one in the white hat as he waves at the passing train. “Then I can go places.” The youngest one turns to his two friends and boldly declares, “I’m gonna be a farmer just like my Daddy and then I can drive big tractors and stuff.” With his imagination racing, the third lad blurts out, “I’m going to be an astronaut.”

The train’s on its way to Kansas City. What about the boys? Will they remain in this little community of two-hundred or will their destinies take them on paths yet unknown? Will their friendships endure or will they just be a nice memory? The train’s destination is fixed but the young boys are soon to make life changing decisions, setting them on paths of destiny.