Jean Baptiste Camille Corot (1796-1875) was one of the most important artists of his generation. 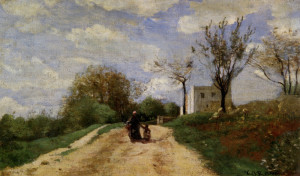 Historians liked the fact that Corot did so much of his paintings en plein air. The paintings were authentic. They captured the true landscape as it was, not a contrived idealism so reminiscent of Neoclassicism. The field studies were more richly textured and less refined, predating Impressionism. They appealed to the young artists who were ready for something new and were tired of the stranglehold academic art had over everything else. 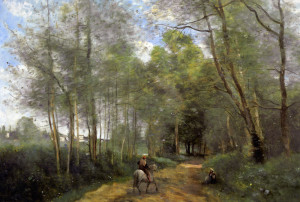 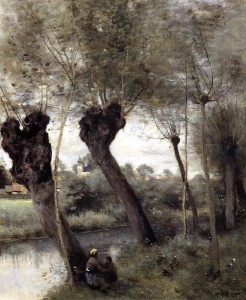 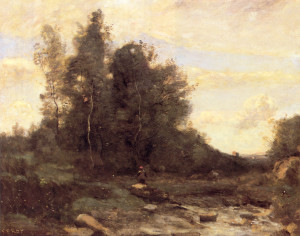 Although Corot never considered his outdoor work as anything other than studies for the important studio creations, nevertheless, they had a big influence on many of the future Impressionists.

By 1850, Corot was extremely popular. Now in his mid-fifties, he became less concerned with the exact depiction of things and more interested in what the motif meant to him, and what he could extract from it. His paintings were about to take on a considerably different look. They became less direct and more suggestive…some would say, more poetic.

Many of Corot’s early studies did not originally include figures, these were added later. He came to feel that a human element in his landscapes was essential. The figures were always represented in their leisure moments, never working, and were sometimes accompanied by farm animals. Their garments provided an opportunity to add brighter notes of color to the composition. 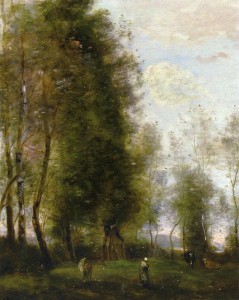 Although Corot sought to conscientiously capture a scene, he considered it extremely important not to lose sight of the feeling that had taken hold of him. So, while aiming for truth and accuracy, he also made sure to get into each painting that initial impression. “Let us trust our first impression,” he said.

Corot’s paintings are restrained in color. It was obviously his personal taste and vision that he saw the world in this way, but I also think it’s because of utmost importance to him were, drawing and values.

In his later works, he pretty much shed the Neoclassicism influence of his early works. However, I still sense a slight influence here. No, he didn’t paint Greek or Roman ruins in idyllic settings, but his paintings are perfectly balanced in pastoral type settings while exuding an enveloping calm in a beautifully harmonized limpid atmosphere.

Corot’s legacy is secure. He has influenced generations of artists including the Hudson River School, the Tonalists and the Impressionists. He became a household name in his day. He is truly one of the world’s great landscape painters.