An important art critic of the mid 1800s said of Charles-Francois Daubigny (Dough-ben-yeah) that there is “Nobody better than M. Daubigny who gives to a landscape its just accent and its true character. It is of him that one can say, ‘He is a realist.’ His painting is sincerity itself. A man must have lived in the closest intimacy with Nature to render in so striking a manner the most fugitive effects, the most daring harmonies.”  (Click images to enlarge) 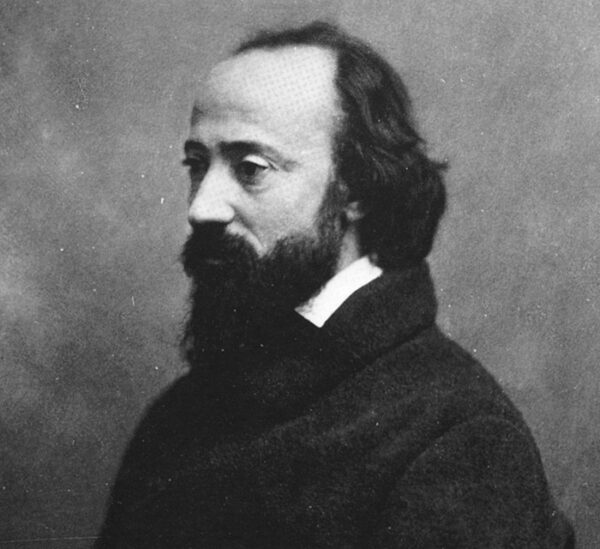 Born into an artistic environment in 1817 Paris, Charles-Francois’ father, Edme, was a landscape painter…good enough to exhibit his works in several Paris Salons. At age nine, Charles-Francois’ mother sent him to live with a caretaker in Valmondois, France, in the Val d’ Oise region. Apparently those first nine years at home were sufficient to set the course for his life. Daubigny wrote later in life that he knew how to paint before he could read.

At the age of 15, he returned to Paris. He was already providing for himself and contributing to the family needs through decorating snuff boxes, clock faces, jewelry boxes and fan bases. At the age of 17, he got a job at the Louvre restoring old paintings. Later he painted decorative panels at the Chateau of Versailles. The income enabled him to further his training under Pierre-Asthasie-Theodore Senties, an academic painter.

Daubigny pursued academic painting, reasoning that the training would help him gain acceptance from the Salon and the Paris art community…but that it would especially prepare him to win the prestigious Prix de Rome (an important scholarship awarded by the French Government that enabled the winning student to study in Rome for one year). Preparing for that, Daubigny went to Italy on his own in 1836 to study the old masters. Upon returning to Paris, he began painting historical and religious subjects. 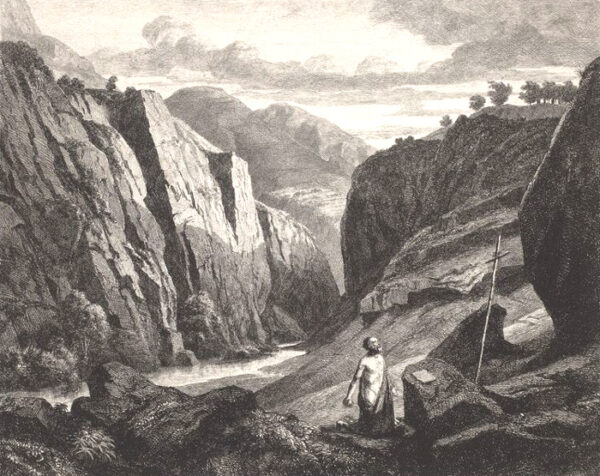 By 1840, he felt he was ready to compete for the coveted prize. He made it through all the preliminary rounds and was one of eight selected for the final. His failure to win was the stimulus he needed to change the course of his career.

Disappointed in his failure to win the Prix de Rome, Daubigny took to the fields and suburbs in an effort to free himself from all the influence and restrictions of the classic training he had received. His work was beginning to move in another direction anyway by this time, so his disappointing loss further sealed his future. One wonders, if he had won the Prix de Rome, how his work would differ from what he ultimately ended up doing.

His interest in landscape painting began extending beyond that which he had been taught. Rather than the romanticized classical approach to nature, Daubigny began to adapt a more revolutionary approach to painting the land derived from direct contact with Nature. 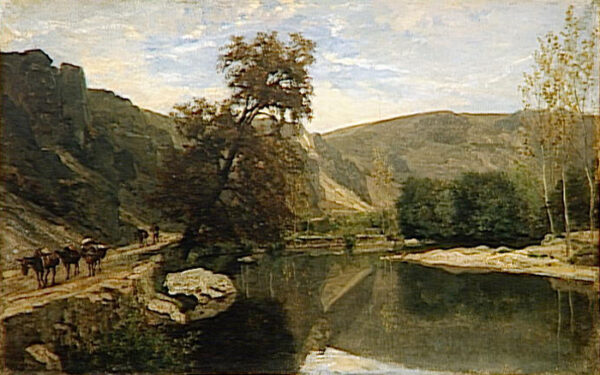 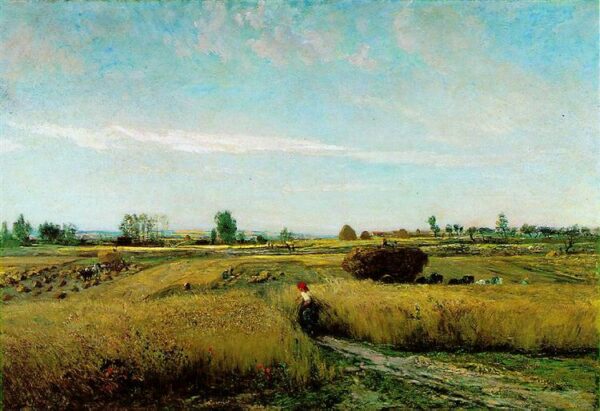 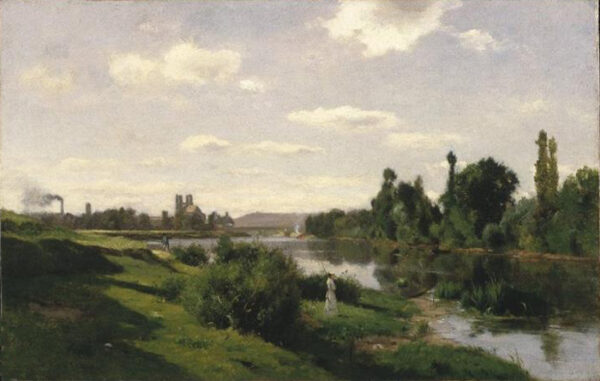 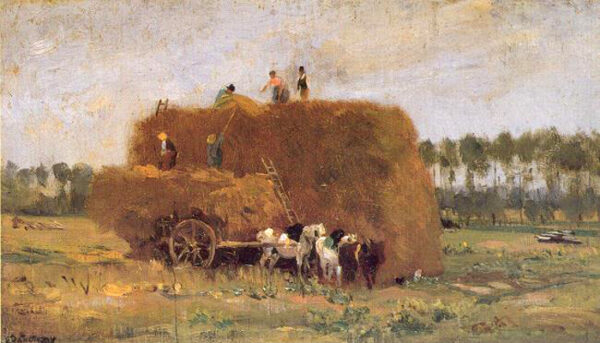 “He completely eschewed the Romantic’s pre-occupation with ‘dramatic expression in landscape.’ They’re running after something in Nature other than Nature’s self…investing it with their personal thought, an arbitrary creation…toying on the brink of convention.

“He wanted no part of convention. He rejected all together the Art of the learned. He felt art should have a wider, more general scope, that it should speak to the hearts of the poor as well as the man of leisure and study. It should be human. His means to this end was scrupulous fidelity, absolute respect for nature, perfect and sincere personal disinterestedness. ” 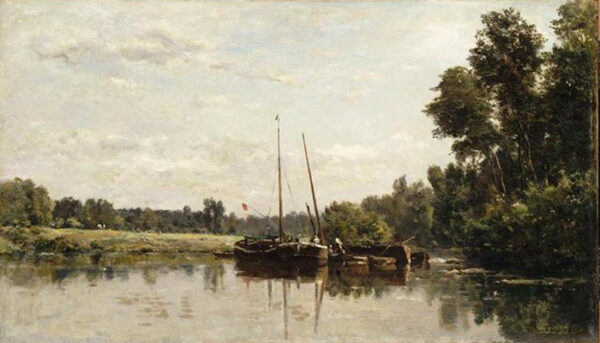 Change in the air

There was a revolutionary spirit in the air at this time…a desire for liberty and freedom from the many restrictions of the day. Daubigny’s new direction had a revolutionary aspect to it as well. Surprisingly, his newer style, based on direct observation of nature, incited much controversy, but it’s the very thing that became an inspirational force for a younger generation of artists…the Impressionists. 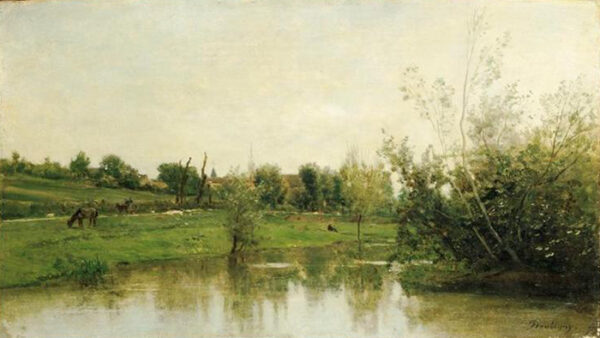 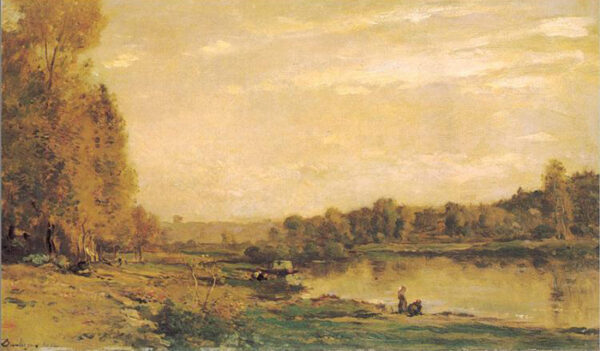 Daubigny’s desire to paint directly from nature was strongly influenced by his much older dear friend, Jean-Baptiste-Camille Corot, whom he met in 1852. Both were associated with the famous Barbizon school of painting, however Daubigny never actually lived in Barbizon. Daubigny owned much to Corot. He was always guided and supported by Corot. In his hours of depression, Corot would magically appear, just in time, to lift him up with good advice and praises.

In 1857, Daubigny purchased a small boat with a covered cabin which he named “The Botin.” Corot was made honorary Captain. From 1857, and for the next several years, Daubigny spent his summers on the water. 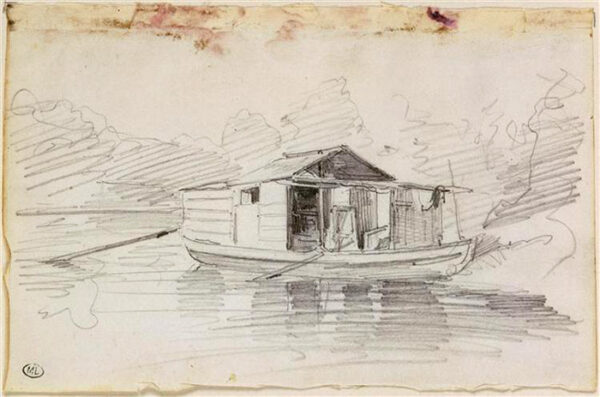 Despite critical disapproval of Daubigny’s work in the second half of the 1800s, he was elected to the Salon jury in 1865. He strongly supported the work of many emerging artists of the day including, Monet, Pissarro, Cezanne, Manet, Courbet, and Renoir, but when Pissarro and Cezanne were rejected, he resigned. In 1863, he had strongly urged these young artists to establish their own show…the Salon des Refuses. In 1868 and 1870, he was again elected as Salon juror, and again resigned (for the last time) when one of Monet’s submissions was rejected. 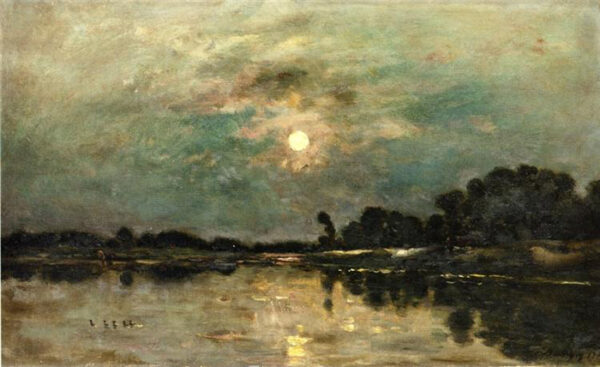 Charles-Francois Daubigny died of a heart attack in Paris in 1878 at the age of sixty-one.