I find it to be a curious fact that many artists of the past to whom I am attracted produced work that was strongly influenced by the Barbizon School and Camille Corot. American, Bruce Crane (1857-1937) was one of those. I first became aware of Crane’s work in 1994 while attending the Lyme Academy, in Old Lyme, CT. 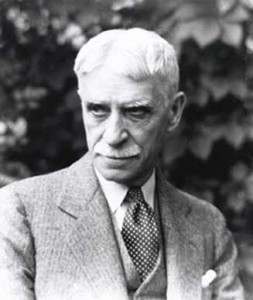 Crane is closely associated with what was called the Old Lyme Art Colony. It was founded by Henry Ward Ranger in 1899…sort of an American equivalent to the French Barbizon School. The gathering point of the Colony was the boarding house of Florence Griswold. Over time, the art colony grew to become the most famous in America, and the first to adopt Impressionism. It is believed 200 painters passed through the Colony over a 30 year period, including Childe Hassam, Willard Metcalf, Alden Weir, and John Twachtman. 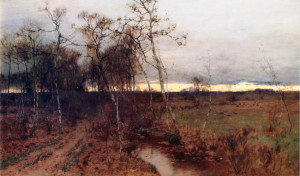 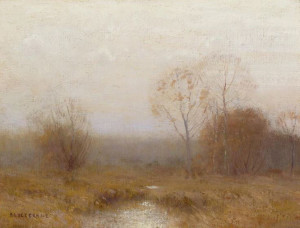 Around 1904, Crane became a regular fixture at the Colony, spending most summers in Old Lyme making quick pencil notations of the effects of light in addition to creating oil sketches…”thumb-box sketches”, he said. These sketches were taken back to his home in Bronxville, New York where larger works were created, primarily from mental images of the summer experience. In an essay by Charles Teaze Clark titled, “The Touch of Man: The Landscapes of Bruce Crane”, the essentials of Crane’s technique are explained:

“The object of studying and sketching out of doors is to fill the memory with facts. It should therefore be exact and conscientious. But in the studio the artist should use his knowledge freely. For my part, I seldom look at a sketch when about to paint a picture, I do not need to do so except rarely, when I am in doubt about some particular point.” 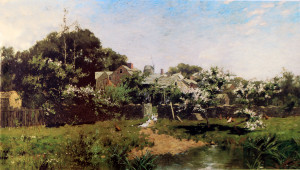 A good amount of direction and influence came from two artists with whom Crane studied at various points in his formative years: Jean Charles Cazin and Alexander Helwig Wyant. Cazin (1846-1901) was largely self-taught. He learned to simplify abstract shapes within a composition and stressed the importance of color memory training for the rendering of solar, lunar, and atmospheric effects…those beautiful, fugitive moments found in nature. Wyant (1836-1892), on the other hand was influenced by European naturalism and principles related to the French Barbizon group. 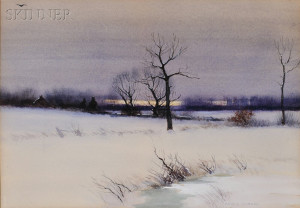 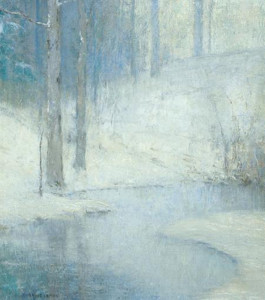 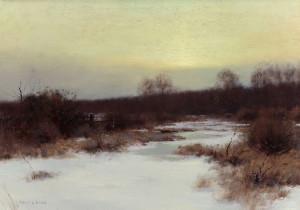 As Crane’s mature style developed he realized that the objective approach to the landscape favored by the Impressionists did not suit his temperament. He instead related more to a subjective view, as evidenced by the Barbizon painters, such as Corot. The way in which Crane visualized the landscape with his mind was more important to him than depicting the motif as he perceived it with the eyes.

As Mary Muir states in her essay, “Bruce Crane: Tonal Impressionist” , “More than depicting literal transcriptions of perceived visual truth, Tonalists were concerned with conceptual truth based on a personal response to a familiar nature, preferably that of one’s native land.”

“Not infrequently, Tonalists sought to suggest the grey mists of morning, the lavender blues of twilight, or the luminous softness of a dying sun…quiet moments of nature that aroused the artist’s creative sensibilities and offered the greatest potential for realizing his aesthetic aims.”

Tonalism presents significant challenges for the artist. It is one thing to indicate the extreme contrasts of a bright sunny day, but quite another thing to maintain a harmonious control of values and color when depicting fog or mist. These situations require a very limited range of values with only the most subtle gradations of color. Corot led the way for many who followed…not only Cazin, Wyant, and Crane, but also George Inness, Henry Ward Ranger, John Francis Murphy, and many others. 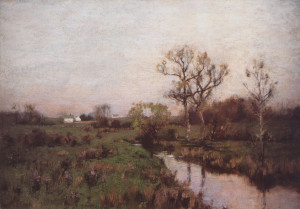 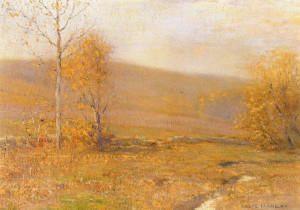 Mary Muir continues, “Tonalists believed every subject had a distinctive key nearest to the local color that was peculiar to a time and place and that would be altered with the passing of each hour. The artist’s genius was revealed by the effectiveness with which he selected and related his color values. Crane’s adjustment to a key lower than that found in nature represents a common tendency of the Tonalist, particularly when compared to the considerably higher key favored by the Impressionists.”

In his day, it is reported that Bruce Crane’s paintings were in great demand among museums and private collectors. Few painters of his time received more numerous or prestigious awards in juried exhibitions than Bruce Crane. He died at the age of 80 in Bronxville, New York, after breaking both hips in a fall two years earlier.