Aldro Thompson Hibbard just may be America’s greatest snow painter…if not the greatest, certainly one of the very best. His style is very distinctive and easily recognizable. Many artists

have been influenced by his work, including Emile Gruppe, Paul Strisik, and Tom Nicholas. This influence is most easily seen in the work of Gruppe.

To think of Hibbard as merely a painter of snow… (Oh! But what a painter he was!)… would be a mistake. He was basically a landscape painter, but he also excelled at figurative work. He studied under Joseph DeCamp, Edmund Tarbell, and Frank Benson, but the thought of doing portraits for a living just didn’t sit well with this athletic, love of the outdoors kind of guy. 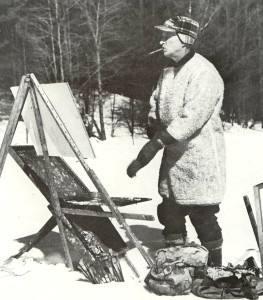 Hibbard was born in 1886 in Falmouth, MA and was a longtime, beloved resident of Rockport, MA until his death in 1972. He was a person of seemingly endless energy. He was charismatic and gregarious, a vigorous leader and organizer…a man of action. He must have thrived midst chaos, for he not only had a successful art career but was one of the founders of the Rockport Art Association, and it’s President for 17 years. He was also actively involved in Rockport community events, and founded the Rockport Summer School of Drawing and Painting which he operated for 30 years. Being athletic and a lover of baseball, he helped form a Rockport baseball team. He managed and/or played for that team for almost 40 years. I just can’t see Aldro sitting around wondering what to do next. 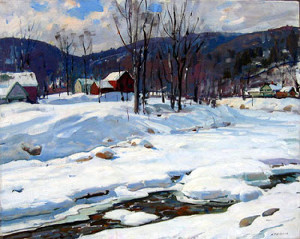 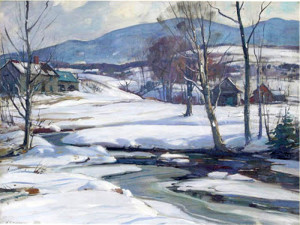 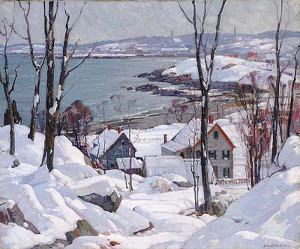 In sketching outdoors, first set the essentials that mark the time of day. Details can come later. 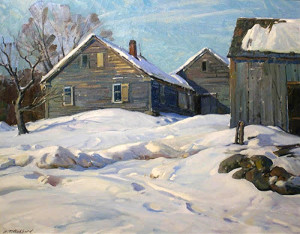 In a 1996 essay by Thomas Davies, he speaks of Hibbard’s forte as being outdoors. That’s where most of his life has been spent, by choice, he writes. That’s where he received the stimulation and excitement of the unexpected. “Nature won’t come to your studio,” Hibbard said, “you must go to her.”

Deceased artist, Paul Strisik, a fine artist in his own right, and a former Rockport resident said, “Art to Hibbard was a serious business. He was an artist who understood his responsibilities and took them seriously, whether as a painter depicting the scenes he loved so much, as an administrator and leader in the Rockport Art Association and North Shore Arts Association (in Gloucester), or as a citizen int he town. He was a person that understood what he had to do and simply went ahead and did it.”

All seem to agree, Hibbard was outgoing and social outside of painting, but totally private as a painter. “As a painter he was a loner, as part of society, a joiner and a doer,” Strisik said. 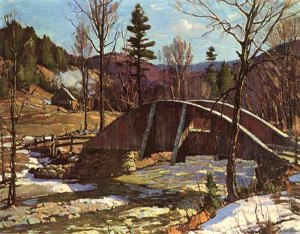 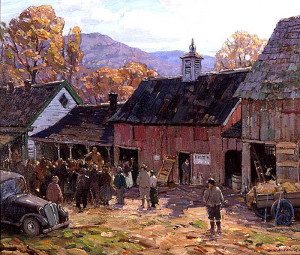 Hibbard was strongly drawn to the paintings of Claude Monet, Willard Metcalf, and Childe Hassam. Monet’s work just made sense to him. He liked the color separation and the effects Monet achieved. Aldro eventually had to abandon the impressionistic technique for a broader method. The broken color style was just not suitable for the cold Vermont winters. 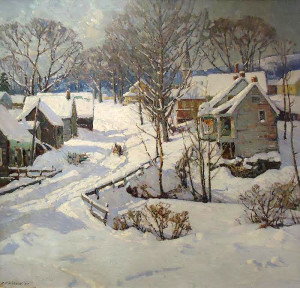 Hibbard must have been a tough, resilient guy. It has even been suggested that it was a macho thing for him to be seen as an outdoor painter…being rugged and enduring all kinds of weather in pursuit of his profession. But, we’re not just concentrating on Hibbard’s mastery of the winter landscape. He also excelled in depicting other seasons as well, particularly autumn. Tom Nicholas N.A. says that Hibbard “painted anatomically, structurally. One could sense the anatomy of the landscape.” 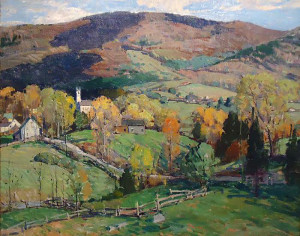 Focus on a dominant part of your subject, whether sky, distance, middle distance, or foreground. 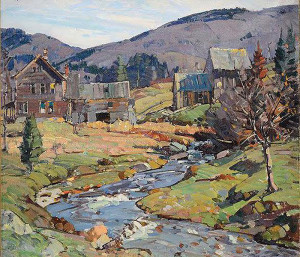 I found an interesting interview, in my extensive art files, that Hibbard had with American Artist magazine back in June 1940. Here are some of his comments. The questions are mine and I also changed his answers to the first person and tidied them up a bit. I’ve been a fan of his work for some time. I’m drawn to his strong, clear compositions. Mainly however, it’s that incredible feeling of absolute confidence, boldness, and passion that is so evident in every brushstroke that I find so appealing. There is nothing wishy-washy about Aldro Hibbard’s paintings…nor in his personal life either, I suspect. 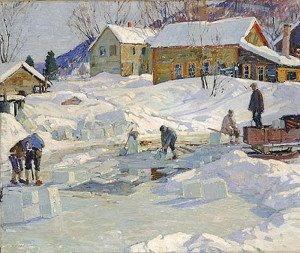 What difficulties do you incur when painting outdoors in the winter? What is your working procedure?   Having previously visited the spot and composed the picture mentally and memorized the impression it made on me as well as possible, I set up the easel… and during the first day make a layout on a large canvas. This is painted very thinly with plenty of turpentine, almost a watercolor technique with colors that approximate the probable final scheme.

If the desired effect is a fleeting one – it usually is – and I cannot hope to paint it directly on the large canvas, I have several small canvases ready for very rapid sketches when the sun reaches its appointed place. I may make several such sketches at different times before I’m ready to finish the large canvas. This may be done in the studio, though my general practice is to complete the pictures on the spot.
Often, I’ll paint on a picture outdoors all day, spending the morning and midday on layout or underlay and waiting for the late afternoon to make the final color adjustments. Spending too long on one painting under rapidly changing light is dangerous. It is much better when the effect is transitory, recording impressions in small sketches and relying upon them for the final painting.

Glare, reflected from the snow upon the canvas. A piece of black cloth spread out under the easel and the feet of the painter is some help, but even so the picture has to be painted on the palette. Unless the artist can judge the right color before it goes onto the canvas, he is lost.

Any advice for students? What colors are found on your palette?   I seldom have more than eight or ten color on it, but they are not always the same colors. What pigments go on the palette today depend upon the subject to be painted. Tomorrow’s picture may call for different blues, reds and yellows. I often mix in advance hues and values that I know I’ll need. The less mixing on the spot the better. Everything has to be planned for speed when at work in the field.

There are fortunately many methods of painting, yet the average student is in search of one with a short cut and a fool-proof recipe whereby he cannot go wrong. To my way of thinking the fundamentals are first in order, then some guidance as to their usage follows. The rest, needless to say, is quite personal and a lifetime job. One should experiment, thereby possibly offering something new and valuable to the art world. It is an open field and what we make it.

For those that wish to try plein air painting, what do you recommend?   Avoid using nature photographically. It’s necessary to make many adjustments when painting out of doors, that’s what really makes painting interesting and not ordinary. On the other hand, be a close student of nature at all times. Make mental notes, written notes, keep track of it. It is all valuable reference. Compose on different-sized areas. Leave a reserve for the darkest darks and lightest lights. Try all mediums. Some days, just draw. Don’t be afraid to use pigment. Lights demand it. Get color and vibrate it without mixing it too much. Beware of too much studio landscape painting. Direct contact gives you the rare things because accidental things are happening all the time outdoors. Be on the lookout for them and grab them. Notes taken on the spot are valuable and should not be tampered with. In sketching outdoors, get the essentials which denote the morning, afternoon or evening – whatever the time of day. Get that whether or not you have time for details.

Thanks Aldro for an interesting interview. I heard you believe in rotary painting, what is that? Rotary painting is jumping all over the canvas, adjusting practically all the time. I try to avoid laboring too much on any one spot when parts of the canvas are not covered at all. Rotary motion means consistent flavor all over. 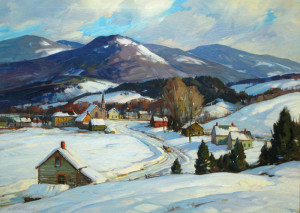 Any final thoughts?   Avoid excessive use of juice (turps or varnish). It floats the paint on and dries flat and uninteresting. Use a lot of pigment. Get vibration. A rough canvas helps. Strength in a picture comes from values. Color intensifies it. Paint with speed. Use up your nervous energy. A morning’s painting should wear you out.

*If you want intense color, go out before nine and after three, not at midday when the sun is bleaching everything.

*Too much white weakens your sketch. Get color and vibrate it, without over mixing.

*Too high a key in a picture often sacrifices color and strength, and the painting becomes diluted. We must lower nature’s key, which many times is quite beyond the capacity of pigments.

I would like to thank Stapleton Kearns for providing some of the images for this article. Sorry that I could not provide titles and sizes for all the paintings.

Stapleton is a pretty terrific artist and is a huge fan of Aldro Hibbard’s work, in fact you will discern Hibbard’s influence in Kearns’ paintings. Stape was also president of the Rockport Art Association for several years…and if you haven’t read his blog…all I can say is there is a wealth of art knowledge available at your fingertips.  It was there that I discovered this very nice piece that he wrote about Hibbard. Here’s the link. To see some of Stapleton’s work, click HERE.

I also want to give credit to Stapleton for influencing the tone and mission of my blog, and in coming weeks I will be posting an interview I’ve had with him. You can bet, it’s going to be good.