There’s a perception out there that for us professional artists, painting comes fairly easy…after all, we were born with the gift. Well that idea, at least for me, is very far from the truth. In fact, painting seems to become more difficult, maybe that’s because taste level, knowledge, and expectations exceed ability.

The painting featured here is a case in point. Although I am very pleased with the end result, nothing about it went smoothly…nothing…from beginning to end.

The idea for this work actually began as one of many “Italian scene” painting ideas submitted to a client for a possible commission. I later selected from the submitted group the color study shown here as inspiration for a larger studio work. Before doing so however, I inverted the image. It turned out to be a good decision. The study was done using white, ultramarine blue, alizarin crimson, and cadmium yellow pale. The subject of the painting is a sunlit Italian coastal scene set in the month of May. Summer has not arrived, the foliage is still rich and lush. 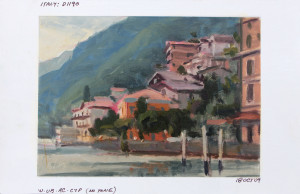 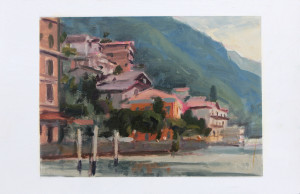 Before beginning the studio painting, I experimented with other color choices. Ultramarine blue was replaced with Prussian blue and cadmium yellow pale with lemon yellow. A color wheel was created. Being able to create a wide variety of interesting greens was the starting point for palette selection. 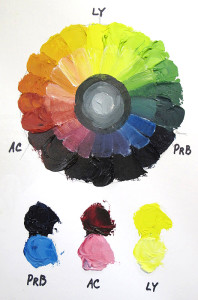 I have used a limited palette of just the primary colors since the mid-eighties, so that is always the starting point. You may notice from the color wheel, shown above, that the center of the wheel contains three values of gray. The darkest ring contains the three primaries mixed together, and the other two values have white added. I discovered this palette yields an almost pure neutral.

Additionally, for this painting, some extra yellows were added: yellow ochre, and cadmium yellow medium. As you can see, all of the yellows have been mixed with Prussian blue. Cadmium yellow light was also tried but was rejected because of its closeness to lemon yellow. 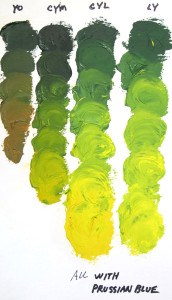 Testing the variety of greens possible.

This is only the second time I’ve used Prussian blue. The color was first discovered in 1704 and widely used, but there has also been considerable controversy as to its permanence. Winsor and Newton gives it an “A” rating (Permanent), equal to most of their cadmium colors…and more permanent than the popular alizarin crimson…so I am comfortable with that. Phthalocyanine blue would be a suitable replacement. Beware however, Prussian blue and phalo blue are very powerful. Both are greenish blues and have tremendous tinting strength. Just a dab goes a long way.

In selecting Prussian blue, my thinking was it would be a more suitable color for capturing the tree covered hills descending toward Lake Como. By adding additional yellows it would also be possible to mix a greater variety of greens. Having used Prussian blue one other time, it had worked well for the color charts, but on this larger painting with so much green it was difficult to control. Ultimately, I regret selecting the color. It’s just too strong for my color sense. Don’t suspect I’ll be using it again. 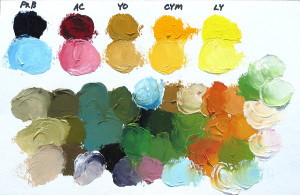 Color is an important part of painting. Some artists believe it is the most important part. I don’t agree. The reason for my position is that masterful paintings have been achieved using no color, just black and white. Also, it’s value that establishes the mood of a painting, not color. Color only enhances it.

Having instructed many students over the years in the basics of creating a solid painting, I have stressed the importance of having a clear concept, a well organized composition, accurate drawing, a simple value structure, harmonious color, technical excellence…and even appropriate framing. All these elements are important, but concept needs to reign supreme. What do I mean by concept? It is what the artist chooses to communicate through the painting…and every one of the basic building blocks mentioned above, need to support that concept. It’s important to keep your original idea in mind throughout the painting process. When working from photos particularly, it is very easy to lose sight of the original idea and allow the photo to determine the ultimate appearance of the painting. I continually have this problem whether working from photos or not. I need to constantly remind myself to slow down and think through what is most important before ever putting brush to canvas.

Once all the work above was completed, a 32″ x 46″ canvas was selected. Normally, on large canvases, I begin with a full monochromatic value block-in. This time I decided to jump right in with color on the white canvas…another mistake. 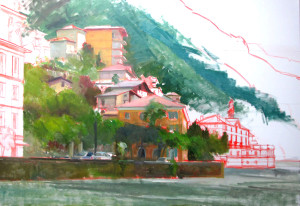 Partial block-in showing some of the preliminary drawing

As the painting proceeded, it was necessary to redesign some of the architecture, as well as parts of the retaining wall. Since the original design was inverted, I felt the water needed additional consideration. With no suitable reference for what I wanted to achieve, the water was painted from imagination. 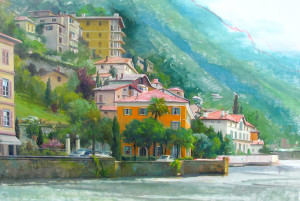 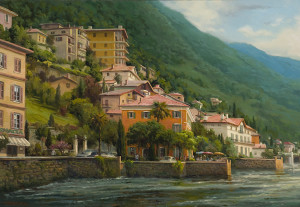 Nothing about this painting was easy. The palette selection presented difficulties throughout that had to be overcome. Because of the intensity of the colors selected, almost  all paint mixtures had to be neutralized. Also, the drawing was involved, complex, and time consuming. Accurate perspective and proportion were foremost in mind. There was a lot of drawing, and redrawing until everything occupied its proper space. Even the framing created a whole set of issues. A custom made gold leaf frame was ordered from an out-of-state frame builder, but when it finally arrive it was the wrong size. Challenge upon frustrating challenge…but hey, everything eventually worked out. I’m pleased with the result. Response to the work has been amazing…and that, dear friends, makes the challenge and anxious moments all worthwhile.

This painting is available for purchase through Southwest Gallery in Dallas. Here’s the link.