In his 1889 book, “How to judge of a picture”, John C. Van Dyke thoroughly describes how to properly assess a painting. I know, the title is weird, particularly with that preposition “of” stuck in there, but, that’s the correct title.

John Charles Van Dyke (1861-1931) was an American art historian and critic. He was a professor of art history at Rutgers College, and was also elected to the National Institute of Arts and Letters in 1908. He authored two series of books related to art, the first were critical guide books, the second covered the history of art in America.

The purpose of this blog, and others to follow, is to share with you some helpful guidelines, offered by Mr. Van Dyke,  that will help us critique our own work and the work of others. We will not agree with everything, but all his comments are worth serious consideration before rejecting them out of hand. Remember, this was written in the 1880’s. The ability to effectively critique art, or anything else for that matter, requires a significant amount of factual knowledge and understanding, otherwise what is offered as a critique is really nothing more than an emotional reaction. Mr. Van Dyke is helping us gain that knowledge and understanding.

“Now we come to the consideration of another feature of painting, intimately connected with light and shade, color, and aerial perspective, and vitally important to every picture, be it in high colors, in monotone, or simply in black and white; namely, values. Definitions of the term vary in meaning because value signifies not one, but several things. The word generally understood means, in brief, the quantity of light or dark contained in a tone. The modern artists do not consider this the precise, the only meaning of value, especially in regard to color. To them it has a more subtle significance in the difference of pitch, not between a green and a red, a yellow and a blue, a black and a white, but between a yellow and a yellow, a red and a red, a white and a white. If a white handkerchief be thrown on the snow there will be some difference, slight though it may be between the two whites. One will have more value than the other, and only by the emphasis of the difference could the effect be drawn or painted.” 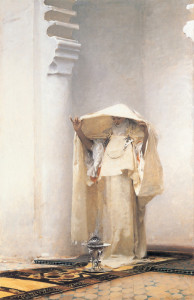 Consider value as the quantity of light or dark contained in a tone arising from any cause whatever. 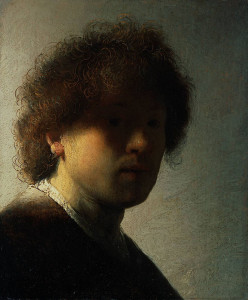 “The value of a tone is estimated by its worth or importance as related to other tones, being either high or low, weak or strong. When tones and shades are placed in a picture precisely as they appear in nature, the picture is technically spoken of as ‘good’ or ‘true’ in values; when the artist fails to produce them as they naturally appear…fails to produce just relationships…his picture is called ‘weak’ in values; and when he chooses to exaggerate them for purposes of artistic effect, they are sometimes spoken of as ‘strong’ in values. Rembrandt and Goya, are good examples of the latter. Of pictures ‘true’ or ‘good’ in values, an illustration may be taken from almost any good modern painter, say, Carolus-Duran, John Singer Sargent, William Merritt Chase, Carroll Beckwith, or George Inness.” 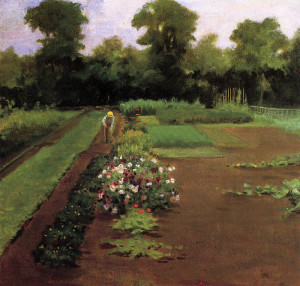 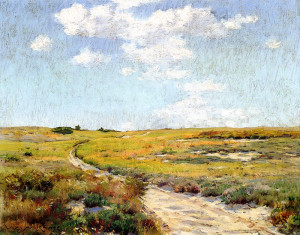 “Just precisely how you may decide if the values of a picture be good or bad, weak or strong, I can but imperfectly tell you. I have tried to point out to you what they are, and for the rest you must look at pictures and study nature. Possibly you think you know nature, but you will never know how deep as a well and wide as a barn door is your ignorance of her until you study art. Generally speaking, false values in a picture may be noted not only by the lack of a difference in the pitch of similar colors, but by the absence of proper gradation and atmospheric effect, and by the unreal appearance of the whole piece. Trees at varying distances will appear of the same value; people in a throng on the street will all be of equal prominence; the flesh color on the throat will be as high-keyed as that on the chin; the policemen in the distance will be small replicas of the ones in the foreground. Everything will be flat, the planes of the picture will be lost, the color gradations destroyed.” 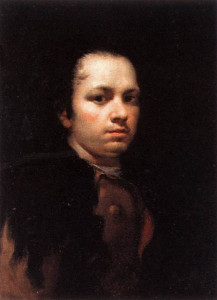 “If you will look at any of the landscapes of Corot, Rousseau, or Diaz, and will try to find something more in them than the ‘splash’ and quantity of paint, you will see that the trees have not only a difference of local color in themselves, but also in relations to the other trees; that the houses, the clouds and the hills hold a similar relation to each other; and that in the water, the grass, the roads, the small figures in the landscape there is a proper recognition of their different values.”