describes how to properly assess a painting. I know, the title is weird, particularly with that preposition “of” stuck in there, but, that’s the correct title. John Charles Van Dyke (1861-1931) was an American art historian and critic. He was a professor of art history at Rutgers College, and was also elected to the National Institute of Arts and Letters in 1908. He authored two series of books related to art, the first were critical guide books, the second covered the history of art in America. The purpose of this blog, and others to follow, is to share with you some helpful guidelines, offered by Mr. Van Dyke,  that will help us critique our own work and the work of others. We will not agree with everything, but all his comments are worth serious consideration before rejecting them out of hand. Remember, this was written in the 1880’s. The ability to effectively critique art, or anything else for that matter, requires a significant amount of factual knowledge and understanding, otherwise what is offered as a critique is really nothing more than an emotional reaction. Mr. Van Dyke is helping us gain that knowledge and understanding.

“We have arrived at the conclusion that painting is a means of conveying to the world an artist’s ideas, impressions, or emotions, precisely as poetry is the poet’s method of revealing to mankind his conceptions and fancies. Be patient with my theories a little longer, for I must try to explain to you the kind of ideas fitted for representation in art. This is necessary, or you will become possessed of the notion that the idea in art is synonymous with the idea in literature; and this is an error into which you must not fall.” 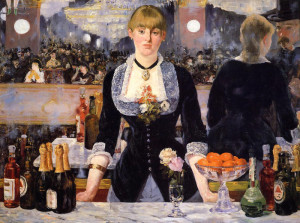 “When one talks to the artist about ideas in pictures they immediately think you mean something literary – something that shall tell a story and hold you by the strength of the plot. This misconception is not with the painters alone, but, in fact, with the great majority of people. They seem to draw no line of distinction between the art of painting and the art of novel-writing, erroneously thinking the former is but another way of producing the latter. The English and American people in particular, favor the “tell-a-story” art, and a sentimental Sunday-school tale in paint is the notion of a picture entertained by a large majority of them. It is quite impossible to make people understand that there is such a thing as a “literary” conception, or a conception fitted for literature, and such a thing as a “pictorial” conception, or a conception fitted for pictures, The artist rambles out of his sphere to usurp the place of the novelist by telling a story, and the novelist goes out of his sphere to paint a picture with words.” 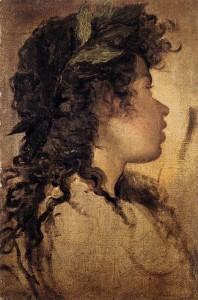 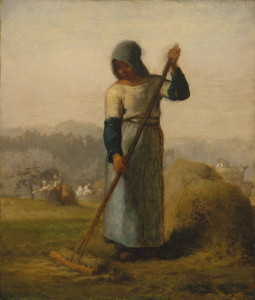 Mr. Van Dyke goes on to explain what he means by pictorial conception. “When an idea is pictorial, it requires to be told with line, shadow, or color, not with words. Take the face of a friend that you know well, and can you give to a stranger any word-description of that friend’s face whereby the stranger could recognize it? Certainly not; but you bethink you of a photograph or portrait, it is brought, and the eye immediately conceives the image which the mind through the sense of hearing alone could not grasp. The idea again is pictorial.”

“The object of all expressive art is to convey, by a symbolic language to people’s minds through their eyes, conceptions, impressions, ideas, or emotions of pictorial beauty.”

“From this we may learn that there are certain features of life that must be described to the eye, and other features that must be told to the ear. Those features of which the eye takes chief cognizance, such as form, color, light, belong strictly to painting; while those which relate to abstract life, such as thought, speech, mood, or motive, belong to literature. External appearance can be much better pictured than described, and to do this is the painter’s particular province; but if he goes beyond this, and tries to tell us what his characters have been doing, what they are thinking about, or what they are going to do, he oversteps the boundary of his art. He attempts something that can be better told in literature. The painter can portray what his characters are doing at the moment, and suggest what they anticipate doing the next moment. He may also suggest what they are thinking about at the present time, but this power of suggestion is limited in scope.” 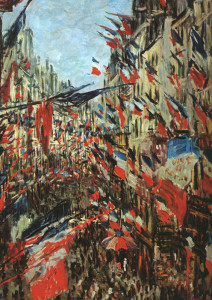 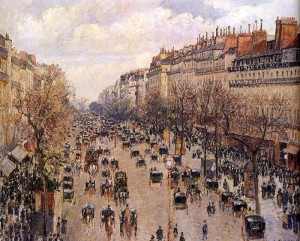 In selecting titles for paintings, I like to choose one that gently suggests the paintings motivation. Van Dyke, if I understand him correctly, does not like that idea. “It’s an erroneous idea to think that if “the title is a little more definite, perhaps you would understand the painting better; but, as I have observed before, a painter should not paint his meaning in the catalogue with the letters of the alphabet. The meaning should be in the picture, not the title.”

“To further exemplify the limitations of painting…it cannot adequately tell a story, recite an epic, or depict a drama, but must confine itself to giving a view of the appearance of things at the living moment. In other words, it must be picturesque and cannot effectively be literatesque. With this understanding, then, it is the painter’s province to set forth only pictorial conceptions and impressions.” 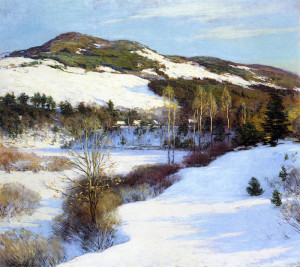 “An artist has the ability to sense and feel, and place upon canvas what he alone sees. He becomes an interpreter of hidden beauty, a revealer of unknown truths, a translator of an unwritten language. When he does that, we come to look upon him as the possessor of what is called ‘poetic feeling’. There is something of the poet in him; he sees farther, deeper, and truer than other men; and, not content with external form, he strives to bring forth the spirit of nature.”

“The difference between artists that create ordinary productions and those that produce masterpieces lies mainly in this, that the later convey great conceptions clearly outlined, while the former only suggest ideas of less importance. The highest art of all, then, is that which consists in the expression of one grand idea with such force that every other thing is forgotten in its contemplation. This is the superlative of art, and this is the sublime.”