I thought this article would be easy to write…that it would just flow out of me. In reality its been quite the opposite. For three weeks I’ve been contemplating how best to faithfully express my love for my friend and mentor of 55 years. Putting into words all this man has meant to me, I’ve come to the conclusion it can’t be done, so I’ll just do what I can, insufficient as it is.

Except for a couple of examples, I’m only showing some of Ed’s paintings, not the stacks of brochures, packaging, logos, annual reports, street signage, menu boards etc. that he designed over the years. As to his paintings, most could be measured in feet, not inches. His early work was done in acrylic, his later work with alkyds. His versatility is obvious. He was unrestrained; he just created. (Click images to enlarge) 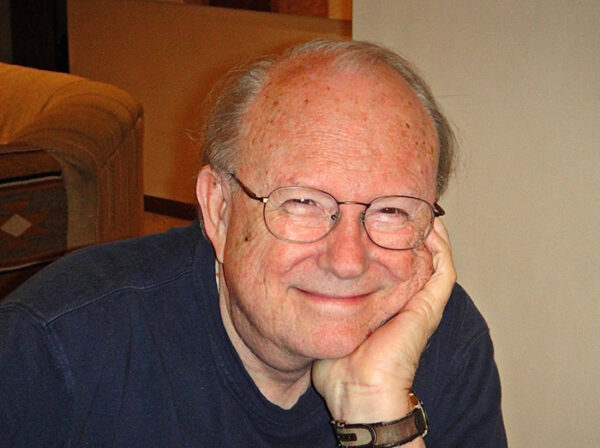 Ed Pointer, who died to this life on 24 May at the age of 88, so influenced me with his wisdom and creativity that the direction of my life changed forever.

I first met him in April 1966 while a Junior at Wichita State University. I had accepted a job with Richard TenEyck Associates, a nationally recognized industrial design firm. Ed was one of select group of brilliant designers, illustrators, and draftsmen. My job was to keep all the job files organized and help the artists with whatever they needed to make their job easier. 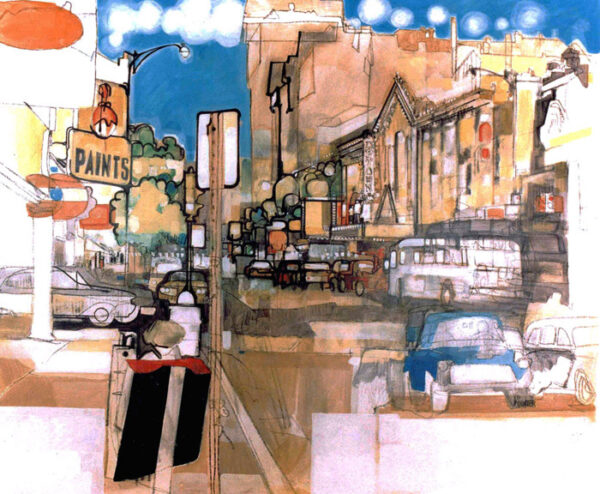 “Hillside and Douglas” – 5′ x 6″ – Acrylic  (This is one of the first actual paintings I saw of Ed’s. The reproduction doesn’t come close to its magnificence. Its sheer size demanded your attention. This important Wichita, KS intersection I knew well) 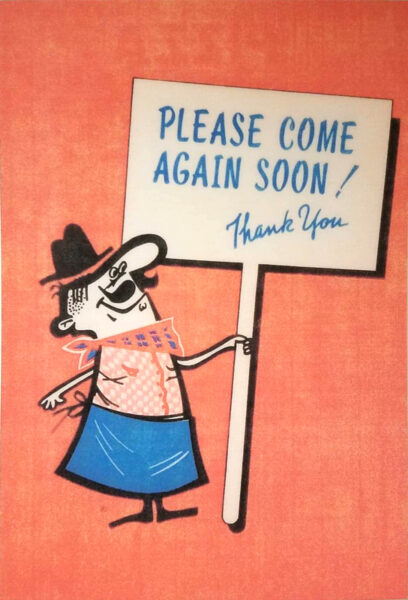 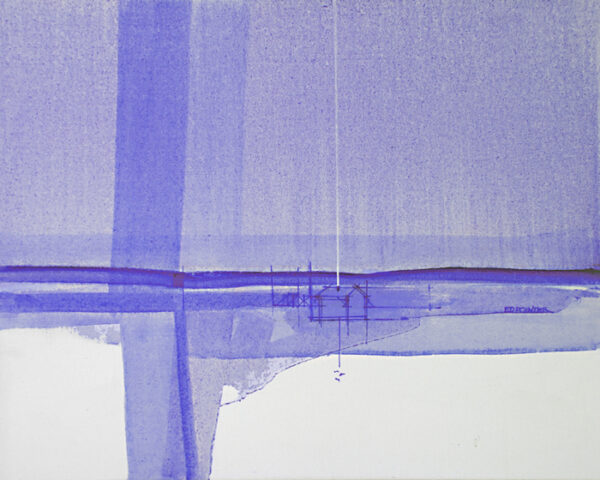 Ed was a kindhearted guy, the first to entrust me with a drawing assignment. It was a really big deal at the time and sealed a long relationship. Upon first meeting him, I liked him immediately. Not only was he creative and versatile but also extremely funny. His multiple impersonations helped create a lighthearted, wonderful creative atmosphere. What I saw and admired in Ed was reciprocated in that he saw something he admired in me. 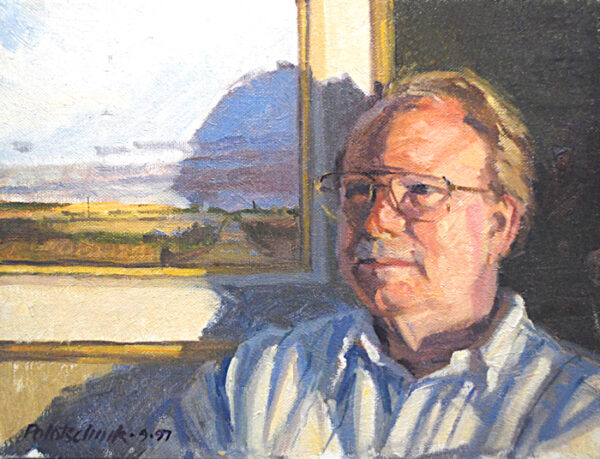 We took turns painting one another in 1997. This is the one I did of him. Below is the one he did of me. 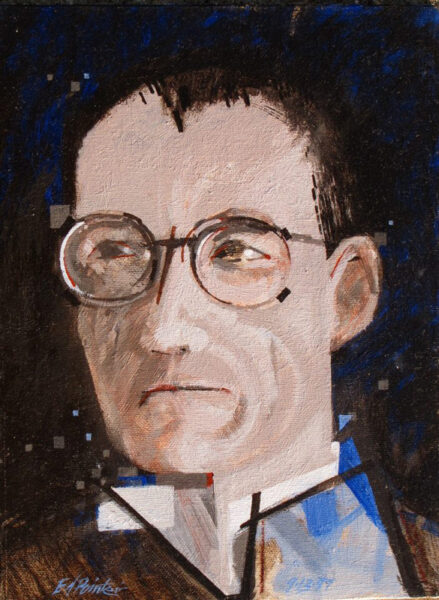 When Ed was recruited by Oblinger-Smith Corporation, a world renowned landscape architecture/city planning firm, as head of the graphics department, I went to work for him and remained there until June 1968 when I graduated from college and accepted my USAF commission. Later, Ed opened his own design firm, Visualgraphics. It became an important firm in Wichita servicing many significant and well known companies. He wanted me to come work for him when leaving the Air Force in 1972, but I wanted to be a freelance illustrator, and he just didn’t have that many illustration assignments.

Because of Ed and my job at Oblinger-Smith, I met the girl I was to marry. I was introduced to my wife by a co-worker who was dating her sister. They too were married. So, through Ed I gained a wife, and several brother and sister-in-laws. 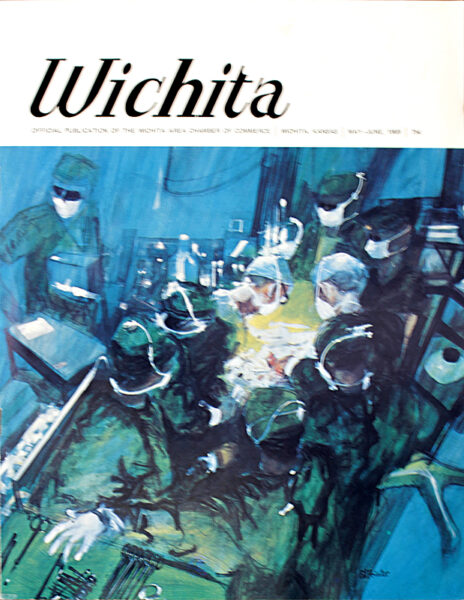 “Open Heart Surgery” – 4′ x 6′ – Acrylic  (This painting commemorates the groundbreaking heart surgery performed by Dr. Michael DeBakey in the 1950s. I purchased this painting in 1971) 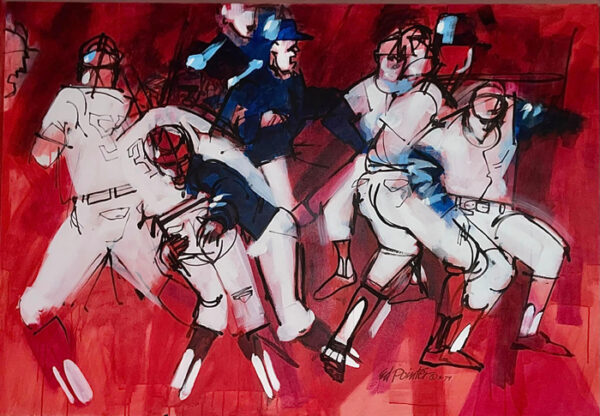 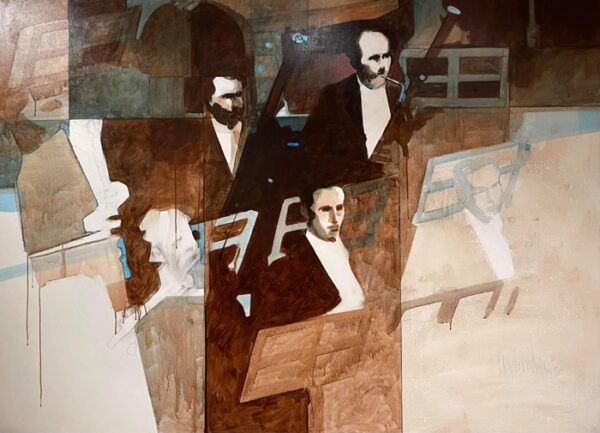 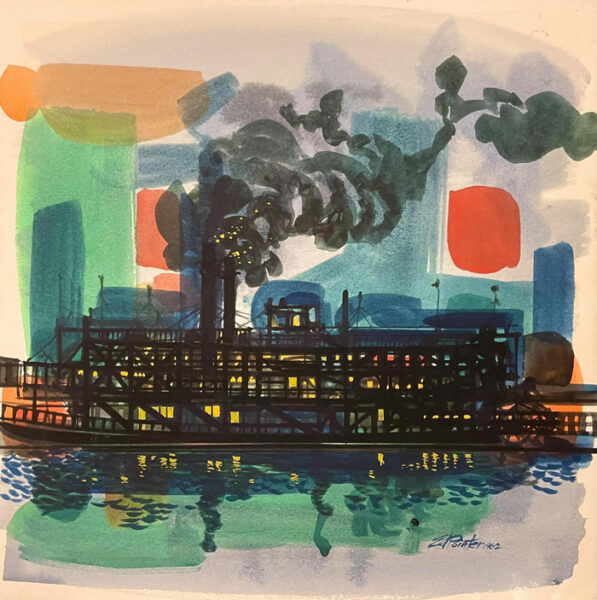 As I look back, I think Ed was most identified with what the Kolbe Personality Test would define as a Fact Finder. Kolbe has identified four action modes/instincts that all people have to varying degrees: Fact Finder, Follow Through, Quick Starter, and Implementer. Ed looked for the best solution to a creative problem and did whatever required to achieve it. He wasn’t afraid to tackle a job even if it required learning a new skill. 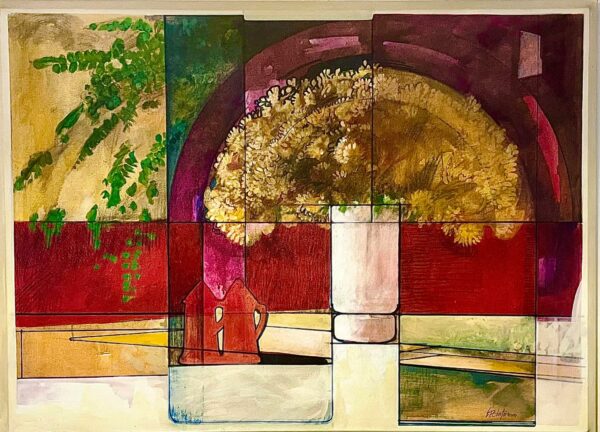 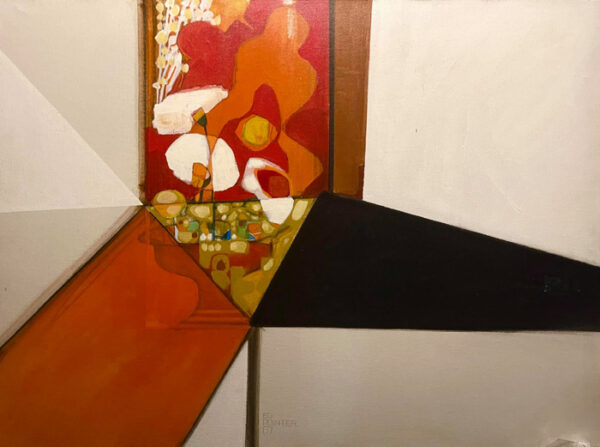 As I got to know Ed, I believe he identified himself as an agnostic. That was soon to change. Not long into my Air Force service at the Los Angeles Space and Missile Systems Organization in El Segundo, CA, I received a letter from him telling me how his life had dramatically changed. He had become a Christian and his faith and trust for eternal life was in the person of Jesus Christ. Being the Catholic boy that I was, this set me back a bit because his transformation and excitement about the Scriptures, and knowing Christ, was powerful…something I did not possess, even though I would have identified myself as a Christian. 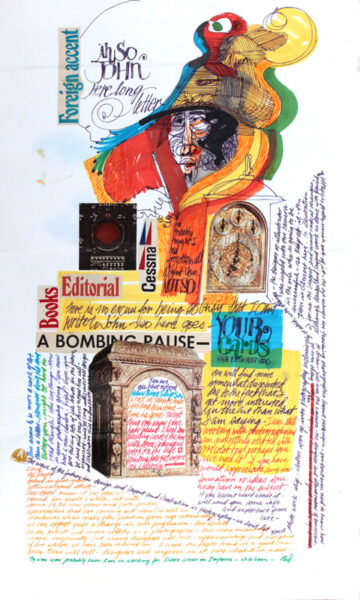 It wasn’t always the case, but Ed’s letters to me were a work of art in themselves. 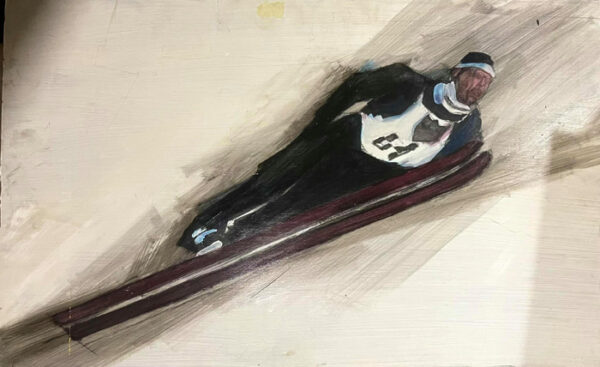 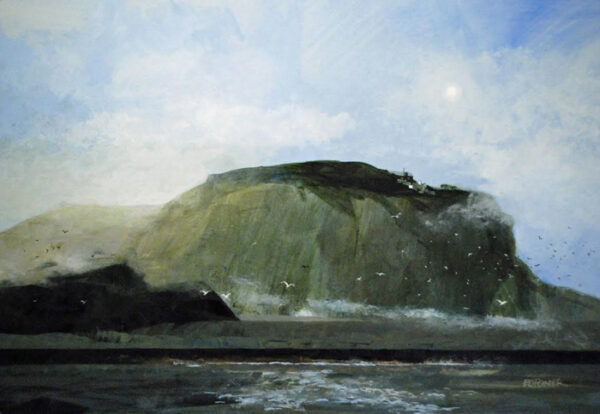 This began four years of steady communication in which we discussed many things. Whenever I’d go back to Wichita I would always visit Ed and his wife Jeanne. Jeanne, now well into her 80s, was the perfect hostess, always smiling and full of encouragement and enthusiasm. We would spend hours upon hours talking. I was full of questions, full of questions related to the world, religion, and the life hereafter. We are blessed with many teachers in life, but not many fathers. Ed was a father, not only my creative mentor but more importantly my spiritual father. He delighted, many times over the years, in calling me his son. He and Jeanne had three children: Michael, Pam, and Cathy…but I was their first and oldest; at least that’s what Ed says. I just consider it a great honor to be associated with this family. 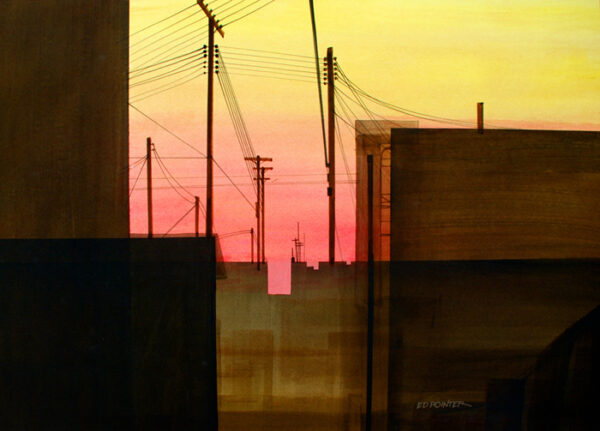 Ed was not a lazy Christian, he became a serious student of the Word, devoting many years of his life to study and teaching. With all of the instruction received and absorbed…and through the work of the Holy Spirit in my heart…in October 1972 when I gave my life to Christ, Ed became my teacher. He also recommended a Bible Church in Dallas that my wife and I began attending. That led to another long relationship with twin brothers, both illustrators, both Christians, in which we shared office space for several years while pursuing our commercial art careers. Anyway, when Ed became my spiritual mentor, he had me purchase several important Bible study helps, and then proceeded to teach me how to use them and how to study. “Context, context, read and study all Scripture in its context.” He would gently correct me whenever I would quote a Scripture verse using an inappropriate context. His instruction was a profound help to me, Ed was what the Scriptures call a Berean. They were an ancient people that seriously searched the Scriptures to make sure what they were being taught was in line with Scripture. If it wasn’t they rejected it. That’s how I discovered my religion and exercise of it was shallow. Moving away from Catholicism at that point was easy. I felt a tremendous burden had been lifted from my shoulders. 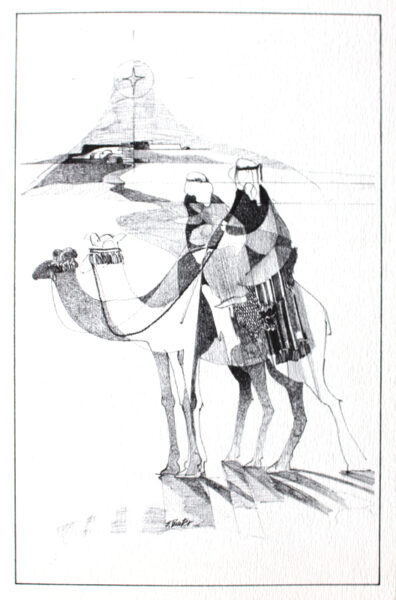 One of Ed and Jeanne’s annual Christmas cards.

So now my dear friend sees first hand that his faith was not in vain. Jesus said, “I am the resurrection and the life, he who believes in Me will live even if he dies, and he who lives and believes in Me will never die.” The Scriptures also say that “true faith is the assurance of things hoped for, the conviction of things not seen.” Anything short of absolute assurance and conviction concerning one’s eternal destination will ultimately end in unfulfillment and disappointment. Conviction is possible to have, but assurance is another matter all together. For many, assurance is not assurance at all, but really only a hope. In another place the Scripture says, “If you confess with your mouth Jesus is Lord, and believe in your heart that God raised Him from the dead, you shall be saved; for with the heart man believes, resulting in righteousness, and with the mouth he confesses, resulting in salvation. For the Scripture says, ‘Whoever believes in Him will not be disappointed.'”

Ed’s hope is now fully realized, and the things that were not seen are now seen. He is not disappointed, he lives forever in Christ Jesus.

What a life, what a man, what a family! Forever I will love them.